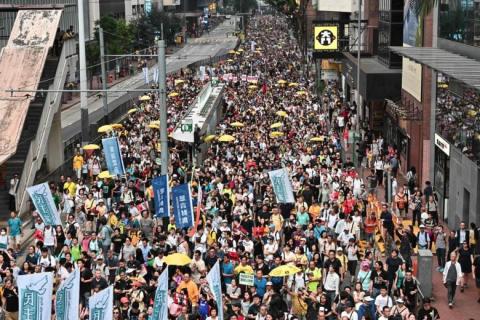 It is not just the total censorship of the Google-created-Social Credit System that makes the Hong Kong riots so very important to Americans. At the heart of the issue is the extradition agreement between Hong Kong and Communist China that makes this issue critical for not just Americans, but every person in the world.

The United Nations has long desired an international system of justice in which national laws and sovereignty are abandoned in favor of Napoleonic code of justice where the accused has no rights and is forced to prove their innocence as opposed to “innocent until proven guilty” principles of justice.

People of Hong Kong know their past and contemporary history well. They clearly understand that they can be extradited to the corrupt and deadly Communist Chinese system in which a crime, as innocent as minor rebukes of a governmental policy, or noting government corruption can get one extradited to the Chinese prison system. Once extradited, many healthy Chinese have organs excised from their bodies. In many cases, the operations take place with no medical safeguards and death is a frequent outcome.

From the interviews, I have done with experts on the system oft technocracy that the Chinese have fully embraced, there are very predictable outcomes. When political prisoners are ever allowed to leave a CHICOM prison intact, they are “deplatformed”, or “depersoned”. The released political prisoner has such serious restrictions placed upon their lives that no person is relegated to essential status of living in a perpetual state of homelessness. These people are denied the following:

Last year I was interviewing technocracy expert, Patrick Wood. Wood recounted how a lady made fun of a Communist Chinese public use policy on the Internet. The “Men in Black” as I will call them, showed up to her state-owned apartment. The six man panel asked the 21 year-old female questions about Party loyalty, the intention behind the statement and was she planning any subversive action against the State. The young woman replied that she had a bad day and was relieving stress by making what turned out to be a bad joke and she was sorry and would never do it again. She assured the her government accusers that she would never do it again.

The Men in Black left her apartment without arresting her and she thought she had dodged a bullet. Unfortunately, she was wrong. as the following events followed in succession almost exactly one week apart.

People of Hong Kong Understand the repressive nature of the social credit system that Google has developed. Many are wearing masks at the protests os the Communist Chinese CCTV cameras cannot identify and deport them for final disposition to a Communist Chinese prison. the protestors are buying single trip transportation tickets to get to the site of the protests because they cannot be tracked when they pay cash. It is far cheaper to buy the tickets in bulk. However, this bring an identification tag that the people of Hong Kong want to avoid.

If one thinks that this confined to Hong Kong, this would constitute a very naive viewpoint. It is already here. However, with our civil liberties, the process of implementation is slower. The globalists have managed to shift the news media for people under 45 to social media. And the social media system not only censors, but if one says the “wrong thing” there are serious employment implications for the offenders against liberal ideology. Remember, if you want to keep your job and not be banned from social media platforms, then the individual better remember there is no God, there is no Jesus, there are 300 genders, pedophillia is absolutely normal, all white people are evil, and every person illegally entering our country has only the best of intentions as there is no such thing as a terrorist or a drug cartel member entering our country.

If one thinks I am too hard on Donald Trump for not standing up to the evil intentions of Google, perhaps these people would like to reconsider their position are reading this. Donald Trump needs to feel the heat that will make him act against Big Tech censorship unless you want fight the battle the people of Hong Kong are fighting on your behalf at this very moment.