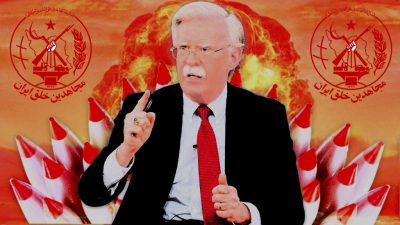 “America’s declared policy should be ending Iran’s 1979 Islamic Revolution before its 40th anniversary…Recognizing a new Iranian regime in 2019 would reverse the shame of once seeing our diplomats held hostage for 444 days.” – John Bolton (January 15, 2018) [1]

Coincidentally or not, America’s ‘maximum pressure’ campaign against Iran began within a month of John Bolton’s installment as National Security Advisor. On May 8th of 2018, President Donald Trump announced the U.S. was backing out of the Joint Comprehensive Plan of Action (JCPOA), otherwise known as the Iran nuclear deal negotiated by the U.S. under President Barrack Obamaalong with the other permanent members of the United Nations Security Council, Germany and the EU in July of 2015. Consequently, the sanctions imposed on Iran previous to the JCPOA were reinstated, and additional sanctions imposed by the end of the year.

In April of this year, the Trump Administration took the unprecedented step of declaring the Middle East country’s military, the Islamic Revolutionary Guard Corps (IRGC) to be a terrorist organization.

Two weeks later, the Trump Administration ended the waivers it had extended to other countries which had to that point allowed them to escape sanctions for purchasing Iranian oil. The aim of this manoeuvre being to strangle the Iranian economy by preventing its ability to profit from the sale of its main source of revenue.

Two weeks after that, Bolton announced the deployment of an aircraft carrier strike group and Air Force Bombers to the Middle East as part of an effort to “send a clear and unmistakable message to the Iranian regime that any attack on United States interests or on those of our allies will be met with unrelenting force.”

The following week, four tankers were attacked in the Persian Gulf. Bolton and Secretary of State Pompeo blamed Iran for the attacks.

America’s choke-hold on Iran’s economy continued to tighten with further sanctions on May 8th of this year, the anniversary of Trump’s JCPOA pull-out.

Two weeks after that, President Trump ordered 1,500 additional troops to the Middle East, and was able to declare an emergency over Iran, allowing the White House to circumvent Congress, and move ahead with arms sales to allies Saudi Arabia, Jordan and the United Arab Emirates.

By early June, the administration started sending out conciliatory signals. The President indicated he, unlike his National Security Advisor, was not seeking regime change in Iran, and shortly afterwards, Secretary of State Pompeo said the U.S. was prepared to engage the Iranians “without preconditions.”

Then, on Thursday June 13, two ships in the Gulf of Oman were fired upon. U.S. officials including Trump are pointing to Iran as the guilty party, although Iranian officials categorically deny the accusation.

Is the world now on a trajectory toward war? Perhaps even a world war? This daunting possibility is at the heart of this week’s Global Research News Hour radio program.

First up, we hear from prominent Canadian intellectual Michel Chossudovsky. Professor Chossudovsky, while not completely ruling out the possibility of a “bloody nose” operation or other forms of economic warfare, argues that the U.S. cannot expect to fight and win a conventional Iraq style conflict in light of developments in strategic regional alliances over the last decade. Chossudovsky explains his reasoning in the first half hour.

Our second guest, Yves Engler, brings a Canadian angle to the conversation by outlining the enmity America’s northern neighbour has expressed toward the Islamic Republic and that has not changed substantially since the more ‘progressive’ Trudeau Liberals took power in 2015. Engler details the factors influencing Canadian policy and how Canadians can hope to redirect relations in a more positive and peaceful direction.