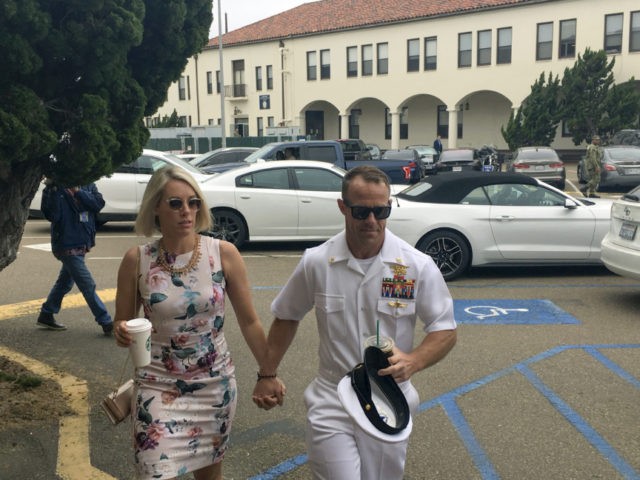 The trial of Navy SEAL Eddie Gallagher resumed Friday with prosecutors expected to call two Navy SEAL snipers to testify on charges he shot at innocent civilians while he led a SEAL platoon deployment to Iraq in 2017.

However, whether the prosecution can recover from a bombshell courtroom revelation on Thursday remains unclear.

On Thursday, the prosecution’s star witness, medic Navy SEAL Special Operator 1st Class Corey Scott, shocked the courtroom by admitting that he was the one who killed a wounded Islamic State in Iraq and Syria fighter, not Gallagher, as he is accused of doing.

According to NBC News, defense attorney Tim Parlatore asked Scott during cross-examination, “How did you do it?”

When pressed why he never admitted doing it before, Scott reportedly said he was never asked.

Gallagher’s defense team emerged from the courtroom on Thursday defiant.

“As I’ve said since the beginning of this case, the best defense for Chief Gallagher is the truth. Today, the truth started to come out,” Parlatore said during a press conference.

He said Scott’s testimony was evidence of a “shoddy investigation”: “No investigator, no prosecutor ever asked, ‘What is the cause of death?’ … What we learned is Chief Gallagher is not guilty of murder.”

Parlatore said he knew to ask Scott further about how the ISIS fighter died after Scott mentioned “asphyxiated” during testimony earlier. “It was something that I heard earlier that stuck out to me… He’s a medic. He’s not just talking about ‘he stopped breathing.’”

Asked about Scott’s testimony that he did see Gallagher stab the wounded ISIS fighter in the shoulder before he was allegedly asphyxiated, Parlatore indicated his memory could be faulty and noted that there was no blood found on the knife or inside the leather sheath of the knife. “All the forensics show there was no stabbing.”

“Perhaps he saw a movement that wasn’t actually a stabbing,” Parlatore added. “Either way, our position is we maintain there was no stabbing.”

Prosecutor Navy Lt. Brian John accused Scott — his own witness — of lying and claimed he was trying to save Eddie by saying he killed the ISIS fighter, especially since he struck an immunity deal with the government.

But Parlatore said he had never heard Scott say he killed the ISIS fighter before. According to a Navy Times report on Thursday, Scott’s confession was something he “had kept inside him since May 3, 2017.”

“Scott never wanted to testify at all. Although the government had forced the testimonial immunity on him — which protects witnesses from having their sworn testimony used against them if they’re charged with a crime — his attorney Ferguson kept pushing for transactional immunity, too. That goes beyond mere words to include what others might say on the stand or other pieces of evidence investigators uncover,” Navy Times‘ Carl Prine reported.

After Thursday’s bombshell revelation, Eddie Gallagher’s wife Andrea Gallagher said at a press conference, “We’ve been patiently waiting for the truth to come out.”

“To hear today that somebody finally had the bravery to stand up for the truth was refreshing after all of these years,” she said.

Bernie Kerik, former New York Police Department commissioner and a close family friend of the Gallaghers’, wrote on Instagram: “At what point does the government admit that this case should have never been brought in the first place?”

On Friday, Task & Purpose reported other shocking revelations recently made by prosecution witnesses. According to the outlet, former Special Warfare Operator 1st Class Dylan Dille on Wednesday admitted that a group of SEALs on a WhatsApp group chat had disparaged the judge in the Gallagher case, joked about burning down the courtroom, and talked about not caring if civilians were killed.

Dille admitted that Navy SEAL sniper Special Operation 1st Class Dalton Tolbert — who had deployed with Gallagher and was slated to testify against him on Friday — had sent a message to the group chat that said he worked “with a bunch of people who don’t care about killing civilians.”