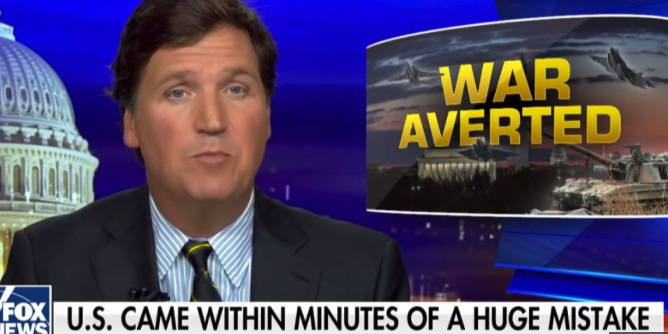 There is speculation on some news sites and in some media circles that Tucker Carlson was the prince of peace who talked Trump down from the brink of bombing Iran to smithereens last week. The mainstream media is not generally inclined to praise a man like Carlson, so there is good reason to place some stock in the accounts that credit Carlson with at least having some role in staying Trump’s hand. One might recall that it was only a few months back that various left-wing activist groups were on a crusade to have Tucker Carlson removed from the air for “racism” or “white supremacy” or something. Well, if he had been removed from the air, there is a damned good chance we would be mired in another fruitless, senseless, endless war in the Middle East. I’d say that fact should serve as a sobering cautionary tale for the political left, which occasionally purports to be genuinely anti-war.

Too many folks on the political left, in their zealous crusade to stomp out “hateful rhetoric”, once upon a time known as “dissent” right here in America, foolishly ignore the real-world consequences of their own zealotry. In the first place, it is impossible to know what good may come from a mind and a voice. Over the last year or two Tucker Carlson has leveled a number of profound and withering critiques against the ruling class in America, critiques that resonate not just with the political right but with much of the political left as well. If he wasn’t on the air, his unique perspectives would never have reached the public. In the second place, there is much hidden money and there are many hidden agendas out there. Just because you like the countenance of a boycott meant to silence someone, or an online censorship campaign, or some other illiberal pursuit, doesn’t mean that is really what is driving that agenda. Tucker Carlson, like many other rightist dissidents, is a thorn in the side of many powerful interests and entities, not just those on the political left or those with benevolent or equitable political goals.

Leftists should be very wary in this day and age about being used to serve agendas they don’t support under the banner of serving some other agenda they do support. Silencing the “haters” may sound all well and good to the simple-minded, but that is almost never what censorship is truly about. Censorship is never a noble pursuit. It is a dirty, foul, immoral business, no matter what sparkling packaging the powerful may wrap it up in.

I have long wondered whether the drive to evict Steve Bannon from the White House was funded and spearheaded by anti-racist leftists, or instead by banksters who opposed his “tax the rich” proposals. I have also often wondered whether the drive to remove Tucker from the airwaves was really and truly about combating muh white supremacy. Could it not also have been about Tucker’s criticism of fundamentalist capitalism, or his lambasting of the Koch Brothers, or even about his rejection of US foreign policy and his commitment to staying out of Middle Eastern wars fought for Israel? The Military Industrial Complex has been known to try and neutralize those who threaten its bottom line, and dressing up one’s vile agenda in the language of combating “hate” and advancing “social justice” is a great way to get what you want nowadays. Sprinkle those magic words around, and all the boneheaded bigots on the left demand blood faster than Usain Bolt fleeing Lena Dunham in a bikini.

Granted, perhaps I am guilty of bias here. I concede that I don’t support ousting people from the airwaves simply because they make arguments which offend people. After all, the truth is rarely aligned with the egos, desires, and delusions of human beings. The pursuit of truth is actually a continuous battle against individual preferences. Thus, to place individual preferences or short-lived comforts above the pursuit of truth, is to call off the pursuit altogether. Thus, even if Tucker Carlson really was a white nationalist, which he’s not, I still wouldn’t support censoring him. That is because I believe in free speech (and free inquiry, mind you), not just as a legal principle, but as a moral one.

Moreover, the arguments as to why removing Tucker from the airwaves is not really “censorship” hold absolutely no water. If the government removed a pundit from the airwaves for his ideas and words, would that be a violation of the principle of free speech constitutionally speaking? Of course it would, and no court would rule otherwise! But if some online mob or powerful cadre of crypto-Marxist activists removes a man’s voice from the airwaves, that’s not a violation of the principle of free speech? Oh, it’s a violation alright, a flagrant one at that. It is not a legal violation to be sure, because the First Amendment doesn’t protect people from censorship by non-governmental entities, but it is, without any doubt, a moral violation. Furthermore, if you claim to believe in democracy, and also support widely enforced speech restrictions, like the incoherent “hate speech” restrictions many low-IQ folks on the left yearn to defend, you don’t really believe in democracy. Not really. If people are only allowed to see and only allowed to say what the powerful decide they can, which is what content-based and viewpoint-based speech restrictions always mean, how could they possibly freely choose a different path for themselves?

The irony of this whole affair is thicker than Linda Friday in a tub of maple syrup. The man much of the political left was trying to purge from TV only a few months back may have just staved off another insane and violent conflagration in the Middle East, at the last second no less. If you thought Iraq was a nightmare, a protracted war with Iran would almost certainly be orders of magnitude more convoluted and horrifying. If Tucker Carlson had any role in guiding President Trump away from making the egregious misstep of kicking off another unbelievably costly, decades-long war halfway around the globe, we are all deeply indebted to him.