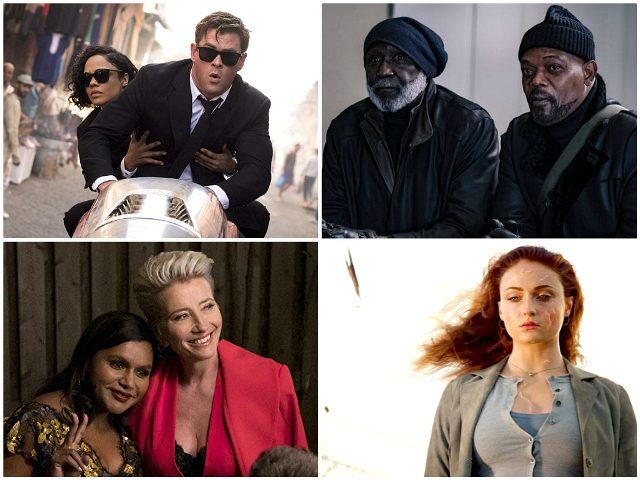 This weekend’s box office wiped out two franchises, cemented the failure of two others, and mercy-killed one of those woke entries only pompous critics adore.

We’ll start with Men in Black: International, which is doing even worse than those already-dire predictions of $30 million. Deadline reports this stinker will open to a pathetic $25 million, which is less than half of what all three of its predecessors opened to. Even the 22-year-old original launched with $51 million in 22-year-old dollars.

As I mentioned in my review, MIB4 has no swagger, no sex appeal, and no laughs; just a confusing story, bad special effects, and a bland leading man who is treated like an imbecile because he’s white and hetero and we must now grovel before the woke.

This is the second franchise Hemsworth has helped destroy by allowing himself to be publicly emasculated. The first was that dreadful Ghostbusters remake.

Samuel L. Jackson’s Shaft had been projected to land in the $15 to $20 million range. In the real world it crash landed at $8 million.

Eight million for a name brand with a name star opening in nearly 2400 theaters.

How is that even possible?

Well, for whatever lunatic reason, Warner Bros. decided to turn a 48-year-old franchise built on grit and testosterone into a lame family sitcom.

The original Shaft, the 1971 masterpiece that currently sits at number 59 on my list of the greatest American movies of all time, personified cool, sex, masculinity, and what it means to be one man against the system. And while I’m as much of a purist as any rabid movie fan, that doesn’t mean I’m unreasonable. For example, John Singleton’s 2000 sequel/remake, which is also called Shaft, is pretty freakin’ great.

But when I saw the trailer for this-third-movie-called-Shaft — you gotta be kidding me. This is like turning the James Bond franchise into a musical, or Tootsie 2 into a psychological thriller, or Caddyshack 3 into a monster movie

What in the world was Warner Bros. thinking?

A franchise about a “bad mother-shut-your-mouth” is now The Aging Bickersons.

There’s a fan base for this brand. Back in 2000, Shaft opened to $22 million and I would have happily stood in line to watch Roundtree take his iconic character into 2019, but that trailer was flat-out depressing.

Another bomb is Mindy Kaling’s Late Night, which was sold as woke-female-of-color-lecture, because we all go to the movies to get talked down to. Oh, wait — actually we don’t, which is why, like a third-wave feminist on her honeymoon, this wide release is just lying there and not doing anything with a pathetic $4.5 million opening.

Rocketman is officially toast. In its third weekend, the Elton John biopic has grossed just $65 million. What was supposed to be this year’s Bohemian Rhapsody will make about a third of that blockbuster.

Bohemian Rhapsody was a PG-13 movie about an extraordinary talent who happened to be a homosexual.

Rocketman is an R-rated movie with a gay sex scene about a homosexual addicted to drugs and sex who sings songs.

Freddie Mercury was not defined by what he did with his penis, he was defined by his artistry and second-to-none showmanship. This is what people want to see, not some sleazy soap opera we’ve already seen a million times.

Also toast is the Godzilla franchise with Godzilla: King of the Monsters earning a pathetic $7 million in its third weekend. This sucker is barely going to break $100 million domestic and $300 million worldwide, which means it’s going to lose close to $100 million.

I just hope the filmmakers enjoyed blaming mankind for everything.

And then there’s Dark Phoenix, whose feminist superpower is the ability to kill a beloved, 20-year-old franchise. With a second weekend collapse of 77 percent, X-Men 10 will sit at a measly $50 million after ten days — which means it will not even clear $100 million domestic and possibly gross less than $200 million worldwide. That adds up to another $100 million loss.