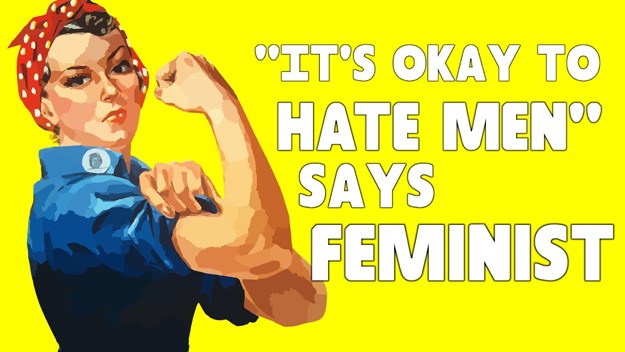 Serious question: Exactly when did feminism go from wanting basic equality to becoming man-hating shrews that want to control, dominate, and belittle men every chance they get, while trying to feminize them into obscurity?

Browsing the internet on Father’s Day one can’t help but wonder why even a day meant to celebrate fathers has to be turned into a male bashing event by feminists that seem to think it should be all about them and their “anger” over just about everything.

Over at NBC News, published on June 15, 2019, two women, Catherine Buni and Soraya Chemaly, decided that Father’s Day is a day where “dads need listen to why their daughters are so angry — and join the fight.”

After running through a whole laundry list of complaints about how unfair life is for women in school, at work, sexually, and how “infuriating” it all is, they then declare “To be truly supportive, fathers need to be allies to women in the fight for reproductive rights. They need to vote for women. They need to listen to and learn from girls and women.”

First and foremost, it is not “reproductive rights,” it is abortion, killing helpless babies inside the womb, or for some liberal states now killing babies right at the moment they are being born.

That quote above pretty much describes how feminists think these days by trying to tell men who they need to vote for (someone with a vagina!) and asserting that men need to “learn” from girls and women……isn’t that in and of itself a sexist declaration?

Then these two angry feminists conclude their piece with the following:

So dads, take this Father’s Day as an opportunity to get angry alongside your daughters. And then get to work helping combat the forces that are making her angry in the first place.

It is all about control to modern day feminists that do nothing in life but look for reasons to be angry and infuriated over what they perceive as unfairness, then because they are so angry they want everyone else to be just as miserable and hate-filled.

The image above perfectly represents how feminists are trying to destroy masculinity, but the shocker here is where the image comes from. GQ.com, formerly known as “Gentlemen’s Quarterly,” which describes itself as “Men’s Fashion, Style, Grooming, Fitness, Lifestyle, News & Politics.”

Yes, an image of a so-called man in a pussy hat and a pink cape wearing an “I’m with Her,” shirt, atop a story published on June 9, written by two feminist women, titled “The Feminist Dad Checklist,” is somehow appropriate for a mens magazine?

If that is not disturbing enough, the “Feminist Checklist for New Dads of Daughters,” supports my belief that somehow a whole new species has infiltrated humanity and they are all part of the feminist and LGBT community.

• Actually, strike that. Girls can wear blue and boys can wear pink because gender is a social construct!

• Actually, strike that. Girls can wear pink because there’s nothing demeaning about overt displays of femininity.

• Also it’s infantilizing to call her a “girl,” even if she is a literal infant. Call her “Womyn-to-Be.”

• Then again, she might not grow up to identify as a woman, so don’t put that label on her either. Just call her by her name!

• Speaking of names, may we recommend something gender-neutral, like Sydney, Alex, or Glorp?

• Then again, why do names have genders to begin with? Call her what you want.

• By which we mean “call her what SHE wants,” because it’s very important to instill agency in your daughter so she’ll grow to understand the power of choice.

• Instead of the usual bedside stories, mix things up with some light feminist theory, like that of Germaine Greer.

• Reminder, though, that like a lot of second-wave feminists, she’s a gender essentialist, so you should probably mix in some modern theory as well.

• Another reminder, though: Feminism, like a lot of sociopolitical identities, is dominated by white cis voices. Just a little something to keep in mind.

• One more small thing to keep in mind: The world is notoriously terrible to women, and no matter what you do, your daughter will come to understand this through the lack of choices, stereotyping, and representation she encounters legally, institutionally, and socially. Probably even within her own family, because none of us—not even you!—can escape the patriarchy.

No wonder children nowadays are so confused.