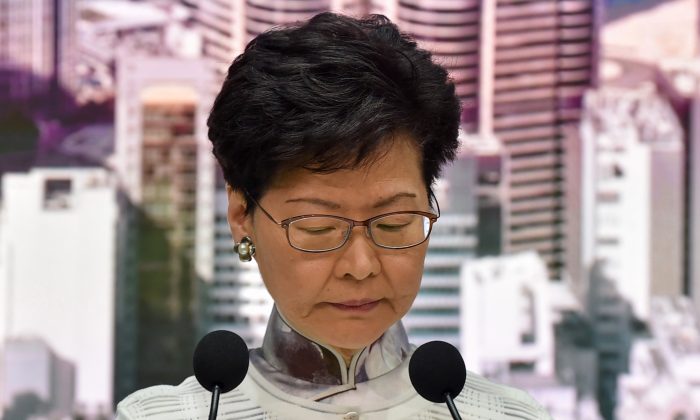 In a press conference held in response to Chief Executive Carrie Lam’s decision to postpone the extradition bill, pan-democratic group Civil Human Rights Front condemned Lam for refusing to completely withdraw the bill and apologize for the police use of force in dispersing protesters, which led to more than 80 people sustaining injuries.

The group, which organized last week’s march that brought more than one million Hong Kongers to the streets to oppose the bill, said they would continue to call for the bill’s full withdrawal and urged all citizens to join another march it has planned for tomorrow.

It also condemned the Hong Kong government’s labeling of protesters as “rioters” and called for the release of all 11 protesters who have been arrested.

It would also continue calling for the “three suspensions”: boycotting classes, not going to work, and shutting down businesses, until the bill is withdrawn.

In a press conference on June 15, Carrie Lam told reporters that the decision was made with consideration of the public sentiment against the bill.

Lam said that it was a necessary measure to restore order in the former British colony as a “responsible government.”

“We have to maintain law and order on the one hand and evaluate the situation for the greatest interest of Hong Kong including restoring calmness in society as soon as possible and avoiding any more injuries to law enforcement officers and citizens,” Lam said during the conference.

“After repeated internal deliberations over the last two days I now announce that the government has decided to suspend the legislative amendment exercise and restart our communication with all sectors of society,” Lam continued, adding that they will halt the bill and have no intention to set a deadline to bring it back.

The proposed bill had seen a week-long stand-off between Hong Kong masses and the government, with nearly 1.03 million people taking to the streets to oppose the bill. Some pro-Beijing officials in recent days also advised her to back down so as to avoid undermining their chances in the 2020 election.

Asked during a reporter Q&A after the press conference whether Beijing had any influence over her decision to suspend the bill, Lam said in Cantonese that it was her decision, made with the support of Beijing.

On June 12, at least 81 people, including several reporters, were injured as police fired tear gas and rubber bullets into the crowd at the Legislative Council (LegCo) in protest of the bill. In light of the public protests, the planned debates were cancelled for three days in a row.

When a reporter pointedly asked Lam why she would not step down after such public protests and police violence, Lam responded: “I have been a public servant for nearly 40 years. I take it as my pride, and I still have a lot of work for Hong Kong that I hope to do.”

She also clarified that legislative debates on the bill would not return to the full LegCo body for a second reading.

The Civil Human Rights Front, a pro-democracy group, had scheduled for a mass protest on Sunday to stop the extradition bill. The group had not indicated that it will call off the original plan.