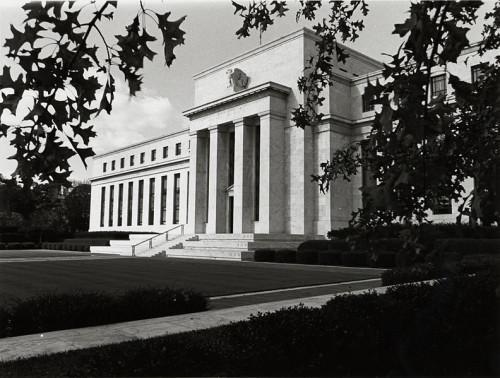 The US deficit this year is already over three-quarters of a trillion dollars, putting the first eight months of the fiscal year almost equal with the entire past fiscal year. It is also $200 billion above the previous record for this portion of the year, and this May’s deficit alone was 40% higher than last May’s.

The previous deficit record was set in the middle of the last recession, which means the government is already spending more than it did to try to pull us out of the last financial crisis. In spite of all of this fiscal stimulus, the economy appears to be receding on many fronts.

QT is QE on the QT

I’ve laid out in earlier articles how the Fed’s member banks may already be feeling a liquidity squeeze that will force them to stop refinancing the government from their excess reserves, which are in excess no more, until the Fed restarts quantitative easing. (See “Liquidity Stress Fractures Begin to Show in the Federal Reserve System.”) I think that will play out next year, but for now the Fed is continuing to intentionally tighten the system.

The Fed built up those excess reserves in its member banks in order to make the bank’s more “robust” against future problems … like crops failing across the midwest because they never got planted, leaving farmers to default on loans. A graph in the above referenced article shows those excess reserves are rapidly depleting (by 50% so far), meaning banks are becoming less capable of weathering future problems.

The depleting of those member-bank reserves as the Fed continues its QT is a covert form of quantitative easing (QE) because, as the Fed draws down its balance sheet by letting bonds mature so the government has to pay them off, money is flowing out of the reserve accounts of the Fed’s member banks and to the government to buy up new government bonds so the government can refinance that debt and new debt for its current spending. The new-debt money that goes into the government keeps the government buying goods and services and paying employees and so stimulates the economy and becomes a major part of measured GDP, weak as it now is.

What happens to interest on a massively and rapidly growing government debt when the second tier of lenders of last resort — the Fed’s member banks with their easy money — have spent out all their excess reserves and, so, have to stop? It seems to me you have only two choices — interest on the national debt soars at that point of low liquidity when banks cannot deplete their reserves any further to soak up government debt because their depleted ability forces the government to find other creditors who are not so robust with extra cash, OR the Fed goes right back to QE and has to reverse its whole tightening regime in order to keep monetizing government debt.

The latter, of course, is the scenario I’ve said for years you can bank on. The Fed’s recovery was unsustainable from the onset and requires ever greater amounts of QE, because QE is getting tired … really tired. Because its big numbers create shock and awe no more, the Fed gets less bang for the buck.

By September, QT will be finished, and the Fed will be back to lowering interest rates (probably staring in July). By next year it will become obvious that ending QT and cutting rates is not enough. In fact, it will be hard for the Fed to get its base rate, the Fed funds rate, down any lower than it already is without reverting to more QE; so, the Fed will have to rewind its rewind (rewind its recent attempt at balance-sheet reductions) and go right back to overt QE to keep the government from ever facing skyrocketing interest when its member-bank reserves get too tight to continue the covert QE.

That means it’s rinse and repeat of the last cycle, except this time FedMed won’t work because we’ve all been here before and all know now the Fed has no end game. The Fed can never tighten again, so it is QE4-ever, which will cast a dismal pall over the already waning global economy. (That’s a teaser for next year because I’m not quite ready yet to say where next year is going in any specific way, but it reveals the overall direction I think is most likely.)

Meanwhile, what could scream “recession” more confidently than this:

CME Group’s FedWatch Tool has the odds of a rate cut by end of next month at 79.4%, 95.2% by September 2019, and then a staggering 98.6% by the end of 2019. Talk about confidence that rates are indeed heading lower. JPMorgan was the first to jump the shark, changing their forecast to two rate cuts by the end of 2019, while Barclays quickly followed suit and upped the ante, changing their forecast to a stunning three rate cuts by the end of 2019. These forecast revisions are “seemingly” being confirmed by recent figures being released, most notably the latest US job numbers, which just missed the mark in a significant way.

You don’t start slashing rates like that (or expecting the Fed to slash rates as quickly and as often as that unless your true outlook is that you see the economy rapidly heading into recession. The last time the New York Fed’s yield-curve model (the difference between 10-year bonds and 3-month bills) looked as recessionary as it became this May was near the start of 2007 and we tipped into recession by the end of that same year. By the time it got to this same level in 2001, we were ALREADY IN a recession:

The end of confidence in the con game

President Trump recently denigrated the Fed as “very, very disruptive” because it didn’t listen to him, so it raised rates too much and should not have done quantitative tightening. In a way he’s right because I’ve always said here that the Fed could not possibly do what the tightening it said it could, which it also said would be “as boring as watching paint dry.” (Of course, the real problem is that it ever did QE in the first place.)

And the Fed knows it. In a recent Premium Post, title “Teasing out the Fed’s Big Plan for our Future,” I laid out in the Fed’s own candid words how concerned about “declining trust in public institutions.” I showed how its words really add up to its being concerned over its failing reputation because Powell kept talking about the Fed having to work “hard to build and sustain the public’s trust” in order to retain its “monetary policy independence.”

That all means, if you think the good times are going to keep rolling because the Fed is coming to the rescue, think again. We are moving into deeper tariffs, diminished bank reserves, higher government interest on skyrocketing new debt as far as the eye can see at a time when we have a Fed that has been weakened by the failure of its last plan and by the president slashing away at it.

If you think the latest bad news like rising unemployment, fewer new jobs, falling GDP, diminishing corporate earnings are good news because it all means more Fed free money, rethink. The nation is more fed up with the Fed than ever and is overfed on debt. The next round of lower interest and renewed QE are nothing more than proof that FedMed failed.

Now that failure is being underscored by the president of the United States saying the US money managers are all a bunch of loser, dunderheads:

Trump told CNBC’s Joe Kernen on ‘Squawk Box.’ ‘Our Fed is very, very disruptive to us….” The Fed chairman is navigating three discrete challenges: setting a policy to extend what is already a 10-year-old expansion, explaining clearly why the Fed does what it does, and ignoring the loudest public Fed badgering from a president in recent memory.

Trump bemoaned the Fed’s unwillingness to submit to his control and tried to distance himself from the Fed, even though the people he is most upset with were his appointments:

They haven’t listened to me…. We have people on the Fed that really weren’t, you know, they’re not my people, but they certainly didn’t listen to me because they made a big mistake. They raised interest rates far too fast. That’s number one. Number two, they did quantitative tightening.

When the president of a nation is shaking a big stick at its central bankers, claiming they are disruptive, don’t take orders and have “made a big mistake,” that can bring the nation to a crisis of confidence in its syndicate of banksters. When the president is right in claiming their tightening failed (we all saw it happen), it makes the tightening look like a big mistake.