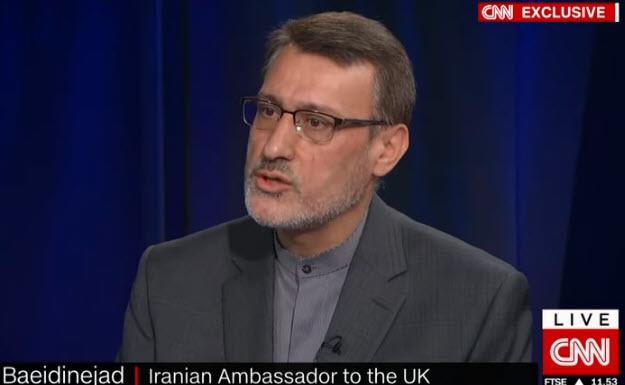 The Iranian Ambassador to the UK Hamid Baeidinejad warned that the United States and Iran are “unfortunately headed toward a confrontation which is very serious for everybody in the region.”

In an interview with Christiane Amanpour, the Ambassador reacted to rapidly escalating tensions between the two countries – late on Monday the US announced it was sending another 1,000 troops to the Middle East – as the United States continues to blame Iran for an attack on two oil tankers in the Gulf of Oman.

Ambassador Baeidinejad, a senior Iranian official within the Foreign Ministry, denied the allegations, and cautioned the White House would be “very sorry” to underestimate Iran, should a military conflict ensue. Baeidinejad stopped short of predicting the possibility of U.S. plans for a limited strike in the Persian Gulf, but argued that such plans may already be underway in a bid to spark a fight.

“I’m sure this is a scenario where some people are forcefully working on it, they will drag the United States into a confrontation. I hope that the people in Washington will be very careful not to underestimate the Iranian determination,” Baeidinejad told CNN. “If they wrongly enter into a conflict, they would be very sorry about that, because we are fully prepared by our government and our forces that we would not be submitting to the United States.”

He explained that Iran was not opposed to negotiations but that the U.S. should “not interfere” Iran’s economic relationships with other countries, a tactic he referred to as “economic terrorism.”