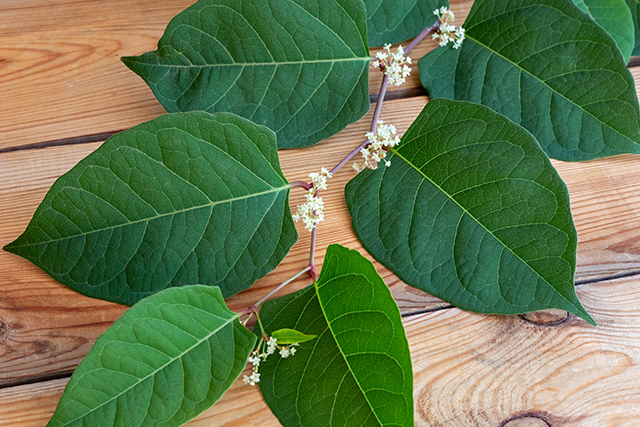 Japanese knotweed or Polygonum cuspidatum is a perennial plant that belongs to the buckwheat family. While it is considered to be an aggressive weed by many, it is also edible — at a certain time of the year. Japanese knotweed also contains vitamins and minerals and has been used in traditional medicine for centuries. In a study published in the journal BMC Complementary and Alternative Medicine, researchers from Guangzhou University of Chinese Medicine in China investigated the bioactivity of Japanese knotweed against hepatocellular carcinoma (HCC). They discovered that the roots of Japanese knotweed are good sources of STAT3 signaling inhibitors, which are now being studied for its potential anticancer properties.

What is Japanese knotweed?

Japanese knotweed is a herbaceous flowering plant with vigorous rhizomes that allow new shoots to spring up very quickly. Due to its rapid growth and spreading, Japanese knotweed is included in the International Union for Conservation of Nature (IUCN)’s list of the 100 most invasive plant species. Other factors that make Japanese knotweed a pest are its strong roots that can break walls and pavements, its resilience to cutting, and its ability to grow densely and clog waterways like canals and streams. In the U.K., the cost of eradicating Japanese knotweed has reached £2.6 billion.

While Japanese knotweed causes many environmental problems, it also comes with plenty of health benefits. It is listed in the Pharmacopoeia of the People’s Republic of China as a medicinal herb. Known in traditional Chinese medicine as hu zhang, it is used to make formulations designed to treat coughs, hepatitis, jaundice, amenorrhea, leucorrhea, arthralgia, burns, and snake bites. Several studies have also attested to its antiviral, antimicrobial, anti-inflammatory, neuroprotective, and cardioprotective abilities. Japanese knotweed contains high amounts of a cholesterol-lowering compound called resveratrol.

Japanese knotweed is like rhubarb; not only does it have a similar taste, but not all of the parts of Japanese knotweed are edible. For instance, its shoots only become tender enough to eat during the spring. Mid-April to May is the ideal time to eat them. For people who are willing to try, Japanese knotweed can be included in various recipes, such as purees, jams, sauces, fruit compotes, soups, wines, and ice creams. In Vietnamese cuisine, Japanese knotweed is used to make a noodle dish.

For their study, the researchers isolated and identified small-molecule STAT3 signaling inhibitors from the root extracts of Japanese knotweed. They used ethyl acetate as a solvent to obtain the extracts and employed various column chromatographies and preparative HPLC to isolate the active components. They also used NMR, MS, and IR analysis to determine the chemical structures of the components. Finally, they performed MTT assay, tumorsphere formation assay, and flow cytometry analysis to evaluate the effects of the active components on the growth of human HCC cells, the self-renewal capacity of HCC cancer stem cells (CSCs), and their cell cycle and apoptosis, respectively.

STAT3, or signal transducer and activator of transcription 3, is an oncogene that is constitutively activated in HCC cells and HCC CSCs. It allows HCC CSCs to retain their stem cell characteristics, giving hepatomas the ability to relapse, metastasize, and become resistant to drugs. Because of this, STAT3 is considered a good target for HCC anticancer therapies. (Related: Wormwood, most known for its use in absinthe, found to be highly beneficial in preventing liver cancer.)