Finally it happened although it took 6 long years to break through The Gold Maginot Line at $1,350!

This resistance was a lot stronger than the original French one in WW II since it took the Germans less than a year to penetrate it in 1940.

But we must remember that the rising gold price is a warning signal for the coming economic crisis.

In my article on February 14th I said.

“No one must believe that the line will hold. It is extremely likely to be penetrated conclusively in 2019 and most probably within maximum the next three months.”

It took four months for the break to happen so I was one month out. Still it had to happen. I also said in the article that:

“once it is broken, the correction of gold is finally over and we are on our way to new highs and much beyond.”

So that’s where we are today. The break has now finally taken place and I doubt that we will see $1,350 decisively broken on the downside in my lifetime. The 6 year resistance line has now become an extremely strong support line. 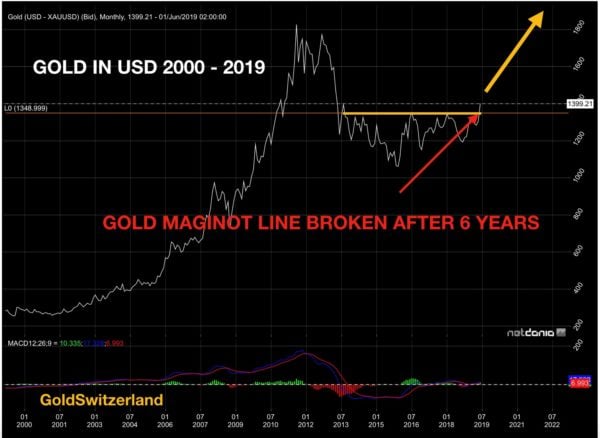 Yes, gold will go quickly to $1,650+ on its way to new highs and far above that. As I have said many times, we will see levels that no one can imagine today.

The precious metals rally hasn’t really started yet. Gold has moved up $125 since May 30th but silver is lagging behind with the gold/silver ratio at over 92, a new high for this century. The paper silver shorts are fighting a desperate battle to hold the white metal down. They will eventually fail of course, although we could see the ratio going a bit higher before it turns. Once the turn comes, the silver price will explode and go up more than twice as fast as gold. If the ratio reaches the 30 level as in 2011, silver will go up 3x as fast as gold. When gold reaches $2,000, silver should reach $66. But that is only the beginning. But we must remember that silver is extremely volatile and not for the faint hearted. 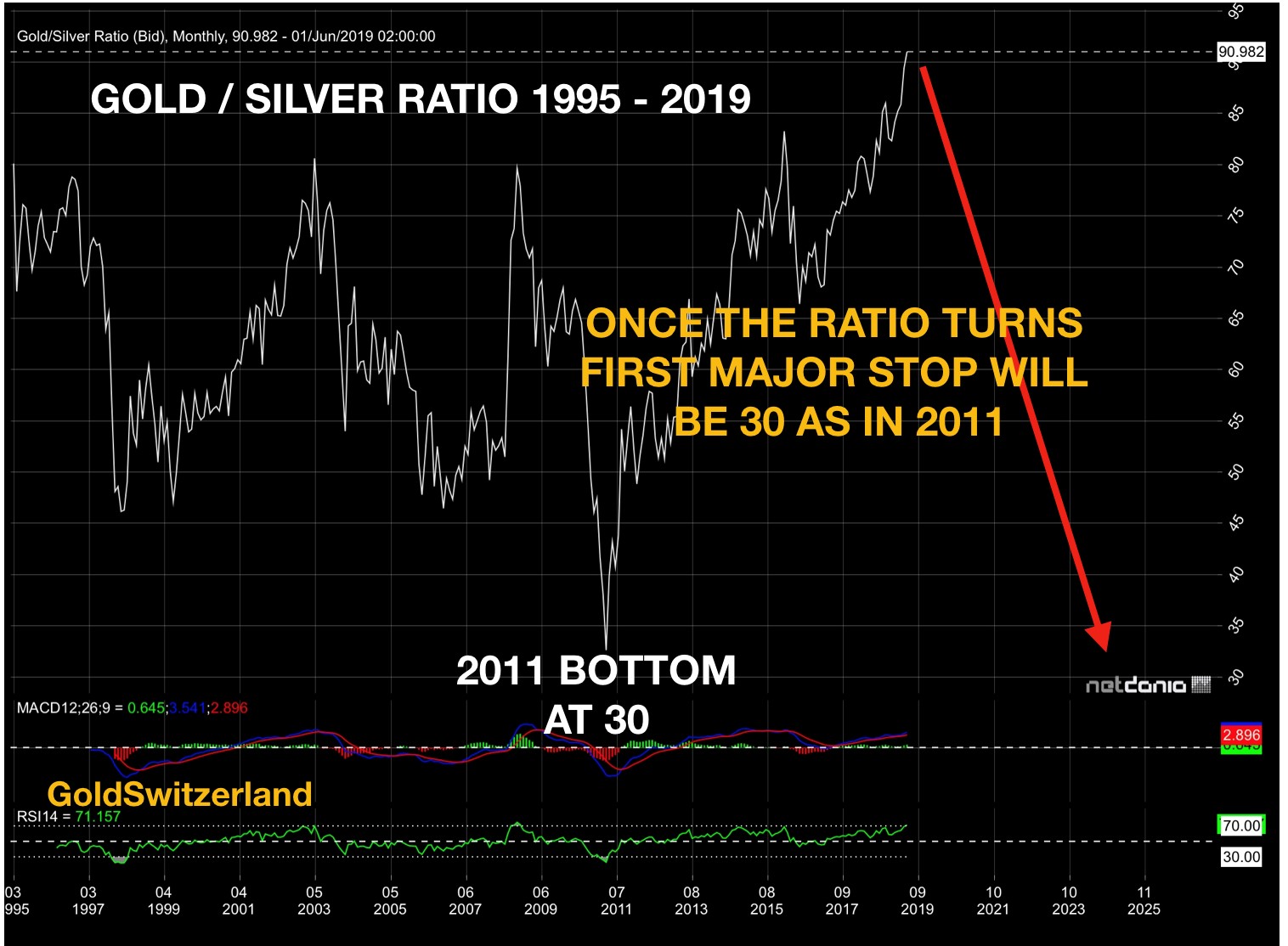 Platinum has not yet joined gold and is creeping along the bottom at levels seen in 2004 and 2008. At some point, platinum will take off and most probably move a lot faster than gold.

DOLLAR HAS STARTED ITS JOURNEY TO PERDITION

Finally, the dollar now seems to be starting the journey to zero. It clearly won’t happen overnight but it is guaranteed that we will see the end of the dollar and its reserve currency status in the next few years. 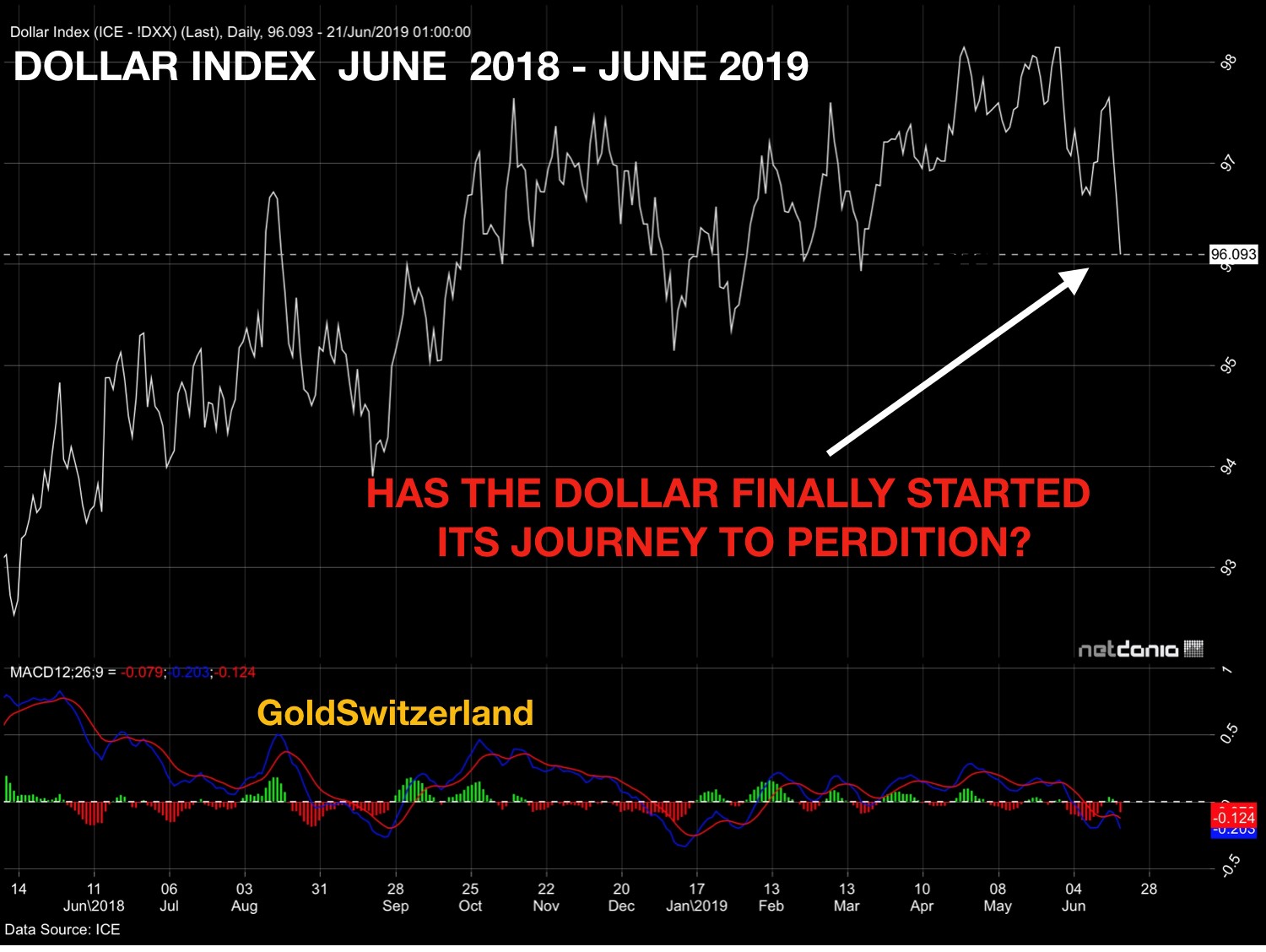 GOLD IS NOT AN INVESTMENT BUT WEALTH PRESERVATION

Many savvy investors are now talking about gold and the potential for much higher prices, just as I have done above. But we must remember that we are not holding gold as an investment but for wealth preservation purposes in order to protect against a rotten financial system, and a bankrupt global economy.

Gold is not held for short term gains but as insurance against the massive risks we see in the system. We are not in gold to take part in a price move. Instead, gold is the consequence of our analysis of global risk which is at an extreme. At the same time as many impatient holders of gold are now rejoicing over the price move, we must remember that the very strong rise of gold that we are about to see, is a warning signal of very difficult times ahead in the world which I have been discussing many times. I obviously don’t want to be a joy killer so let’s enjoy this first proper rally for six years.

THE ILLUSION IS OVER AND THE DARK YEARS ARE HERE

But let us at the same time realise that we are in the next phase going to experience the Dark Years that I have written about in the past.

The Dark Years are the consequence of a world that for decades has lived above its means, in the belief that credit and printed money can bring prosperity. We will soon experience that this has all been an illusion which will painfully turn into a harsh reality. That means, an implosion of debt markets and also of all the bubble assets that have been financed by the debt.