Based on the findings of our gold price framework, we have long argued that we have entered a new gold cycle. However, until now, there was always the risk that strong economic growth could allow the Fed to raise rates above what the FOMC members themselves expected was possible. As markets and the Fed itself rapidly adjust to the new reality of a slowdown in economic growth, those risks have subsided, bolstering our conviction that the next gold cycle is about to unfold.

In 2018 we published a 3-part series “Gold Price Framework Vol. 2: The Energy Side of the Equation” in which we presented our revised gold price model (part 1), took a deeper dive into the link between longer-dated energy prices and gold by doing an in-depth analysis of the energy exposure of gold mining companies (part 2), and gave an outlook for gold prices (part 3).

For those unfamiliar with our model, we recommend reading at least part 1 to get a better understanding of our findings in this report. In a nutshell, we found that the majority of changes in gold prices can be explained by just three drivers: Central bank policy (more specifically real-interest rate expectations and QE), changes in longer-dated energy prices, and central bank net gold purchases (the least important driver). These three drivers can explain over 80% of the year-over-year changes in the gold price (see Exhibit 1). 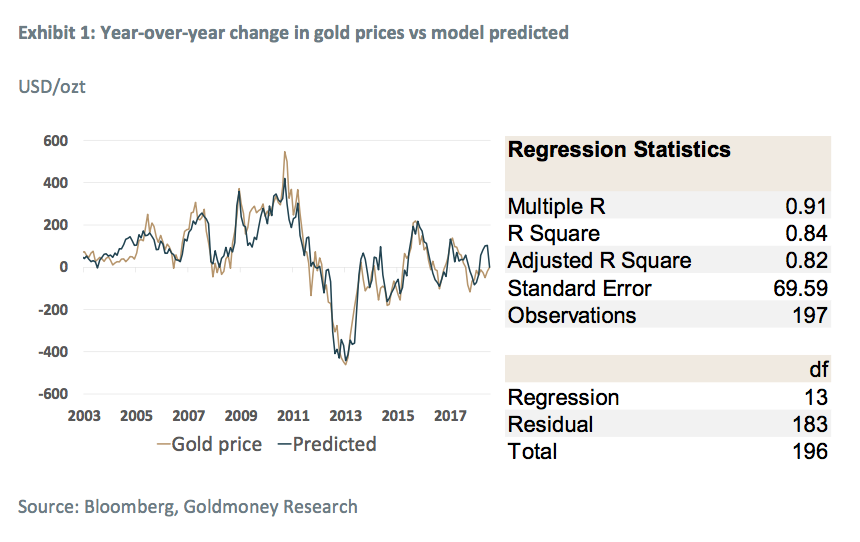 Based on the outlook for the main drivers of the gold prices, we reiterate our view that the risk to gold prices is clearly skewed to the upside, a position we are holding since early 2016. While our bullish view on gold remains unchanged, there is a clear change in our conviction level. For the past three years we have held the view that we are in a new up-cycle but we always maintained a somewhat cautious stance as we could see a near-term scenario where the Fed was able to continue to raise rates on the back of an acceleration in economic growth. We now think that this risk has all but vanished, with global economic growth pointing down, the FOMC members themselves cutting their future rate expectations and the market beginning to price in rate cuts rather than further rate hikes. In other words, the next cycle is about to unfold.

current gold price cycle started at the end of 2015…

Since we have presented our gold price framework the first time in late 2015, we have argued that we have entered a new cycle in the gold market. At the time we believed that longer-dated oil prices (5-year forward Brent) had likely set a bottom in late 2015 (at US$47/bbl, now US$60/bbl) and that real-interest rate expectations (10-year TIPS yields) were close to their cycle peak at 0.8% (now 0.3%) (see Exhibit 2). Our view was that – while there was some room to the downside – risk for gold prices were clearly skewed to the upside. While we weren’t extremely bullish near term for longer dated energy prices[1], the reason for our bullish view on gold was that we saw much more downside risk than upside risk for real-interest rate expectations. 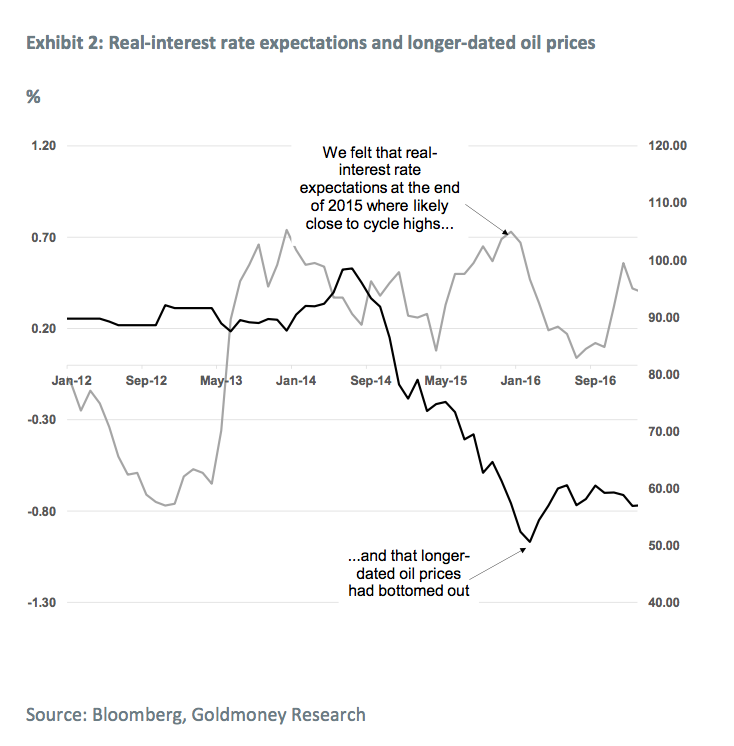 By the end of 2015, the FOMC members were predicting terminal Fed funds rates at 3.5% (see Exhibit 3). The Fed also has a PCE (Personal Consumption Expenditure) inflation target of 2%, which, in our view translates into CPI (Consumer Price Inflation) of around 2.5-3% that is embedded in TIPS yields. Thus, we expected TIPS yields not rise much above 1% even if the Fed was able to raise rates as many times as it signaled at the time. 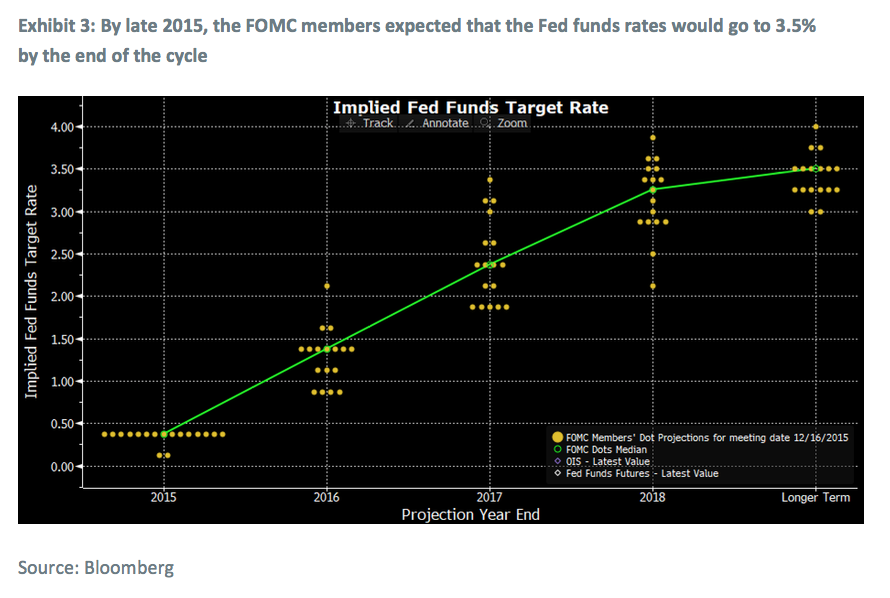 However, we also acknowledged that there was significant uncertainty about the path of real-interest rate expectations for the next few years. The Fed’s famous dot plot simply shows what the FOMC members expect for future nominal rates, not their stated target. A sharp pick-up in economic activity could allow the Fed to raise rates further. In our view, a “normal” 10-year treasury yield of 5-6% would have had quite a strong negative impact on gold prices. Assuming that the Fed would stick to its inflation target of 2%, real-interest expectations would most likely be around 2-2.5%[2]. All else equal, our model would predict gold prices to drop below US$1,000/ozt in such an environment.

In the aftermath of 2016 US presidential elections, that was exactly what the market started to price in. The market hoped that deregulation would unleash economic growth that would offset the negative impact of the Fed unwinding its balance sheet. And for a while, it looked like the economic environment in the U.S. did indeed gain steam and surprised both the market and the Fed. In turn, the FOMC members started to raise their expectations for terminal rates from just 2.75% back to 3%.

While this pushed 10-year inflation expectations from 1.2% in early 2016 to 2.2% in 2018, nominal rates rose even more quickly as the Fed was finally able to raise rates multiple times a year, pushing the 10-year Treasury yield to 3.2% in late 2018. The result was that real-interest rate expectations rebounded one more time to 1.2% (see Exhibit 4) 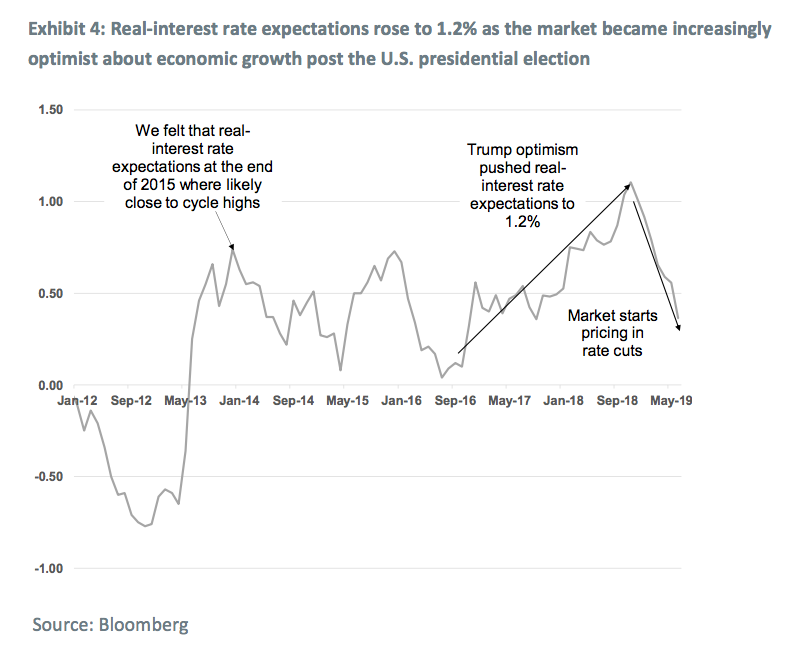 Gold has predictably struggled a little bit in this environment, but the dreaded gold bear market scenario never materialized.  The price of gold was close to US$1,300/ozt before election day and it was down less than US$100/ozt by the time we saw peak rates late last year, despite also being in a bearish energy environment.

Part of the reason for this resilience is that, while the Fed tightened monetary conditions by raising rates and unwinding its balance sheets, central banks globally continued to ease, and total central bank assets are right now at an all-time high. This also explains why gold prices in some other currencies are also at all-time highs. On net, the up cycle that started in 2015 remains intact, and it just got confirmed by the Fed.

…and it just got confirmed by the chairman of the FED

The optimism about the pick-up in U.S. economic growth proved to be short lived, and over the past couple months, the FOMC members gradually lowered their expectations to 2.5% (see Exhibit 5) and, more importantly, slashed their expectations for the Fed funds rate by the end of 2019 to just 2.375%, implying zero hikes.