This article is a wake-up call for those who do not understand the true purpose of monetary inflation, and do not realise they are the suckers being robbed by monetary policy. With the world facing a deepening recession, monetary inflation will accelerate again. It is time for everyone to recognise the consequences.

All this year I have been warning in a series of Goldmoney Insight articles that the turn of the credit cycle and the rise of American protectionism was the same combination that led to the Wall Street crash in 1929-32 and the depression that both accompanied and followed it. Those who follow statistics are now seeing the depressing evidence that history is rhyming, though they have yet to connect the dots. Understandably, their own experience is more relevant to them than the empirical evidence in history books.

They would benefit hugely from a study of the destructive power of the Smoot-Hawley Tariff Act combining with the end of the 1920s credit expansion. The devastating synergy between the two is what crippled the American and global economy. And as we slide into a renewed economic torpor, contemporary experience tells us the Fed and all the other central banks will coordinate their efforts to restore economic growth, cutting interest rates while accelerating the expansion of money and credit. The current generation of investors argues that this policy has always worked in the past (at least in the past they have experienced) so the valuation-basis for financial assets and property should stabilise and improve.

This brief summary of current thinking in financial markets ignores the fact that a catastrophic tariff-cum-credit-cycle mixture is baking in the economic cake. Crashing government bond yields, reflecting a flight to relative safety, are only the start of it. If the 1929-32 comparison is valid, today we have the additional problems of excessive government debt coupled with consumer debt, and hundreds of trillions of over-the-counter derivatives adding to systemic risk. The banking system all but collapsed in the 1930s, as banks desperately dumped collateral assets into falling markets. This time, the debt is not confined to industry; a debt contraction will hit consumers directly and threaten domino defaults in OTC derivatives as well.

Obviously, this cannot be permitted to happen. Whatever it takes to prevent a debt-deflation spiral developing is de facto official policy. The only solution central bankers have is to flood the economy with a tsunami of interest-free money, which will be in addition to the monetary expansion which has continued since the Lehman crisis.

As our tariff and credit cycle mixture bakes in the economic cake, infinite monetary inflation will be the response. At some point, financial markets will wake up to the consequences. It could be sudden and relatively soon. The chart below, of the euro-dollar exchange rate warns us that the two most important fiat currencies are about to experience a sudden change in their relationship, likely to have far-reaching consequences. 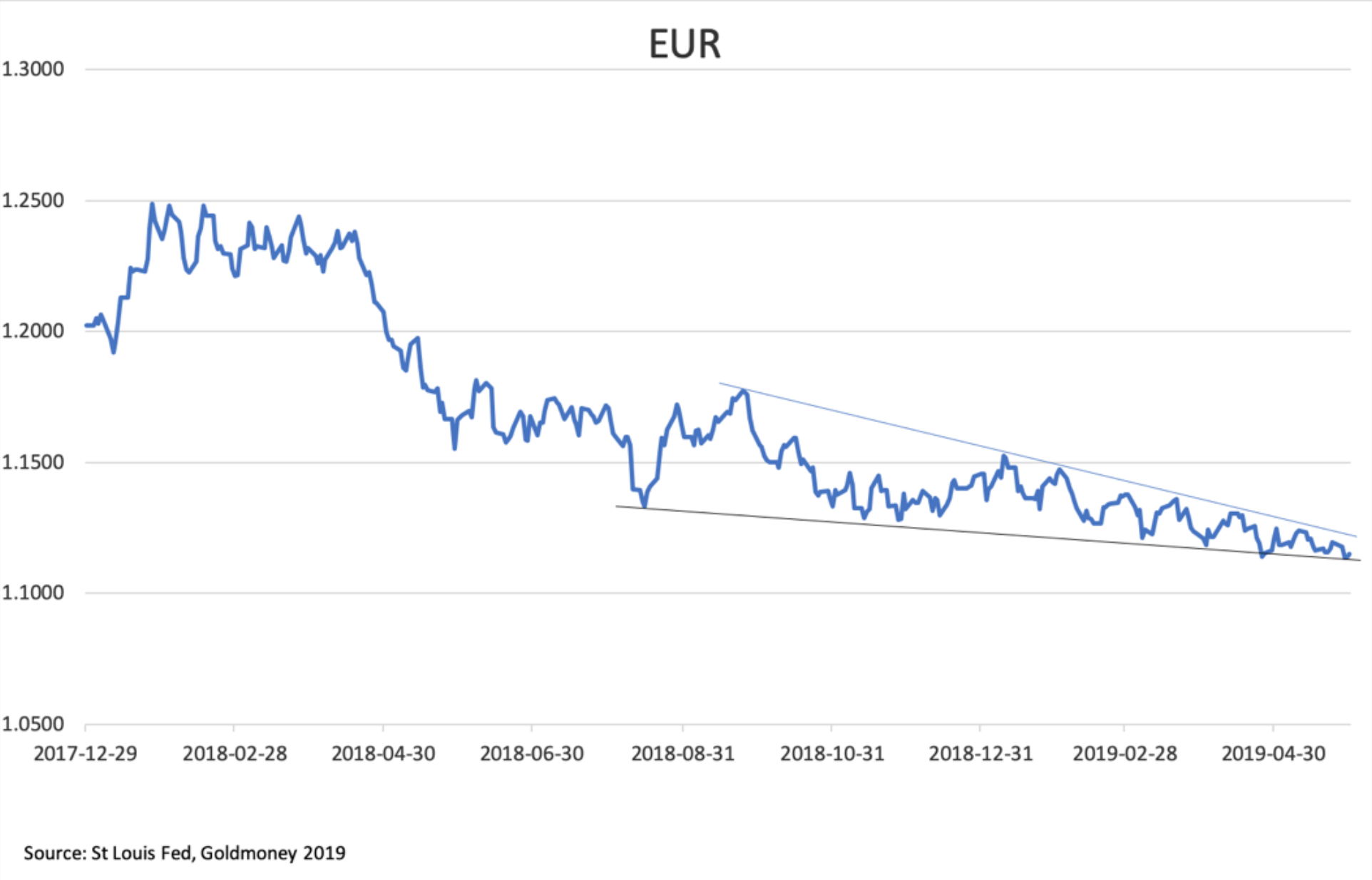 For the last ten months, the euro has been falling in the confines of a triangular pattern. It resembles a falling wedge, from which a substantial up-move for the euro could develop. However, falling wedges usually last no more than a few months, and this one is nearly a year old. It could also be a descending triangle, but a purist would argue the pattern should be more horizontal. That would be sharply bearish for the euro, which is easy to imagine, given the political, economic and systemic issues faced by the Eurozone. Time will tell which interpretation is correct, but either way there appears to be imminent currency volatility when the pattern breaks. With such a warning, we must expect consequences.

This could be an important clue on timing: we shall see. Besides assessing the immediate implications for financial assets around the world, we must also look at the consequences of the increase in monetary inflation about to be inflicted upon us. It is a subject of which there is widespread ignorance, not just at street level, but in the highest levels of finance as well.

Keynes described aptly the extent of this ignorance in his The Economic Consequences of the Peace, published one hundred years ago today with the following quote:

“There is no subtler, no surer means of overturning the existing basis of society than to debauch the currency. The process engages all the hidden forces on the side of destruction and does it in a manner which not one man in a million is able to diagnose.”

The younger Keynes appeared to understand the consequences of inflation four years before the collapse of the German mark in November 1923. The older Keynes changed his mind and argued in favour of inflation’s powers of economic restoration. He became one of the clueless million in his earlier statement.

This article is for the millions, who like the older Keynes do not understand the consequences of what will hit them. It is for those who do not appreciate the hidden forces of economic destruction driven by the acceleration of monetary debasement, which, thanks to the developing slump, now seems set to be unleashed.

The true purpose behind monetary expansion

A government with an exclusive licence to print money will always use it as a source of finance. All hyperinflations have had their origin in spendthrift governments with fiat currencies to hand. There was a time when every credible economist knew this, but now and then someone comes up with a theory that encourages governments to abandon the constraints of sound money and for state-sponsored economists to revise their opinions.

The first modern exponent of fiat currency was Georg Knapp of the Chartalist school in Germany, who published his State Theory of Money in 1905. He encouraged Bismarck to believe he could finance the newly unified Germany’s growing status as a military power without raising taxes. The consequence was the Great War and the continuation of this monetary policy led to the mark’s final collapse in 1923.

Keynes, as an occasional economic advisor to the British government, took on Knapp’s mantle in a different way, promoting the government’s use of money to stimulate the economy early in the business cycle by running a budget deficit, initially funded by government debt in a sound money context. In other words, he promoted the concept of the government being flexible in its finances but balancing its books over the business, or trade cycle.

In seeking a solution to the Great Depression, Keynes himself showed that after all, he was in the ranks the million who did not fully understood inflation. The error in Keynes’s approach was to believe the cycle was a trade or business cycle, when in fact it was a cycle driven by the inflation of the bank credit that he sought to stimulate. The solution was not to stimulate the expansion of bank credit but to stop banks from expanding bank credit in the first place and for the government to balance the budget at all times. But by encouraging governments to inflate money or have bank credit inflated in its place, Keynes was effectively promoting a modified version of Knapp’s disastrous state theory of money.

The result was that the bastion of sound, gold-backed money was fatally breached. Between 1934, when the dollar devalued against gold, and 1971, when the Bretton Woods Agreement collapsed, US broad money (M3) expanded considerably more rapidly than its gold backing, going from 5 times to 55 times. The issuance of unbacked fiat money was used to fight wars, while banks expanded credit, primarily to finance business expansion domestically and abroad. The collapse of the Bretton Woods Agreement reflected the fact that the dollar was then barely gold-backed, having become almost totally fiat. By coming up with his own, limited state theory of money in 1936, Keynes along with his fellow inflationists had led the way to casting currencies adrift from their golden anchor.