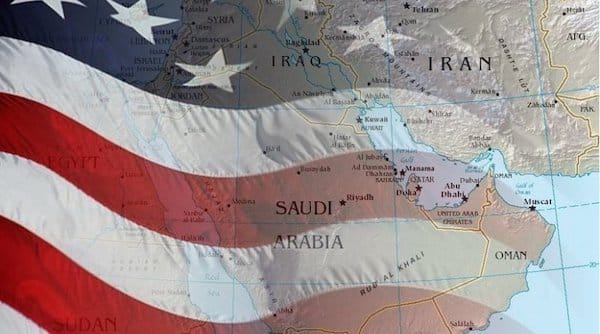 For many years, I’ve held the belief that, when World War III was brought on, it would most likely be in the Strait of Hormuz.

The strait is relatively narrow, with a shipping lane of just two miles. It’s bordered on the east by Iran and on the west by the United Arab Emirates. It’s also the main oil highway for Qatar, Bahrain, Kuwait, Iraq and Saudi Arabia. Since it’s the most critical point for oil distribution in the world and it’s shared by the oil industry’s equivalent of the Hatfields and McCoys, it’s the ideal location for an aggressive nation to start a “rumble.”

In May of this year, it was reported that mines in the strait had damaged four oil tankers. US National Security Advisor John Bolton quickly announced that “naval mines almost certainly from Iran” were to blame. He offered no evidence to back up this claim.

But Vice Admiral Michael Gilday reaffirmed the claim, saying “with a high degree of confidence that this [attack] stems back to the leadership of Iran at the highest levels.”

Although this was strenuously denied by Iran’s foreign ministry, Mr. Bolton reasserted, “There’s no doubt in anybody’s mind in Washington who’s responsible for this. Who else would you think is doing it? Someone from Nepal?”

And so, we have the US National security advisor and an admiral in the US Navy stating with near-certainty that Iran has launched an attack against the US, yet they offer no evidence, other than their own antagonism toward Iran.

None of the ships that were claimed to have been damaged were US-registered ships, but US representatives insisted that this was a direct attack by Iran against the US.

But the mild public furor over this “incident” died down rather quickly. Then, a month later, two more tankers (neither of which is US-registered) were claimed to have been damaged in the strait – this time, more seriously.

US Secretary of State Mike Pompeo was quick to state to the press, “Taken as a whole, these unprovoked attacks present a clear threat to international peace and security, a blatant assault on the freedom of navigation and an unacceptable campaign of escalating tension by Iran.” Ah, so this is now a trend.

He provided no evidence or specific details and took no questions from the press. Yet, the Associated Press backed Mr. Pompeo’s claim, stating, “The U.S. blamed Iran for suspected attacks on two oil tankers.”

Interesting… If we read this statement carefully, it’s uncertain as to whether attacks have occurred at all, yet Iran has been blamed in advance of any certainty, in case attacks might have occurred.

For its part, Iran also issued a statement – that it “categorically rejects” the US claim and condemns any attack that may have occurred. Iran stated further that it “stands ready to play an active and constructive role in ensuring the security of strategic maritime passages.” It warned of “U.S. coercion, intimidation and malign behavior” and expressed its concern “over suspicious incidents.”

Well, it appears someone’s fibbing here. We can’t be certain who, but whenever one nation accuses another of an attack but offers no evidence, no details and is unwilling to answer questions, the antennae should go up as to whether it’s a false-flag episode.

False-flag accusations have taken place in the US for quite a long time. In 1692, seventeen-year old Elizabeth Hubbard accused someone of being a witch, providing herself with instant celebrity in her hometown of Salem, Massachusetts. Once in the limelight, Elizabeth pointed out quite a few other witches. Hysteria broke out and over two hundred people were eventually accused, with nineteen being tried and executed.

When the people of Salem calmed down, they realized they’d been rather rash, and the Salem Witch Trials have remained an embarrassment for three hundred years.

On a happier note, in 2001, the Massachusetts legislature passed an act exonerating all who had been convicted. Nice to know that, some three hundred years later, the state, which had originally tried and convicted the witches, admitted, “Whoops – we goofed.”

But returning to false accusations at sea, in 1898, the US Navy sent the USS Maine to Havana Harbour, where an explosion occurred, sinking the cruiser. To this day there’s no certainty as to why the explosion occurred, but the US immediately blamed Cuba for an act of war. This provided the excuse for declaring war against Spain, allowing the US to invade Cuba and, inexplicably, the Philippines. Teddy Roosevelt declared that the invasion would “score the first great triumph of a mighty world movement.”

Sinking ships proved to be an effective way in which to get into a war. In 1915, the American people were reluctant to get involved in World War I, despite encouragement from President Woodrow Wilson.

So, hundreds of tons of munitions were loaded on board the ocean liner Lusitania, which was soon to sail for Britain. This information was then leaked to the Germans.

The German Embassy then warned that it would sink any such ships, even taking out adverts in New York newspapers advising prospective passengers not to sail, but the Lusitania sailed anyway and was sunk by German U-boats. Mr. Wilson then had his justification for a declaration of war.