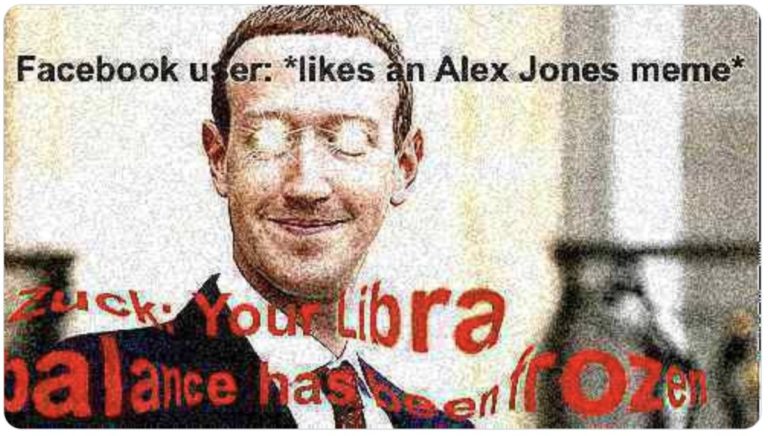 ZUCK: yea so if you ever need info about anyone at harvard
ZUCK: just ask
ZUCK: i have over 4000 emails, pictures, addresses, sns
FRIEND: what!? how’d you manage that one?
ZUCK: people just submitted it
ZUCK: i don’t know why
ZUCK: they “trust me”
ZUCK: dumb fucks

Years ago, Mark Zuckerberg made it clear that he doesn’t think Facebook is a business. “In a lot of ways, Facebook is more like a government than a traditional company,” said Mr. Zuckerberg. “We’re really setting policies.” He has acted consistently as a would-be sovereign power. For example, he is attempting to set up a Supreme Court-style independent tribunal to handle content moderation. And now he is setting up a global currency.

For a long time, I’ve maintained there’s no doubt the current system/paradigm we live under will collapse under its own weight, but that doesn’t keep me up at night. What keeps me up at night is understanding we still have no idea exactly what will replace it. It could very well be a more decentralized and free world, a world less defined by brute force, grotesque power concentrations and coercion, but it could also very easily go the other way. The coming out party for FacebookCoin (aka Libra) is in my view the first real indication the forces of corporate oligarchy are determined to ensure the new world reflects their vision and is under their control.

Though I’ve seen many thoughtful and important articles on the dangers of Facebook and a consortium of large corporations building a new financial system in broad daylight, I have yet to see anyone explain precisely what seems to be going on. I think the level of strategic long-term thinking happening here is more extensive than even the most cynical observer is willing to contemplate. This looks like a power play of monumental proportions.

I’ve come to view Mark Zuckerberg as a strategic genius with zero ethics. In other words, he probably has a plan beyond your field of vision and you can’t take anything he says at face value. This is how we’ve seen him operate within Facebook and via the various wildly successful acquisitions he’s completed over the years, most notably Instagram and WhatsApp.

You don’t have to be Nostradamus to see that the current global financial system is failing and won’t be around as currently structured much longer (years not decades). Nowhere is this more apparent than in the fact that negative yielding global bonds just pushed back into record territory at $12.5 trillion.

If I can see where this is headed, Zuckerberg and his top team at Facebook can see it too. As such, I view FacebookCoin as the corporate oligarchy’s first serious attempt to position itself to be chieftains of a key segment of what will be the financial system(s) of the future.

This is exactly why I think the fiat “backing” is a Trojan horse. He’ll drop the backing as soon as it’s convenient and attempt to make FacebookCoin the global currency of surveillance capitalism, “backed” by all of your private information. https://t.co/tZ2CqYiEVA

I do not think Zuckerberg’s ultimate goal is running a stable coin, although he could live with that arrangement and benefit from it for as long as necessary. I think the main reason Facebook has structured the coin with fiat backing is to make it seem less threatening to the current monetary establishment and world governments. It’s a way of saying Facebook isn’t trying to compete with the current status quo, but rather make the status quo run more smoothly and efficiently. Then, once it has a foot in the door and gains traction amongst its massive user base, all Facebook has to do is wait until the current assortment of global governments and their respective central banks fail.

At that stage it can remove the fiat currency backing (who will want it anyway), and let FacebookCoin free float. With the credibility of global governments and central banks in the toilet by then, Facebook and its corporate oligarch partners will be in a prime position to take over a sizable chunk of worldwide payments using their own currency. In other words, this appears to be a long-term scheme by elements of corporate oligarchy to position themselves as an unelected and unaccountable future sovereign power.

All that said, I want to be clear about something. Just because the above represents a plausible scenario doesn’t mean it’ll work out that way. If enough people recognize the dangers of this scheme, it could very well be stopped in its tracks.

In this regard, I want to highlight one of the biggest threats posed by a financial system run by a corporate oligarchy. For one thing, there’s the ever-present issue of censorship. I understand why many in the “crypto” world are fine with FacebookCoin since they see it as a threat to state power and control, but this is myopic in my view. Let’s not forget who is silencing the voices of Americans online in 2019. It’s not the state, but rather Facebook, Google, Twitter, etc. If we allow these companies to gain control of payments, you can be sure the same sort of unaccountable blacklisting will follow in the world of transactions.