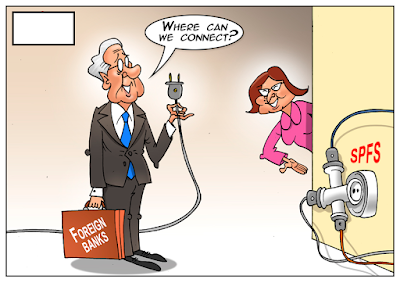 Tariffs and economic sanctions… these are the primary weapons that America has left in their arsenal as their influence over other foreign powers declines.  But unlike the consensus that Europe and the West willingly provided Washington over the past several decades, even this is beginning to erode as new controllers over global finance begin to rise.

In fact this new paradigm shift has not emerged from a single country, but from a partnership of equals that have the resources and military might to not only take on the U.S. and dollar hegemony, but to quite possibly even usurp it.

Banks based in several states are planning to participate in the Russian-developed money transfer network that serves as an alternative to the traditional SWIFT system, according to the head of the Central Bank of Russia (CBR). “It is open for external connection, we are developing it for our trade partners if they want to join. This work is already ongoing and banks of several countries are going to join, test connections already exist,” Elvira Nabiullina said at the first EU-Russia Student Conference in Moscow on Saturday. “We think it will be developing.” Moscow started working on its own payment service, which is dubbed the SPFS (System for Transfer of Financial Messages), amid threats that it could be disconnected from the internationally recognized SWIFT (Society for Worldwide Interbank Financial Telecommunication) system back in 2014. – Russia Today

Approximately 100 years ago, President Calvin Coolidge stated that the business of America is business.  But in the 21st century that slogan appears to have been passed onto two other regions of the world, where it is quickly being picked up by the growing financial centers of Moscow and Beijing.