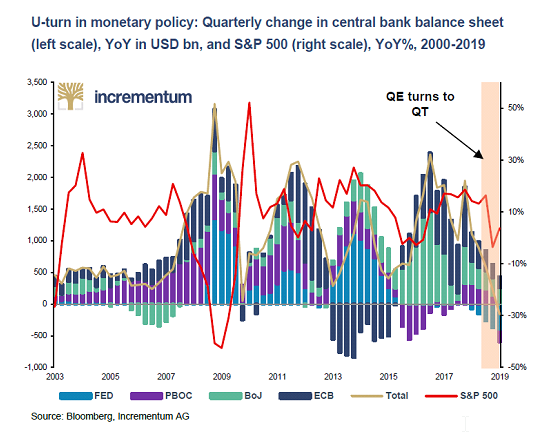 We Bring You This Critical Alert, Contributed By WealthResearchGroup.com and Their Founder, Lior Gantz, Who Our Staff Looks At For Accurate Economic Forecasting.

In 2010, one of the best-performing asset managers in history, billionaire and Carolina Panthers owner, David Tepper, was quoted in what became one of the best lines of this bull market. He essentially said that if the FED does QE 1, 2, and 3 while buying bonds and is willing to see some inflation in the process, he certainly wouldn’t be fighting them and would go LONG.

As an investor, his bottom line was that you don’t fight the FED or the central banks if you want to make money. Like me, he is a practitioner, so he deals with reality first and with idealism later.

He doesn’t mind criticizing FED policy, but he won’t abstain from making a fortune because of those policies, even if he doesn’t agree with them.

We don’t have a say in what the FED does and we have very little control over what Washington does as well. We do, however, have 100% control over our own actions. My point is that there’s no nobility in fighting the system as a poor person when you can do it as a wealthy individual. I will go to my grave believing that being wealthy is the best way to live on this planet, when your income is generated by elevating others, over-delivering for your clients, and making the economy more efficient and productive.

CREDIT CONTRACTION: THIS IS UNHEARD OF!

For the 1st time this century, we’re entering a global credit contraction. I’ll repeat that because it’s as important as realizing that someone is about to suffocate you: central banks are about to CHOKE everyone of liquidity.
Check this out:

In the 3rd quarter of 2019, global credit will begin contracting. As you can see going back to 2003, we’ve never had a global decrease in available cash – this is a game-changer.

I’ll never lend money to Washington, but my bet on gold prices and on cryptocurrencies over the years has resulted in insanely high gains.