China’s share surges to 54% in April. US in fourth Place, Canada an Also-Ran. 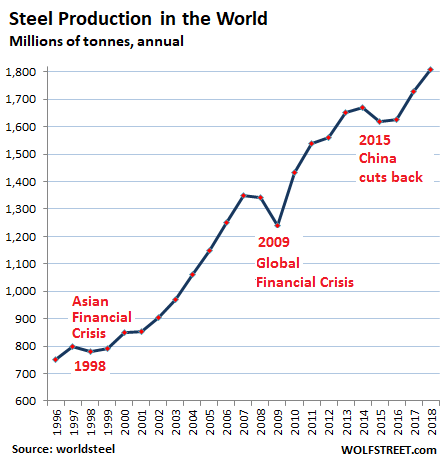 China v. the rest of the world:

In the first four months of 2019, China’s crude steel production jumped 10.3% year-over-year to 315 million metric tonnes, bringing its share to 52.5% of global production.

For April alone, China’s production soared 12.8% year-over-year to 85 Mt, and its share of global production reached 54.2%. That’s the new record.

The US, by comparison, the fourth largest crude steel producer, maintained its minuscule 4.7% share of global production over the 12-month period.

Vietnam, which in April moved up to 15th place, from 17th place for the year 2018, booked a huge jump of 42% in crude steel production in the first four months this year compared to 2018. For now, it’s still only a small producer with a share of less than 1% of global production.

In the rest of the world without China, production over the first four months in 2019 declined by 0.6% year-over-year.

The chart shows the monthly production of China (red) and the rest of the world (black), including the US in 2018 and 2019; in addition as a memo entry, just to see where we are, I added US production (green): 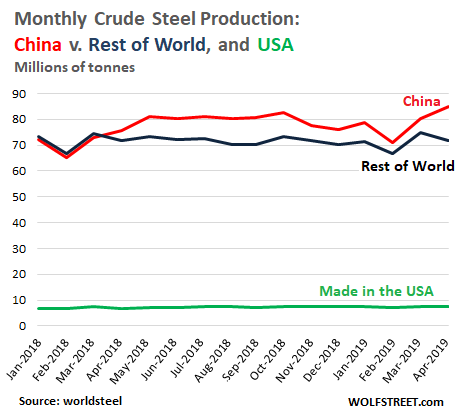 China’s steel production began surging out of near-nowhere in the late 1990s to end up outproducing the entire rest of the world, according to the data by the World Steel Association (worldsteel): 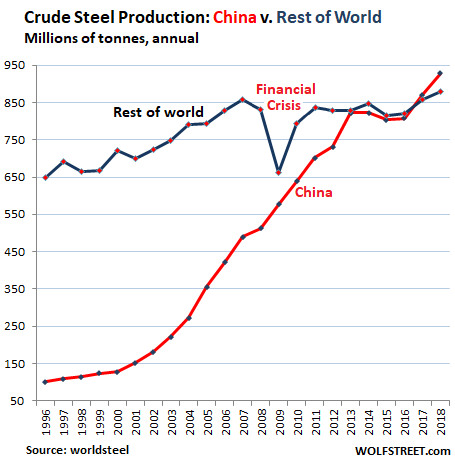 China’s mostly state-owned steel giants just kept on producing during the Financial Crisis, whether there was demand or not, causing prices to dive. Its market share jumped from 38% in 2008 to 47% in 2009. And its share has continued to grow. The chart below shows the global share of production in China and in North American (US, Canada, and Mexico): 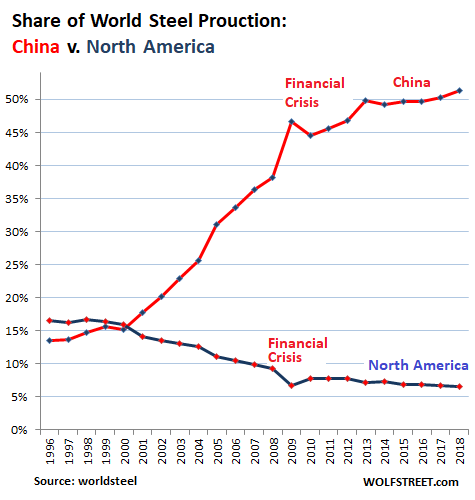 The largest crude steel producers in the world.

No country comes even close to China’s crude steel production. For example, its production is 11 times the amount produced in the US. But second and third place are just a hair apart. In 2017 India was in third place. In 2018, it moved into second place with 106.5 Mt., having outproduced Japan (104.3 Mt). The US is in fourth place (86.6 Mt). Canada is in 18th place: