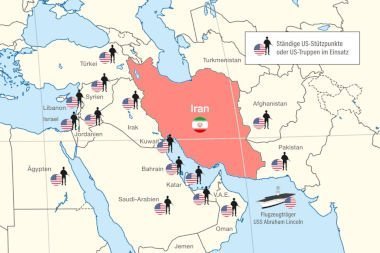 For the second time since the United States unilaterally withdrew from the so-called Iran Nuclear Deal, Western reports of “suspected attacks” on oil tankers near the Strait of Hormuz have attempted to implicate Iran.

The London Guardian in an article titled, “Two oil tankers struck in suspected attacks in Gulf of Oman,” would claim:

Two oil tankers have been hit in suspected attacks in the Gulf of Oman and the crews evacuated, a month after a similar incident in which four tankers in the region were struck.

Gulf tensions have been close to boiling point for weeks as the US puts “maximum economic pressure” on Tehran in an attempt to force it to reopen talks about the 2015 nuclear deal, which the US pulled out of last year.

Iran has repeatedly said it has no knowledge of the incidents and did not instruct any surrogate forces to attack Gulf shipping, or Saudi oil installations.

The Guardian would admit that “investigations” into the previous alleged attacks in May carried out by the UAE found “sophisticated mines” were used, but fell short of implicating Iran as a culprit.

The article would note US National Security Advisor John Bolton would – without evidence – claim that Iran “was almost certainly involved.”

This news of “attacked” oil tankers near the Stait of Hormuz blamed by the US on Iran – comes all too conveniently on the heels of additional steps taken by Washington to pressure Iran’s economy and further undermine the Iranian government.

Coincidentally, one of ships “attacked” this week was carrying “Japan-related cargo,” the Guardian would report.

Also convenient was the US’ recent designation of Iran’s Islamic Revolutionary Guard Corps (IRGC) just ahead of this series of provocations attributed to Iran.

AP in a May 2019 article titled, “President Trump Warns Iran Over ‘Sabotaged’ Oil Tankers in Gulf,” would claim:

Four oil tankers anchored in the Mideast were damaged by what Gulf officials described as sabotage, though satellite images obtained by The Associated Press on Tuesday showed no major visible damage to the vessels.

Two ships allegedly were Saudi, one Emirati, and one Norwegian. The article also claimed:

A U.S. official in Washington, without offering any evidence, told the AP that an American military team’s initial assessment indicated Iran or Iranian allies used explosives to blow holes in the ships.

The U.S. already had warned ships that “Iran or its proxies” could be targeting maritime traffic in the region. America is deploying an aircraft carrier and B-52 bombers to the Persian Gulf to counter alleged, still-unspecified threats from Tehran.

This more recent incident will likely be further exploited by the US to continue building up its military forces in the region, applying pressure on Iran, and moving the entire globe closer toward war with Iran.

The US has already arrayed its forces across the Middle East to aid in ongoing proxy wars against Iran and its allies as well as prepare for conventional war with Tehran itself.

All of this amounts to a renewed push toward a more direct conflict between the United States and Iran after years of proxy war in Syria Washington-backed forces have decisively lost.

It is also a continuation of long-standing US foreign policy regarding Iran put into motion over a decade ago and carried out by each respective presidency since.

Continued sanctions and the elimination of waivers are part of Washington’s unilateral withdrawal from the Joint Comprehensive Plan of Action (JCPOA) or the “Iran Nuclear Deal.” The deal was signed in 2015 with the US withdrawing in 2018.

While the decision is portrayed as political differences between former US President Barack Obama and current US President Donald Trump – in reality – the plan’s proposal, signing, and then withdrawal from by the US was planned in detail as early as 2009 as a means of justifying long sought-after war with Iran.

In their 2009 paper, “Which Path to Persia?: Options for a New American Strategy Toward Iran” (PDF), the corporate-financier funded Brookings Institution would first admit the complications of US-led military aggression against Iran (emphasis added):

…any military operation against Iran will likely be very unpopular around the world and require the proper international context—both to ensure the logistical support the operation would require and to minimize the blowback from it.

The paper then lays out how the US could appear to the world as a peacemaker and depict Iran’s betrayal of a “very good deal” as the pretext for an otherwise reluctant US military response (emphasis added):

The best way to minimize international opprobrium and maximize support (however, grudging or covert) is to strike only when there is a widespread conviction that the Iranians were given but then rejected a superb offer—one so good that only a regime determined to acquire nuclear weapons and acquire them for the wrong reasons would turn it down. Under those circumstances, the United States (or Israel) could portray its operations as taken in sorrow, not anger, and at least some in the international community would conclude that the Iranians “brought it on themselves” by refusing a very good deal.

And from 2009 onward, this is precisely what the United States set out to achieve.

First with President Obama’s signing of the 2015 Iran Nuclear Deal, up to and including President Trump’s attempts to backtrack from it based on fabricated claims Iran failed to honor the agreement.

With provocation, the international diplomatic and domestic political requirements of an invasion [of Iran] would be mitigated, and the more outrageous the Iranian provocation (and the less that the United States is seen to be goading Iran), the more these challenges would be diminished. In the absence of a sufficiently horrific provocation, meeting these requirements would be daunting.

Unmentioned directly, but also an obvious method for achieving Washington’s goal of provoking war with Iran would be the US simply staging an “Iranian provocation” itself.

As the US had done in Vietnam following the Gulf of Tonkin incident, or US fabrications regardings “weapons of mass destruction” Washington claimed Iraq held in its possession, the US has a clear track record of not just simply provoking provocations, but staging them itself.
The Brookings paper even admits to the unlikelihood of Iran falling into Washington’s trap, lamenting (emphasis added):

…it is certainly the case that if Washington sought such a provocation, it could take actions that might make it more likely that Tehran would do so (although being too obvious about this could nullify the provocation). However, since it would be up to Iran to make the provocative move, which Iran has been wary of doing most times in the past, the United States would never know for sure when it would get the requisite Iranian provocation. In fact, it might never come at all.

The alleged sabotaging of oil tankers off the shore of the UAE in May and now additional “attacks” this month could be the beginning of a series of staged provocations aimed at leveraging the recent listing of the IRGC as a “terrorist organization” coupled with increased economic pressure as a result of US sanctions re-initiated after the US’ own withdrawal from the Iran Deal.