China has decided that Ambassador Lu can be more productive if re-deployed to France where greater opportunities for BRI-cooperation can be found.

As the international financial system is becoming increasingly shaped by the spirit of cooperation and long term development shaped by China’s Belt and Road Initiative and the greater Russia-China alliance, Canada’s adherence to the “old liberal order” has caused the Asian giant to make a tough decision: Remove its Ambassador Extraordinary Plenipotentiary Lu Shaye from the Northern Monarchy until saner heads become a factor in Canadian politics.

This has left the already beleaguered government of Justin Trudeau (and Chrystia Freeland… let’s not kid ourselves here) in an embarrassing situation as Trudeau’s requests to meet with Xi Jinping at the upcoming G20 have gone ignored for the past several days. Freeland has announced that her many requests to speak with China’s Foreign Minister have similarly gone unheeded.

Since attaining power in 2015, the Liberal Government has demonstrated nothing but constant belligerence to China. Many then watching the Canadian political scene had hoped that Trudeau would continue the pro-China traditions which his father initiated in 1970 and which paved the way to China’s opening up under the leadership of Deng Xiaoping a few years later.

This did not occur.

Rather than adapt to the shifting current of the times which calls for nations to reject “each against all” geopolitics and instead join a new win-win framework driven by the Belt and Road Initiative model of development, Canada has only dug its heels ever deeper into the ground in defense of the sinking Titanic of Globalization. This was seen by Canada’s unrelenting support for the COP21 depopulation agenda, the anti-China Trans Pacific Partnership, the anti-Russia/China NATO missile shield, and anti-everybody WTO system.

Once the Chinese government made their disapproval of Canada’s behavior known with the December 2017 rejection of the Canada-China special relationship, Trudeau and Freeland were assigned to take on a more aggressive tone against China, first by blocking the sale of Canada’s Aecon to China due to “security risks” in May 2018, arresting Huawei’s Meng Wanzhou in December 2018, firing a pro-Chinese ambassador in January 2019 and mobilizing international support against China’s human rights abuses due to China’s arrest of two Canadians on espionage charges and the death penalty given to a Canadian drug smuggler.

How a low level “middle power” like Canada ever gained the hubris to believe that it could intimidate a country like China is a mystery, but it happened.

Now Xi Jinping has sent a clear message that it will no longer tolerate a mosquito who thinks it is a dragon trying to bully China any longer. China’s ambassador Lu Shaye has done everything for 3 years to offer Canada the opportunity to join the Belt and Road Initiative and open up to a new system of cooperation with China’s investment into decayed North American infrastructure. In a recent Ottawa event Ambassador Lu said:

“China and Canada could engage in third-party market cooperation, create a kind of synergy and achieve triple-win by combining the needs of developing countries, China’s production capacity, and Canada’s advantages in capital and technology. Canada is one of the members of the Asian Infrastructure Investment Bank (AIIB), which provides favourable conditions for the country to participate in the Belt and Road facility connection.” 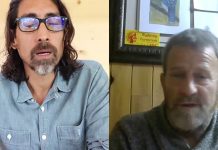