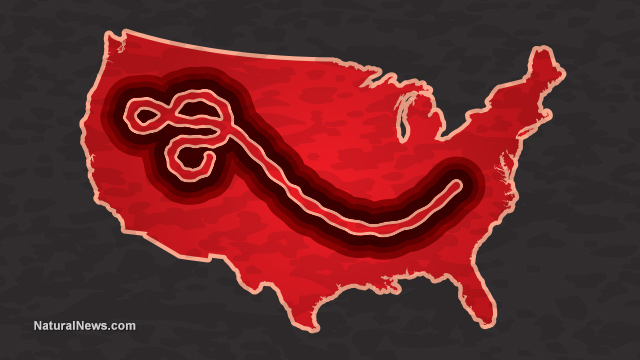 It is a medical fact that people of African descent have enhanced natural immunity to various viral infections, including Ebola. In fact, migrants from Africa may carry Ebola and show no symptoms whatsoever. This simple, irrefutable fact appears to be completely unknown to all U.S. doctors, journalists and CDC “experts” who claim Ebola can’t possibly be carried to the U.S. from Congo because, they often explain, nobody is showing any symptoms.

Yet it is a well-known medical fact that Ebola carriers from Africa may be entirely symptom-free. If you don’t believe me, go back to the June 27, 2000 article in the New York Times, authored by Lawrence K. Altman. The headline is, “People Carrying Ebola, in Some Cases, May Be Free of Symptoms.”

“The Ebola virus… can also infect without producing illness, according to a new finding by African and European scientists,” reported the NYT. “They found that the Ebola virus could persist in the blood of asymptomatic infected individuals for two weeks after they were first exposed to an infected individual. How much longer the virus can persist is unknown.” 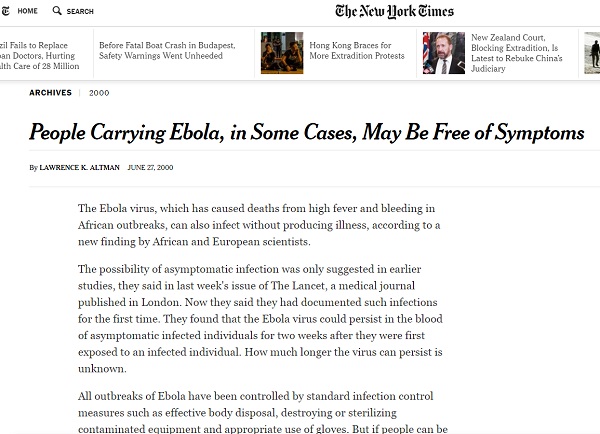 Citing a study published in The Lancet and authored by Dr. E. M. Leroy, the NYT continues:

Scientists have known that Ebola usually spreads from an infected person to another individual and through contamination in clinics or hospitals. The new finding suggests that some cases may result from healthy carriers. How often is unknown.

Dr. Leroy’s team said another public health concern was transmission of Ebola virus from healthy carriers through sex. Other scientists have detected Ebola in semen.

Yes, Ebola virus can live in human semen. This simple fact is completely denied by the entire fake news “establishment” media, even when the NYT openly admitted it in 2000. That’s the whole point of the indy media news censorship you’re seeing today across the ‘net; to silence real facts while pushing a fake news narrative that’s built on fictions rather than reality.

Fiction = “No one from the Republic of Congo could possibly be carrying Ebola, or they would be showing symptoms.”

FACT = Scientists documented symptom-free carriers of Ebola nearly twenty years ago, and the virus can be carried for years in blood and semen.

Also from the NYT:

Dr. Leroy’s team studied 25 individuals who never developed symptoms although they lived with family members and cared for them without using gloves and other precautions in two outbreaks in Gabon in 1996.

Using standard virologic techniques, the scientists from Gabon, Germany and France said they could not detect the virus in the blood of the healthy contacts. But Dr. Leroy’s succeeded by using a technique known as polymerase chain reaction to grow the tiny amount of virus present.

In other words, some people from the Congo are able to carry Ebola for life while showing no symptoms whatsoever. But the virus is present in their blood and can be replicated using standard PCR techniques. This means the virus might also be quite capable of infecting others.

Another study published in the Journal of Infectious Diseases in 2004, also by Dr. Leroy, documented the fact that chimpanzees can carry Ebola infections without suffering Ebola fatalities. “[C]himpanzees are continuously in contact with the virus; and nonlethal Ebola infection can occur in chimpanzees,” Dr. Leroy and co-authors write in the abstract of the study. (J Infect Dis. 2004 Dec 1;190(11):1895-9. Epub 2004 Nov 3.) 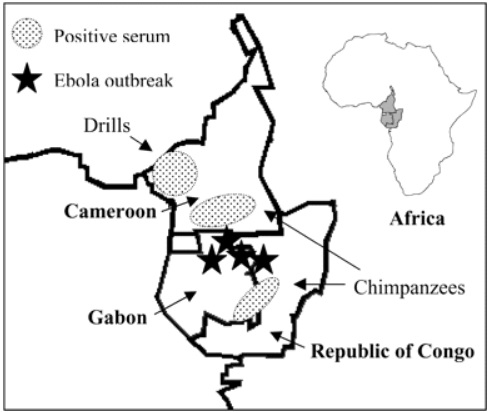 Republic of Congo migrants being dumped all across America

No media outlet has done more reporting on this alarming phenomenon than Infowars, which sent numerous reporters to San Antonio to interview doctors and city officials who were running the temporary shelters and distribution hubs. There, after intermingling in a shoddy indoor environment that would be perfect for spreading Ebola, migrants from the Congo were loaded onto buses and shipped off to other parts of the country.

Not even the San Antonio city officials knew where the migrants were headed.

See some of Infowars’ reporting here:

The World Health Organization (WHO) has decided not to declare an international health emergency over the Ebola epidemic in the Democratic Republic of Congo that has now spread to Uganda, the organization announced Friday.

WHO’s announcement comes only days after Infowars exclusively documented the hundreds of unvetted Congolese migrants being bused into San Antonio, Texas, which the mainstream media still refuses to cover.

HUNDREDS OF ILLEGALS FROM EBOLA-RIDDEN CONGO DUMPED IN TEXAS, 350 MORE ON THE WAY

Shock video: Watch illegals from Africa fleeing Ebola-stricken Congo who made it across the Rio Grande river a week ago arrive at a city-owned shelter in San Antonio and then being distributed by bus and van to undisclosed locations across The United States.

Hundreds of illegal aliens from the Democratic Republic of Congo in Africa, which is currently experiencing a massive Ebola virus outbreak, have been dropped off in San Antonio, Texas and hundreds more will arrive in the near future.

After being placed in San Antonio, the illegal immigrants are bussed to a destination of their choice by local charities who spend “roughly $14,000 a week on bus tickets.”

Infowars reporter Owen Shroyer physically visited the facility in San Antonio and interviewed a doctor / city official there who falsely claimed that the risk of Ebola in the migrants was “zero.” Her logic? She said Ebola always had a 21-day incubation period, and since these migrants had been “walking across Mexico” for more than 21 days, they could not possibly be infected.

John Brennan: Biden “Nominees and Appointees Are Moving in Laser-Like Fashion” To Target and “Root-Out” Political Opposition, Including Libertarians