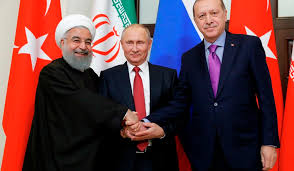 Recent reports suggest that Trump’s National Security Advisor John Bolton, together with Secretary of State Mike Pompeo, are “doing everything possible to instigate a war with Iran”. Will they succeed?

Bolton-Pompeo are involved in deliberate acts of provocation. The Abraham Lincoln carrier strike group is currently en route to the Persian Gulf  “to send a clear and unmistakable message to the Iranian regime…”

This is not the first time that threats of this nature have been formulated. War on Iran has been on the drawing board of the Pentagon for the past 16 years.  Following the 2003 invasion of Iraq, U.S. military sources intimated at the time that an aerial attack on Iran could involve a large scale deployment comparable to the U.S. “shock and awe” bombing raids on Iraq in March 2003.

Without dispelling the dangers of the reckless Bolton-Pompeo initiative, a large scale US-NATO-Israel military operation directed against Iran from a strategic and geopolitical standpoint at this juncture is unlikely.

A shift in military alliances between “Great Powers” is unfolding, which is exceedingly more complex than that  pertaining to World War I. (i.e  the confrontation between “The Triple Entente” and “the Triple Alliance”).

Today, the structure of military alliances is in jeopardy much to the detriment of Washington.

You cannot successfully wage war on Iran when Turkey, your ally and NATO heavy weight is “sleeping with the enemy”.

While Turkey is officially a member of NATO as well as a firm ally of the US, president Recep Tayyip Erdoğan has been developing “friendly relations” with two of America’s arch-enemies, namely Iran and Russia.

Needless to say NATO is in crisis. Moreover, US and Turkey supported proxy forces are fighting one another in Northern Syria.

There is also a Turkey-Israel military-intelligence alliance which dates back to the Security and Secrecy Agreement (SSA) signed with the government Tansu Çiller in 1993-94. This alliance which had been designed by the Clinton administration is no longer functional.

This US sponsored triangular structure of alliances is dead and defunct, much to the detriment of Washington’s interests in the Middle East.

What is now unfolding is a new Triple Entente between Turkey, Iran and Russia

But there is another element which is absolutely crucial: Israel is also sleeping with the enemy. Netanyahu and Putin have developed over the years an informal and friendly relationship. They consult one another frequently on key political and strategic issues.

While the Netanyahu-Putin relationship is not a formal alliance, it nonetheless serves the interests of both Russia and Israel. “Putin has a friend in Bibi Netanyahu, and maybe even a soulmate”. According to Reuters, “Vladimir Putin is the closest thing to a friend Israel has ever had in Moscow”.

Contemporary developments point to a historical shift in the structure of military alliances which is contributing to weakening US hegemony in the Middle East as well as creating an unspoken crisis within the North Atlantic Treaty Organization (NATO).

Waging US-NATO-Israel war on Iran with or without Turkey?

Turkey is NATO’s heavy weight, it is the only NATO member state which is (largely) situated in the Middle East bordering onto Iran.

Vice President Mike Pence warned Turkey against going ahead with the purchase of the Russian-made [S-400] missile system, hours after the Turkish foreign minister said the acquisition was “a done deal” … Pence said the weapons purchase could “threaten the very cohesion of this alliance... We’ve also made it clear that we’ll not stand idly by while NATO allies purchase weapons from our adversaries,“ Pence said. (CNN, April 3, 2019)

Mike Pence is right: The cohesion of NATO is at stake. And Turkey cannot be trusted as an ally of the US.

Turkey’s NATO-Exit? It is almost a done deal.

In the course of the month of April (following Pompeo’s diplomatic blunder in Ankara) Turkey and Iran have strengthened their bilateral relations.

Pompeo’s counterpart Foreign Minister Mevlut Cavusoglu has retorted: “We do not accept unilateral sanctions and impositions on how we build our relationship with our neighbors.” (quoted in Al Monitor, April 29, 2019)

US, NATO, Israel Military logistics are integrated, and Turkey is still (officially) part of NATO.

The evolving structure of military alliances (and cross-cutting coalitions) including the crisis within NATO does not favour the launching  of a large scale military operation against Iran. One assumes that Bolton-Pompeo are fully aware of this issue. Or are they?