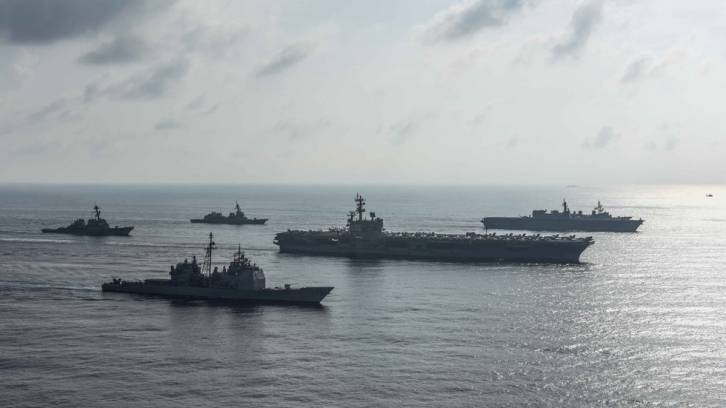 There are many indications that the United States and China are creeping towards a potential conflict in the South China Sea. When the motivations behind this war become clear the stakes become that much more serious.

While the world is drumming up a potential maritime showdown between the US and Iran (yet again), Western media is conveniently ignoring a potential looming conflict in the South China Sea, one that has been building up for years.

Just last week, naval vessels from Japan, the US, India, and the Philippines sailed through the South China Sea in an almost week-long military drill aimed at containing China’s expanding influence in the region. As it happens, China’s renewed friendship with the Philippines under the rule of Rodrigo Duterte has been short-lived and is not exactly going as planned.

Duterte, who has signalled he wants to turn his country away from the US and work more closely with China, even disregarding an international arbitration ruling which ruled in favour of the Philippines, has had his work cut out for him. For example, he must reckon with two former Filipino officials who filed a complaint with the International Criminal Court (ICC) over China’s activities in the South China Sea. He also has to deal with what he feels is the to-ing and fro-ing between the US and China on a regular basis. Should the Philippines be forced to defend any of its claimed territories from China, Washington has signalled that it is committed to defending the Philippines against China due to a mutual defence treaty between the two nations.

And just last Monday, the Philippines high court instructed multiple agencies, including the Philippine Navy, police and the Coast Guard to protect reefs and marine life in Scarborough Shoal, Second Thomas Shoal and Mischief Reef. According to presidential spokesman Salvador Panelo, the government is now “duty bound” to enforce the court order.

Not to mention that a multilateral military drill, which saw the Philippines teaming up with India – China’s major competitor in the Indo-Pacific region – and Japan – China’s historic rival, should tell everyone all they need to know about where this is headed.

Furthermore, the US Navy’s operations chief, Admiral John Richardson, just went on the record to state that he would like to see Australian and Indonesian maritime forces have a greater naval presence in the South China Sea, encouraging the two nations to take part in what the US calls “freedom of navigation” operations.

So far, Australia has declined to take part in freedom of navigation operations in the South China Sea within 12 nautical miles of territories claimed by China, though it has certainly played its hand at rattling Beijing in the region as much as possible. Indonesia, on the other hand, opened a military base on  Natuna Besar Island, which is located at the southern edge of the South China Sea.

For what it’s worth – the US would do well not to count on Indonesia. When it isn’t subjugating West Papua, Jakarta appears to be more interested in fighting with China’s regional foes in the South China Sea rather than confronting China itself.

Beijing, for its part, is not taking these developments well. In a recent editorial piece, state-owned newspaper the Global Times made it clear that China had to continue to build its navy in order to deter Washington from waltzing freely into the South China sea.

“Only if the Chinese navy is sufficiently strong will US warships dare not wilfully enter China’s offshore waters to flex their muscles,” the newspaper wrote. “A strong Chinese navy is the guarantee for peace and stability of the South China Sea and even the whole world.”

As such, it does appear that China is making plans of its own should a conflict break out. Last month, China carried out a series of military exercises on the south and north ends of Taiwan. This is true even while the Taiwan Relations Act compels the US to defend Taiwan from Chinese military aggression, despite the fact Washington purportedly adheres to China’s “One China” policy.

Fully aware that Beijing will have to project its military power in the region in order to defend its interests, just this week, China unveiled two new naval destroyers, part of a fleet of 20, equipped with 256 missiles. One such missile has been referred to as China’s “deadliest anti-ship cruise missile (ASCM), the vertically-launched YJ-18 ASCM.”

While completely overlooked by the media, there might actually be a reason why the Trump administration has so heavilytargeted China’s steel production industry in its ill-advised trade war with Beijing. It transpires that the low cost of steel is one of the factors that has enabled China to press ahead with building these warships at a decently-rapid pace. Maybe this also explains why, when tariffs were first invoked under section 232 of the Trade Expansion Act of 1962, the rationale was that it was on the grounds of “national security.”

Forget Iran. It will become a major “national security” catastrophe for the US when a hardened and emboldened Chinese military and navy with hypersonic missiles has complete control of this geostrategic location. Trillions of dollars of trade pass through this region annually, representing about one-third of global shipping. According to the Council on Foreign Relations, the South China Sea has an estimated 11 billion barrels of untapped oil and 190 trillion cubic feet of natural gas.