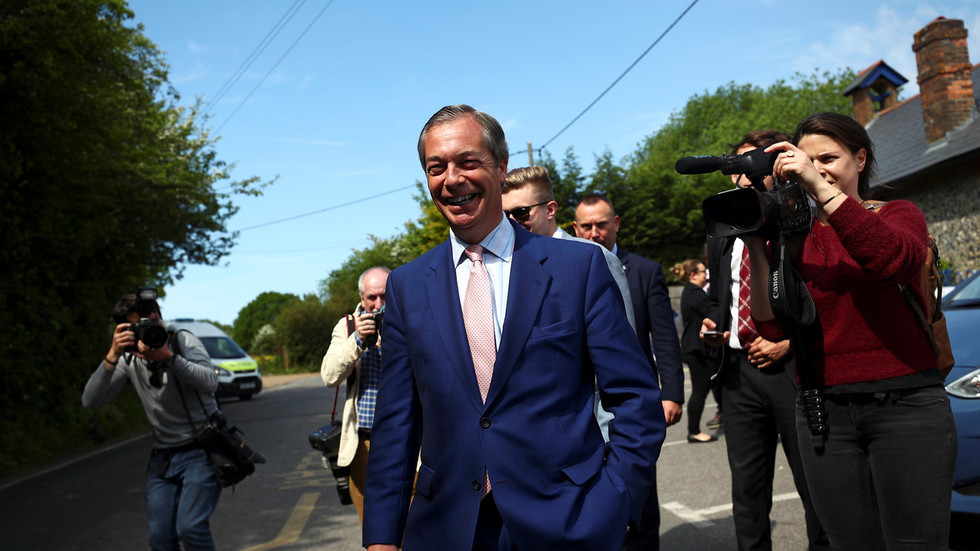 The euroskeptic Brexit Party headed by former UKIP leader Nigel Farage is looking at a solid victory in the European elections, early exit polls show, placing it at about 30 percent, over 20 percent ahead of the Conservatives.

The Brexit Party appears to have scored big in the UK’s portion of the European Parliament elections, with early results and projections on Sunday night showing it ahead of the rest of the field.

Farage began celebrating as the first exit polls started coming in. “It looks like it’s going to be a big win for the Brexit Party,”he told reporters.

With about 99 percent of the vote in, Brexit has some 31.6 percent, followed by pro-EU Liberal Democrats with 20.3, Labour with 14.1 and the Greens with 12.1. The Conservatives are taking a massive hit and are projected to win only 9.1 percent.

Farage has said that he eyes full-fledged involvement in the Brexit negotiations.

“We want to be part of that negotiating team,” he said. The long-term MEP added that in case the UK again misses the repeatedly extended deadline to leave the EU, which now stands at October 31, he will be looking forward to repeating the same strong showing at the British general elections and his party is “getting ready for it.”

The next general election is scheduled for May 5, 2022, but may be called earlier by two thirds of the House of Commons, or in case of a successful motion of no confidence.

The Brexit Party’s triumph is not coming out of the blue. Ahead of the vote, numerous polls predicted that Farage’s new political venture would pass its first election test with flying colors with an estimated double-digit lead over the Conservative Party, which is days away from losing their leader on June 7, when Theresa May’s resignation comes into force.

The three-day EU-wide elections has attracted the largest turnout in two decades, since 1994, when over 56 percent of the Europeans cast their ballots. In the UK, it has been overshadowed by a leadership struggle in the Conservative Party after Theresa May’s Friday announcement that she would step down as the party’s leader. The Tories saw their voter support sliding due to the Brexit deal debacle that precipitated the PM’s long-awaited bow-out.

Registered just three months before the election, on February 5th, the Brexit Party quickly gained momentum on the back of the growing frustration with May and the Tories’ failure to deliver the long-awaited split with the EU. While the Brexit Party is a novice in the European politics, it has 14 MEPs in the outgoing European Parliament, all defectors from the UK Independence Party (UKIP), including Farage himself. According to BBC projections, Farage’s new project will fare better than UKIP, his former one, which grabbed 24 seats and 27 percent of the popular vote in 2014.