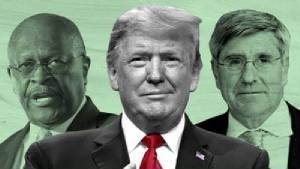 If you ever had doubts just who is squarely in charge of the finances for the debt created U.S. Dollar currency, the nixing of Herman Cain and Stephen Moore for the Federal Reserve Board confirms that the Banksters are the real power. The Shadow Government is truly the elitists behind monetary hegemony that rules over government and economic policies. The institutions that shape and direct the financial dynasty of the reserve currency is outside the realm of Presidential compliance. Donald Trump has just experienced the push back from the Jackals of Jekyll Island.

Clearly the Federal Reserve 100 Years of Failure has been the single most destructive financial factor in history. Over the last century the Merchantry economy has been systematically dismantled in favor of the Corporatocracy. The Wall Street establishment has always opposed entrepreneurs unless they go public with shares that the Masters of the Universe can manipulate. Both Cain and Moore have a long record of media appearances that often vary from the establishment viewpoint.

Kitco reports in the column, Trump Picks Gold Standard Advocate Herman Cain For Federal Reserve Board. In a 2012 op-ed piece for the Wall Street Journal, Cain laid out why he supports the return to the gold standard.

“However imperfect a gold standard may be, it remains the best among all alternatives. The empirical data for both the classic gold standard, which I favor — and even the flawed ‘gold-exchange’ standard, as we had under the Bretton Woods system — are impressive. Economic growth was stronger, unemployment rates lower, the price level more stable, and recessions less frequent and less severe than under the present system … A gold standard is to the moochers and looters in government what sunlight and garlic are to vampires,” Cain wrote.

“He would be a new voice at the Fed. Probably, at times, the Fed needs new voices,” said Shelby. “I’ve always said they could use diversity, you don’t need to be a Nobel laureate or University of Chicago professor.”

Seldom has the venom of the power elites sounded a unified condemnation for these two non conformists of the privately owned debt enslavement system. So when the elitists over at CNN argues in, Why politicizing the Federal Reserve could have dangerous consequences is rich in their internationalists agenda.

“The Fed is not a place to put your cronies,” former Federal Reserve governor Sarah Bloom Raskin told CNN Business.

Raskin, who was appointed by President Barack Obama and served on the Fed board from 2010 to 2014, said Trump’s attacks on the central bank and the selections of Moore and Cain “run the risk of politicizing the Fed.”

The message translated from newspeak into factual analysis avoids the business as usual standard that has always been a politicized Fed. The very nature of the central bank is to control the political process for the benefit of the banking globalists.

Obliviously, Trump is not in control of his own administration and certainly experienced bipartisan resistance to shake up the Federal Reserve. Imagine the fallout if Trump selected Ron Paul to revamp the entire monetary system with the issuance of a debt free created currency. Ron Paul vs. the Federal Reserveprovides the evidence why the Federal Reserve has defrauded the American public and the solution to replace our current money legal tender notes.

Reality has proven that the public placed little interest in a discussion on the Federal Reserve. For over a hundred years the details have been made available to ignite a powder keg of resentment that would make Guy Fawkes proud. However, financial enslavement just does not rise to the level of the fake news that continues to dominate the public consciousness.

The only way for the middle class to earn their way into independent affluence is to create and expand profitable business ventures. Banks are in a rush to purge small businesses from their account portfolio, much less make available loans so that private businesses can grow. The cost of capital is a major factor in any business plan. But when credit is not made obtainable with an asserted shift to funding only corporatists of an approved political position, business transactions cease for the merchant class.

So we are supposed to accept that Cain and/or Moore would ‘politicize the Fed’? The actual empirical record must take into account that the Federal Reserve is a Cache of Stolen Assets.

“Think about who really owns the land, the buildings and the resources in our country. In order to really understand the scope and extent of the economy, the differential between actual Main Street enterprise, that feeds, clothes and shelters the population, is minuscule when compared to the financial assets, both liquid and real property, that is under the command and control of the central bank.

Most individuals do not own property encumbrance free. Most debt is owed to the banksters. The middle class is in a tailspin because the Fed has a zero interest rate policy that effectively diminished your return on capital of your savings to nothing. The same is not true for the banks. The fact that they have in excess of a 2 Trillion Dollars cash hoard on their balance sheets and refuse to lend out money to the general public, demonstrates that the inside money is waiting to pick up even more real assets, when the signal comes for the total collapse.”