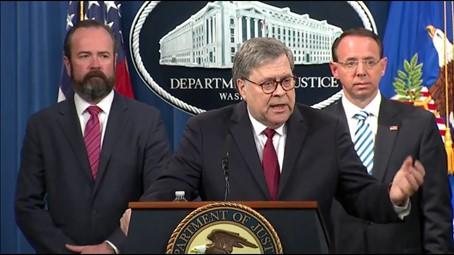 The Duran’s Alex Christoforou and Editor-in-Chief Alexander Mercouris discuss US President Trump’s decision to declassify Deep State documents including the “bucket 5” docs in the next seven to eight days.

Trump issued orders to the FBI and CIA to “fully cooperate” with Attorney General William Barr, granting the DOJ “full and complete authority to declassify” the documents that made up the entire Russiagate hoax.

President Trump on Thursday announced that he has directed the US intelligence community to “quickly and fully cooperate with the Attorney General’s investigation into surveillance activities during the 2016 Presidential election,” adding that Attorney General William Barr has been given “complete authority to declassify information pertaining to this investigation.

….during the 2016 Presidential election. The Attorney General has also been delegated full and complete authority to declassify information pertaining to this investigation, in accordance with the long-established standards for handling classified information….

In a third tweet, Trump added that “Today’s action will help ensure that all Americans learn the truth about the events that occurred.”

….Today’s action will help ensure that all Americans learn the truth about the events that occurred, and the actions that were taken, during the last Presidential election and will restore confidence in our public institutions.” @PressSec

The pending declassifications were announced on Tuesday night by The Hill‘s John Solomon and Fox News‘s Sean Hannity, whose inside sources told them of the wide swath of information about to hit.

Among the documents slated for release, according to their sources, will be the so-called “Bucket Five” – documents which were originally presented to the Gang of Eight in 2016, which included everything the FBI and DOJ used against Trump campaign aide Carter Page – including the FISA surveillance application and its underlying exculpatory intelligence documents which the FISA court may have never seen.