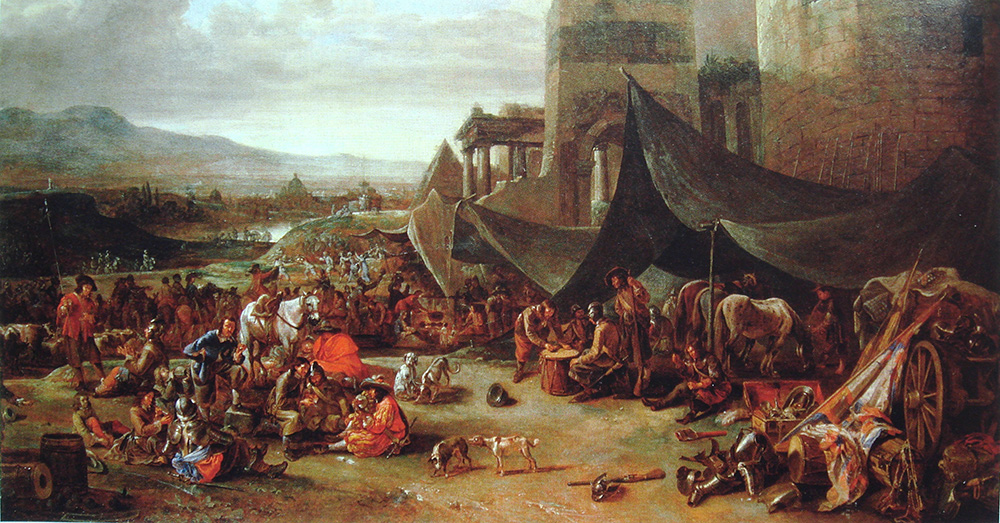 Like the Romans, we’re supposedly ruled by laws, not by men. In Rome, the law started with the 12 Tablets in 451 BCE, with few dictates and simple enough to be inscribed on bronze for all to see. A separate body of common law developed from trials, held sometimes in the Forum, sometimes in the Senate.

When the law was short and simple, the saying “Ignorantia juris non excusat” (ignorance of the law is no excuse) made sense. But as the government and its legislation became more ponderous, the saying became increasingly ridiculous. Eventually, under Diocletian, law became completely arbitrary, with everything done by the emperor’s decrees—we call them Executive Orders today.

I’ve mentioned Diocletian several times already. It’s true that his draconian measures held the Empire together, but it was a matter of destroying Rome in order to save it. As in the U.S., in Rome statute and common law gradually devolved into a maze of bureaucratic rules.

The trend accelerated under Constantine, the first Christian emperor, because Christianity is a top-down religion, reflecting a hierarchy where rulers were seen as licensed by God. The old Roman religion never tried to capture men’s minds this way. Before Christianity, violating the emperor’s laws wasn’t seen as also violating God’s laws.

The devolution is similar in the U.S. You’ll recall that only three crimes are mentioned in the U.S. Constitution—treason, counterfeiting, and piracy. Now you can read Harvey Silverglate’s book, Three Felonies a Day, which argues that the average modern-day American, mostly unwittingly, is running his own personal crime wave—because federal law has criminalized over 5,000 different acts.

Rome became more and more corrupt as time went on, as has the U.S. Tacitus (56-117 AD) understood why: “The more numerous the laws, the more corrupt the nation.”

Along with political and legal problems come social problems. The Roman government began offering useless mouths free bread, and later circuses, in the late Republic, after the three Punic Wars (264-146 BCE). Bread and circuses were mostly limited to the capital itself. They were extremely destructive, of course, but were provided strictly for a practical reason: to keep the mob under control.

And it was a big mob. At its peak, Rome had about a million inhabitants, and at least 30% were on the dole. It’s worth noting that the dole lasted over 500 years and became part of the fabric of Roman life—ending only when wheat shipments from Egypt and North Africa were cut off by the Vandals at the beginning of the 5th century.

In the U.S., there now are more recipients of state benefits than there are workers. Programs like Social Security, Medicare, Medicaid, food stamps, and numerous other welfare programs absorb over 50% of the U.S. budget, and they’re going to grow rapidly for a while longer, although I predict they’ll come to an end or be radically reformed within the next 20 years. I recognize that’s a daring prediction, given the longevity of the dole in Rome.

The Empire appears to have suffered a demographic collapse late in the 2nd century, during the reign of Marcus Aurelius, at least in part because of a plague that killed on the order of 10% of the population. Ancient plagues are poorly documented, perhaps because they were viewed as normal happenings. But there may be other, subtler reasons for the drop in population. Perhaps people weren’t just dying, they also weren’t reproducing, which is much more serious. The rising Christian religion was puritanical and encouraged celibacy. Especially among the Gnostic strains of early Christianity, celibacy was part of the formula for perfection and knowledge of God. But of course, if Christianity had been effective in encouraging celibacy, it would have died out.

The same thing is now happening throughout the developed world—especially in Europe and Japan, but also in the U.S. and China. After WW II, American women averaged 3.7 children. Now it’s 1.8; in parts of Europe, it’s 1.3. Part of that is due to urbanization and part to an understanding of birth control, but a growing part is that they just can’t afford it; it’s very expensive to have a kid today. And I believe another major element is a new religious movement, Greenism, which is analogous to early Christianity in many ways. It’s now considered antisocial to reproduce, since having kids raises your carbon footprint.

The essential anti-rationality of early Christianity poisoned the intellectual atmosphere of the classical world. This is true of not just religions in general, but the desert religions of Judaism, Christianity, and Islam in particular—each more extreme than its predecessor.

In late antiquity, there was a battle between the faith of the Fathers of the Church and the reason of the philosophers. Christianity halted the progress of reason, which had been growing in the Greco-Roman world since the days of the Ionian rationalists Anaximander, Pythagoras, Heraclitus, and others, right up to Aristotle, Archimedes, and Pliny. Knowledge of how the world worked was compounding, albeit slowly—then came to a stop with the triumph of superstition in the 4th century. And went into reverse during the Dark Ages, starting in the 6th century.

Christianity used to hold that anything that seems at odds with revealed truth or even with the extrapolations of revealed truth is anathema, the way much of Islam does today. The church drew generations of men away from intellectual and scientific pursuits and toward otherworldly pursuits—which didn’t help the Roman cause. It can be argued that, if not for Christianity, the ancient world might have made a leap to an industrial revolution. It’s impossible to make scientific progress if the reigning meme holds that if it’s not the word of a god, it’s not worth knowing.

For nearly 1,000 years, revealed beliefs displaced science and reason. This started to change only in the 13th century with Thomas Aquinas, an anomaly in that he cleverly integrated the rational thinking of the ancient philosophers—Aristotle in particular—into Catholicism. Aquinas was lucky he wasn’t condemned as a heretic instead of being turned into a saint. His thought had some unintended consequences, however, which led to the Renaissance, the Industrial Revolution, and today’s world. At least until Aquinas, Christianity slowed the ascent of man and the rise of rationalism and science by centuries, in addition to its complicity in the fall of Rome.