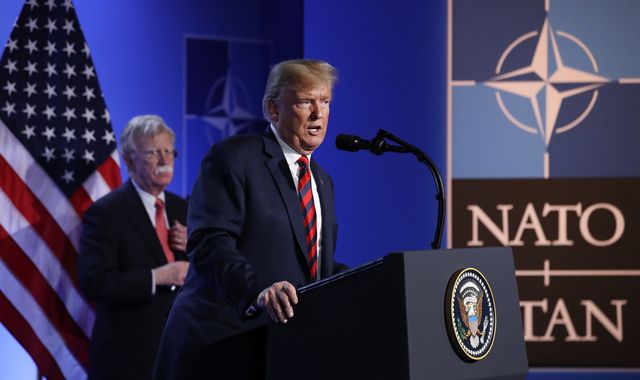 (CNSNews.com) – Ahead of President Trump’s first state visit to the United Kingdom, National Security Advisor John Bolton said Thursday the president looks forward to negotiating a trade agreement with “a fully independent Britain.” He also raised the possibility of a three-day deal with Canada.

“He’s been a strong supporter of Brexit and I think he really does look forward to the opportunity to negotiate with a fully independent Britain, outside the European Union,” Bolton told Sky News in London.

Bolton said the state visit will “underline the strength of the bilateral relationship.”

“I think it will make it very clear that the interests and values of the United Kingdom and the United States are very, very close, regardless of political currents in either country.”

Bolton said a bilateral trade deal would be good for both countries, adding, “I could imagine bringing Canada into a three-way deal in the near future.”

With Prime Minister Theresa May stepping down next week after failing to get parliamentary support for her European Union withdrawal plans, a Conservative Party leadership contest is underway to succeed her. Bolton would not be drawn when asked his views on the race.

“At this stage it’s obviously a delicate moment in the leadership selection process, and I’ll leave it at that,” he said.

There are now a dozen Conservatives vying for the job, with former Foreign Secretary Boris Johnson, current Environment Secretary Michael Gove, and former Brexit Secretary Dominic Raab in the lead, according to bookmakers’ odds.

Trump on Thursday described both Johnson and fellow euroskeptic Nigel Farage as “friends,” indicating that he “may” meet with them during the upcoming visit.

Hailing that striking result, Farage has warned that his party could become the biggest in Britain itself, should the country not leave the E.U. by the fall.

Citing Farage’s “big victory,” Trump said he and Johnson were “big powers over there.”

But asked whether he would throw his support behind them, he said, “they’re friends of mine but I haven’t thought about supporting them. Maybe it’s not my business to support people, but I have a lot of respect for both of those men.”