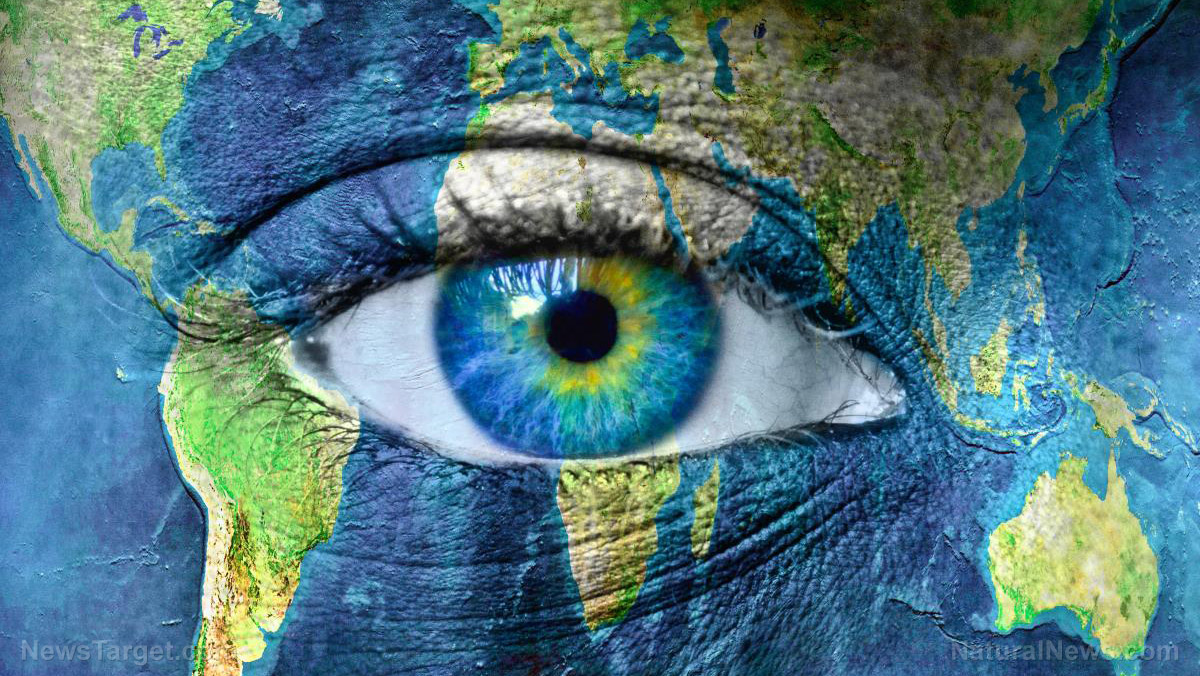 Everything you’ve been told about global warming, climate change and carbon dioxide by the mainstream media — and mainstream “science” — is an outright lie. Far from being a dangerous poison, carbon dioxide is a miraculous life-giving nutrient that plants need to thrive. Rising carbon dioxide is actually helping “green” the planet, as any legitimate science already knows. Without CO2 in the atmosphere, nearly all life on the planet would collapse, including both human life and plant life. (See my numerous science videos, below, which explain all this in detail.)

Now, an eye-opening interview has emerged that features István Markó, an organic chemistry researcher and professor at the Université catholique de Louvain. He was recently interviewed by Grégoire Canlorbe, a science journalist and out-of-the-box thinker. I’m publishing parts of the interview below, and I encourage you to read the full interview at GregoireCanlorbe.com.

All the words below are from István Markó, except the subhead titles, which are mine:

The truth about carbon dioxide

Again, CO2 is not, and has never been, a poison. Each of our exhalations, each of our breaths, emits an astronomical quantity of CO2 proportionate to that in the atmosphere (some >40,000 ppm); and it is very clear that the air we expire does not kill anyone standing in front of us. What must be understood, besides, is that CO2 is the elementary food of plants. Without CO2 there would be no plants, and without plants there would be no oxygen and therefore no humans. The equation is as simple as that.

Plants need CO2, water, and daylight. These are the mechanisms of photosynthesis, to generate the sugars that will provide them with staple food and building blocks. That fundamental fact of botany is one of the primary reasons why anyone who is sincerely committed to the preservation of the “natural world” should abstain from demonizing CO2. Over the last 30 years, there has been a gradual increase in the CO2 level. But what is also observed is that despite deforestation, the planet’s vegetation has grown by about 20%. This expansion of vegetation on the planet, nature lovers largely owe it to the increase in the concentration of CO2 in the atmosphere.

If we study, however, what has been happening at the geological level for several million years, we realize that the present period is characterized by an extraordinarily low CO2 level. During the Jurassic, Triassic, and so on, the CO2 level rose to values sometimes of the order of 7000, 8000, 9000 ppm, which considerably exceeds the paltry 400 ppm that we have today. Not only did life exist, in those far-off times when CO2 was so present in large concentration in the atmosphere, but plants such as ferns commonly attained heights of 25 meters. Reciprocally, far from benefiting the current vegetation, the reduction of the presence of CO2 in the atmosphere would be likely to compromise the health, and even the survival, of numerous plants. To fall below the threshold of 280 or 240 ppm would plainly lead to the extinction of a large variety of our vegetal species.

In addition, our relentless crusade to reduce CO2 could be more harmful to nature as plants are not the only organisms to base their nutrition on CO2. Phytoplankton species also feed on CO2, using carbon from CO2 as a building unit and releasing oxygen. By the way, it is worth remembering that ~70% of the oxygen present today in the atmosphere comes from phytoplankton, not trees: contrary to common belief, it is not the forests, but the oceans, that constitute the “lungs” of the earth.

The truth about the “greenhouse effect”

About the supposed link between global warming and CO2 emissions, it is simply not true that CO2 has a major greenhouse effect. It is worth remembering, here too, that CO2 is a minor gas. Today it represents only 0.04% of the composition of the air; and its greenhouse effect is attributed the value of 1. The major greenhouse gas in the atmosphere is water vaporwhich is ten times more potent than CO2 in its greenhouse effect. Water vapor is present in a proportion of 2% in the atmosphere. Those facts are, in principle, taught at school and at university, but one still manages to incriminate CO2 alongside this learning, in using a dirty trick that presents the warming effect of CO2 as minor but exacerbated, through feedback loops, by the other greenhouse effects.

I believe in science: I mean that I believe in the possibility of objectively knowing reality through science. I believe that there are truth and falsehood, that science allows us to distinguish between the two, and that truth must be known; that scientific knowledge must be placed in the hands of the population. I also believe in freedom. I believe that every man is entitled to lead his life and to manage his goods as he sees fit, that he is the only possessor of himself, and that statist socio-economic control is as morally reprehensible as it is harmful in its social, economic, and environmental consequences.

I note two things distressing me: firstly, the population is increasingly misinformed scientifically; and secondly, the media and governments take advantage of this to propagate a theory that is doubtful, namely that of anthropogenic warming, and to promote coercive measures on its behalf. Few people take the time to get vital information about the actual CO2footprint; and few people, more generally, are still interested in science. I deeply regret that our Western societies have succeeded in cultivating such mistrust of science: such a reluctance to have confidence in its capacity to know the world objectively and to transform it positively.

The theory of anthropogenic warming claims to be scientific; but if people accept this theory, if they hold it to be true, it is clearly not out of interest for science. Such a fragile theory, in view of the CO2 facts I have presented to you above, could never have been accepted by people who truly care about science; and who possess a deep understanding in that field. In my eyes, there are two main reasons—or if you prefer, two main types of feelings—that make people let themselves be seduced by the theory of anthropogenic warming so readily. In the first place, the Catholic religion is in decline in the Western world; and what I call ecologism comes to replace it.

In the second place, Westerners have a pronounced taste for self-flagellation; and the theory of anthropogenic warming provides justification for that tendency, possibly anchored in our Judeo-Christian heritage. So, on the one hand, we have religious feelings: faith in a new system of thought, which is ecologism; the veneration of a new divinity, which is benevolent and protective Nature. On the other hand, we have a feeling of guilt, expressed in our conviction that, if the climate warms up, it is our fault; and that if we do not immediately limit our CO2 emissions, we will have sullied and disfigured our planet.

Over the last 12,000 years, what we have witnessed is an oscillation between warm and cold periods, thus periods with rising and declining sea levels. Incontestably, sea and ocean levels have been on the rise since the end of the Little Ice Age that took place approximately from the beginning of the 14th century until the end of the 19th century. At the end of that period, global temperatures started to rise. That being said, the recorded rise is 0.8 degrees Celsius and is, therefore, nothing extraordinary. If the temperature goes up, ocean water obviously dilates and some glaciers recede. This is something glaciers have always done, and not a specificity of our time.

Thus, in Ancient Roman times, glaciers were much smaller than the ones we know nowadays. I invite the reader to look at the documents dating back to the days of Hannibal, who managed to cross the Alps with his elephants because he did not encounter ice on his way to Rome, (except during a snow storm just before arriving on the Italian plain). Today, you could no longer make Hannibal’s journey. He proved to be capable of such an exploit, precisely because it was warmer in Roman times.

Sea levels are currently on the rise; but this is an overestimated phenomenon. The recorded rise is 1.5 millimeters per year, namely 1.5 cm every ten years, and is, therefore, not dramatic at all. Indeed, it does happen that entire islands do get engulfed; but in 99% of the cases, that is due to a classic erosion phenomenon[2] and not to rising sea levels. As far as the Italian city of Venice is concerned, the fact it has been faced with water challenges is not due to any rise of the lagoon level; and is just the manifestation of the sad reality that “the City of the Doges” is sinking under its weight on the marshland. Once again, the global sea and ocean levels are rising; but the threat effectively represented by that phenomenon is far from being tangible. I note that the Tuvalu islands, whose engulfment was previously announced as imminent, not only have not been engulfed, but have seen their own land level rise with respect to that of waters around them.

Still another phenomenon we tend to exaggerate is the melting of the polar caps. The quantity of ice in the Arctic has not gone down for 10 years: one may well witness, from one year to the other, ice level fluctuations, but on average that level has remained constant. Right after the Little Ice Age, since the temperature went up, the Artic started to melt; but the ice level in the Arctic finally settled down. Besides, ice has been expanding in Antarctica over the last 30 years; and similarly, we observe in Greenland that the quantity of ice increased by 112 million cubic kilometers last year. On a global scale, glaciers account for peanuts, with most of the ice being located in Antarctica and on Greenland. One cannot but notice an almost unchanged ice level over hundreds of years.

…We are told that the level of water will increase throughout the world and increase to the point that it will overwhelm a large part of our continents. As Hans von Storch, one of the world’s leading climate modelers, has shown, the models supporting those forecasts are, for 98% of them, totally false. We are told that the air we breathe in the big cities has never been so polluted. One only must review the documents oneself about the air that people used to breath in London in the 1960s to realize how much urban pollution has diminished. In Peking, often castigated for poor air quality, there happens, every now and then, a fog reminiscent of the London smog. But even that pollution in Peking is far from competing with that which, a short while ago, reigned in London.

Many other climate myths and legends exist. From storms to tornados, extreme events are going down all around the world; and when they occur, their level is much lower, too. As explained by MIT physicist Richard Lindzen, the reduction of the temperature differential between the north hemisphere and the equatorial part of our planet makes cyclonic energy much smaller: the importance and frequency of extreme events thus tend to decrease. But once again, the rise of temperatures shows a magnitude considerably lower with respect to that we currently project.