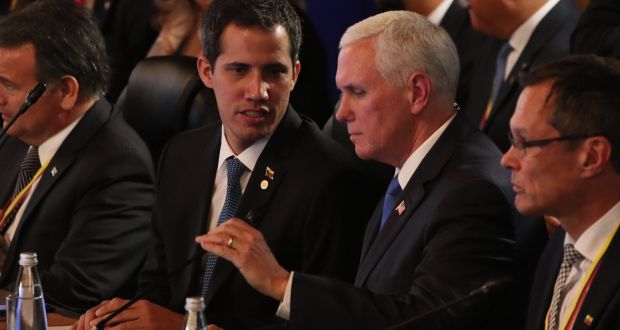 US Vice President Mike Pence told the UNSC that “the time has come” for the UN to recognize Guaido as Venezuela’s “legitimate president” and accept the latter’s representative to the world body. He added that the US would circulate a resolution to this effect, but offered no details on its timetable. A previous US resolution at the UNSC was vetoed by Russia and China on February 28.

Venezuela’s UN representative, Samuel Moncada, slammed what he called a “clear move to undermine” Venezuela’s rights, adding that his legitimacy depended on UN recognition and not on the declarations of the US vice president.

Russian ambassador Vassily Nebenzia accused the US of causing Venezuela “billions of dollars in losses” as a result of sanctions.

“[The US] deliberately provokes a crisis in Venezuela in order to change a legitimately elected leader for a US protege,” Nebenzia said in his speech.

Chinese representative Liu Jieyi likewise affirmed that Venezuelan affairs should be handled internally and criticized the imposition of sanctions, while his South African counterpart, Jerry Matjila, called for the UNSC to take a “constructive approach.”

Wednesday’s UNSC meeting came on the heels of a session at the Organization of American States (OAS) which approved Guaido’s appointment, Gustavo Tarre, as a representative to the body “until new elections are held.” The proposal had 18 votes in favor, 9 against, six abstentions and one absence.

Venezuelan authorities denounced the move as a violation of international law and of the OAS charter. The Foreign Ministry reiterated that Venezuela is due to leave the OAS on April 27, having started the process two years ago. Caracas denounced meddling in its internal affairs after the OAS had repeatedly tried to apply its democratic charter. However, it never managed to secure the necessary 24 votes.

Diplomatic battles surrounding Guaido’s recognition have extended to the International Monetary Fund (IMF). According to Bloomberg, the IMF cut off Caracas’ access to almost US $400 million in special drawing rights (SDR). While the IMF has shown no signs of recognizing Guaido, and lists Finance Minister Simon Zerpa as Venezuela’s representative, sources told Bloomberg that a government must be recognized by a majority of the Fund’s members to access its SDR reserves.

Venezuela remains mired in a deep economic crisis that has seen its international reserves shrink to around $9 billion. The cash crunch has been further compounded by US and allies freezing Venezuelan assets held abroad. In one such case, the Bank of England has refused to repatriate an estimated $1.2 billion worth of Venezuelan gold held in its vaults.

International tensions have also flared around the issue of humanitarian aid, with US and Venezuelan opposition ultimately failing to force an estimated $20 million worth of aid across the Venezuela-Colombia border on February 23. The operation faced strident criticism from international agencies such as the United Nations and the Red Cross, who refused to take part in the “politicization” of aid.

During Tuesday’s UNSC meeting, UN aid chief Mark Lowcock stated that Venezuela is facing a “very real humanitarian problem” and talked about the need to step up UN efforts in the Caribbean country. UN Secretary General Antonio Guterres later tweeted that the UN estimates there are 7 million people in need of aid in Venezuela, and that the UN is working to increase its assistance “in line with the principles of humanity, neutrality, impartiality and independence.”

UN agencies have increased their work in Venezuela in recent months, most recently via an agreement between Caracas and the UN’s Central Emergency Resource Fund for US $9.2 million to address the health and nutritional impacts of the country’s severe economic crisis. President Maduro has also appealed for UN assistance in countering US sanctions to bring medicines and medical equipment to Venezuela.