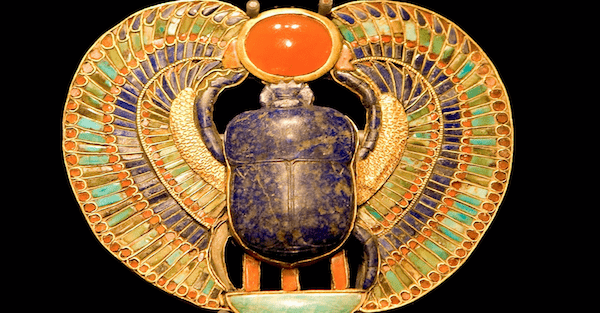 At the peak of its power in 1350 BC, thousands of years ago, ancient Egypt was like nothing ever seen before.

The great Kingdom was thriving under an efficient system of agricultural production and trade with foreign nations.

Egyptians had learned to adapt to the natural irrigation of the Nile river to produce surpluses of food, which supported a larger population, trade specialization and social and cultural development.

Mineral exploitation in the surrounding areas gave Egyptians great resources with which to trade with foreign empires – and led to great wealth for the kingdom.

New technologies were invented at an astonishing pace: there are records of discoveries in medicine, construction, and mathematics dating from Ancient Egypt that we still use today (yes, that’s how they built the Pyramids).

Ancient Egypt also gave us the first peace treaty ever, and new forms of literature.

Nefertiti, the wife of the Pharaoh Akhenaten, led a religious revolution away from a common belief in several gods, to the worship of just one – the Sun god – the first instance of monotheism ever recorded.

Monuments, sculptures, masks, statues, amulets – you name it. Egyptians were great craftsmen, and their art was widely circulated around the world.

Today, most of the world’s major historical art museums carry some form of Egyptian art.

So it should come as no surprise that despite the more than 3,000 years that have passed, antiquities from Ancient Egypt have tremendously grown in value.

This week, a granite statue from ca. 1350 BC will be on auction sale in New York for a starting price of $4.5 million.

I don’t know about you, but I’m interested in anything that holds value with that kind of longevity.

That’s one of the reasons why gold is such a sensible asset to hold: it’s scarce, portable, and has been valuable since ancient times.

Egyptian art is even more scarce. No one can go back in time and create more of it.

So as a means to preserve wealth over the long-term, it makes sense to consider owning some rare, collectible assets as part of a larger strategy… rather than having 100% of your savings in fundamentally flawed paper currencies.

That is why this past weekend, I held an event for our Total Access members (our highest level of membership at Sovereign Man) to learn about some of the most compelling collectible assets.

We had some of the world’s foremost experts teaching us. It was 100% educational… there was absolutely nothing to buy and sell.

We even arranged for one of the most prominent museums in the country to shut down for our group, where we enjoyed cocktails and a private tour with the curator and a handful of talented artists.

Collectible assets, just like anything else, derive value from supply and demand.

And supply is all about scarcity.

In addition to scarcity, quality is another important factor: collectibles in better condition will typically be stronger stores of value.

For example, a ‘mint condition’ Mickey Mantle rookie baseball card is worth millions of dollars, whereas one with just a bit of wear and tear is worth around $800,000.

Similarly, rare coins in flawless condition will hold value better than the same coin with scratches and scuffs.

Demand with collectible assets tends to be strongest with brands, or historical events, that have the widest following.