By purchasing increasingly worthless paper assets, we can thank the central banks for propping up the global economy for the past decade.  Since the 2008 financial crisis, the top central bank’s have acquired $13 trillion worth of assets on their balance sheets.  While the central banks label these balance sheet items as “Assets,” they are nothing more than glorified Paper IOU’s.

And these trillions of dollars worth of paper IOU’s can only get their value from the burning of energy… a critical factor overlooked by mainstream financial analysts.  Without growing global oil production, most of these “supposed” assets would see their values plummet.  Unfortunately, the world is heading towards a collapse of global oil production due to the Falling EROI – Energy Returned On Investment and the Thermodynamics of oil depletion.

Yes, the disintegration of the global oil industry is now speeding up.  Here are a few headlines that should provide some clues on how the situation is rapidly deteriorating:

THE BLOODBATH IN U.S. SHALE STOCKS CONTINUES: Worst Is Yet To Come

As you can see, the majority of the articles are on the U.S. Shale Industry.  We must remember, the majority of the increase in global oil production over the past decade (80+%) is due to ramping up of the U.S. shale oil and Canadian oil sands operations.  U.S. shale oil production has surged by more than 7 million barrels per day (mbd) since 2008:

Yes, it’s true that I underestimated the growth of U.S. shale oil.  I truly had no idea that the insanity would go on this long, but as long as there are new suckers to part with their money, the CIRCUS will continue.  By the way, look for a major ENRON type scandal to take place in the U.S. shale oil industry.  Thus, when the Fan hits the Shyte, watch as shale investors flee like rats from sinking ship.

And it looks like the ball just might be rolling due to this GEM of a news-release: WHITING PETROLEUM INVESTIGATION INITIATED by Former Louisiana Attorney General: Kahn Swick & Foti, LLC Investigates the Officers and Directors of Whiting Petroleum Corporation:

On January 2, 2019, The Wall Street Journal reported in an article titled “Fracking’s Secret Problem—Oil Wells Aren’t Producing as Much as Forecast” that, according to a review of available public data on production, many of the Company’s shale wells, specifically those involved in the fracking process, were producing oil and gas at a much lower rate than the Company had forecasted to investors. Further, the report noted that “findings suggest current production levels may be hard to sustain without greater spending because operators will have to drill more wells to meet growth targets.”

KSF’s investigation is focusing on whether Whiting’s officers and/or directors breached their fiduciary duties to Whiting’s shareholders or otherwise violated state or federal laws.

Basically, the lawsuit is trying to find out if Whiting’s officers or directors failed in their fiduciary duties to inform investors of the negative implications of the severe decline rate of shale oil wells.

Get used to seeing more of this as the SHALE OIL PONZI TURD starts to unravel, and with it, hundreds of billions of debt held by investors.

And if you think the major oil companies like Exxon are going to make it rich producing shale, please read my following article, EXXONMOBIL U.S. OIL & GAS FINANCIAL TRAIN-WRECK: Producing Shale Is Destroying Its Bottom Line.  Exxon is spending gobs of money increasing shale oil production but its U.S. upstream earnings (oil and gas wells) are a complete disaster.

I believe large shareholders of ExxonMobil will eventually have a meeting and force management to stop throwing good money after bad at shale oil.  Mark my words.

Lastly, on this subject of U.S. oil production, the next chart shows the long-term oil production since 1920.  You will notice that it took approximately 30 years (1940-1970) for U.S. domestic oil production to increase by 6 mbd.  However, the magicians in the shale industry did it in less than 10 years:

Take a good look at those oil production trends shown by the arrows.  So, how quickly do you think U.S. shale oil production will decline?  If you answered that it will most likely decline the same way (or faster) than it went up, then I would say you got your head screwed on correctly.  Moreover, the companies producing U.S. oil from 1940 to 1970 probably didn’t go into serious debt while the shale industry has racked up more than $300 billion.  A most clever trick.

Maybe if we are really lucky, the U.S. Shale Oil Ponzi might just start to unravel right around Halloween… TRICK OR TREAT.

The reason the oil producers during the 1940-1970 period didn’t go into much debt (probably made nice profits for the most part), was because conventional oil production has a high EROI and ROI (Energy Returned On Investment & Return On Investment).  However, shale oil, which is unconventional oil, has a very low EROI and an ROI.  Seemingly, a good secret kept from investors by the PR departments at the shale oil companies.

Please keep an eye on U.S. shale oil production as I believe it will be the canary in the coal mine in regards to the peaking of global oil production and the ensuing collapse of financial assets and debts.

As I mentioned at the beginning of the article, central banks purchased $13 trillion worth of assets since the 2008 financial crisis.  According to a chart by Lioncrest Capital, the total of the top central banks’ balance sheet assets are approximately $20 trillion.  Now, I did see some data by Ed Yardenisuggesting that the figure is closer to $19.6 trillion.  But hey, what’s a few hundred billion amongst friends… ah?

Regardless, I highly doubt the Fed or other central banks will sell these assets into the market, especially since the global economy is now rolling over.  But, please… don’t mention that to the sheep trading in the stock market as it continues higher.

Now, if we compare the increase in central bank balance sheet assets to gold, there is a troubling trend unfolding:

While central banks bought $13 trillion of increasingly worthless assets since 2008, the value of central bank gold reserves increased a paltry $446 billion.  Furthermore, central bank gold reserves accounted for 12% of total balance sheet assets in 2008, but has fallen in half to only 6.4%.  Now, I say increasingly worthless assets because if these assets were “high quality,” then why in the hell didn’t someone else buy them??  Why did the central banks have to come in and buy these assets?  Well, the answer is probably a simple one. 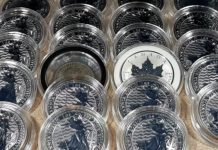