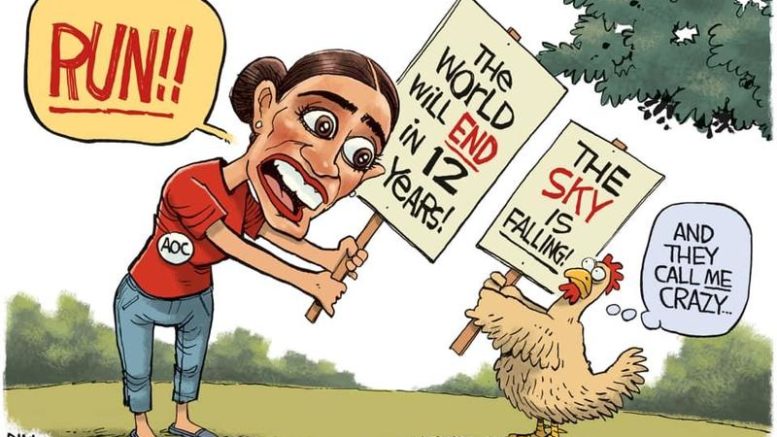 It’s always just around the corner, but it never arrives. Prophets of climate doom like Al Gore and Alexandria Ocasio-Cortez (D-NY) are almost laughable except that so many people continue to be lured by their siren call. ⁃ TN Editor

In recent years, the controversial subject of global warming and a potential “climate disaster” has received a lot of media attention.

There are progressive politicians who are now arguing that unless profound changes in public policy are made to reduce worldwide carbon emissions, we face an impending world-wide climate related catastrophe.

Former Presidential aspirant and Vice-President Al Gore was one of the first national personalities to raise the subject of global warming and the potentiality of an impending climate related catastrophe with the release of his Oscar-winning documentary, An Inconvenient Truth in 2006.

Needless to say, such dire prognostications have gained the attention of both the scientific and political communities. So important is the issue of global warming, in 2016, many different countries around the world agreed to sign the “Paris Agreement,”  an accord within the United States Framework on Climate Change (UNFCCC), pertaining to greenhouse gas-emissions and other climate related issues.

The Paris Agreement’s long-range aspiration is to regulate the economy to keep the global average temperature to well below 2°C above pre-industrial levels; and to limit the increase to 1.5 °C, since this, it is claimed, would substantially reduce the risks and effects of climate change.

However, the Paris Agreement has had its detractors, as evidenced by U.S. President Donald Trump who announced in June 2017, that he would withdraw the United States from the agreement.

In the nation of France itself, the Paris Agreement has been controversial and gave impetus to the “Yellow Vests movement,” a populist grassroots protest movement that saw hundreds of thousands of citizens mobilize against French President Emmanuel Marcon and his government for significantly raising taxes at the pump in an effort to reduce fossil fuel consumption out of concerns related to global warming.

Conversely, many political progressives in the United States have decried and protested President Trump’s decision to pull out of the Paris Agreement and have argued that the citizens of earth are sitting on a virtual ticking time bomb and have issued dire warnings that we have just a decade to avert an unparalleled catastrophe of unfathomable proportions.

Some of these progressive politicians and purveyors of the “Green New Deal” have argued that unless the United States government spends trillions of dollars on combating the epic destruction almost certain to come in approximately a decade or a little more, it is almost certain that the world will come to an end due to climate related foods, droughts, epidemics and killer heat waves without parallel in human history.

While I will not contest that we all need to care about the environment and avoid polluting the earth, I find it interesting that those who say that there is an impending climate disaster, keep pushing the date further into the future when such a worldwide cataclysm is supposed to take place.

Case in point: Al Gore distributed his documentary An Inconvenient Truth to the American public in 2006. In that film, Gore argued that the world come to an end in ten years due to global warming from the release of that film.

Unless the US stops printing money, the dollar will collapse