Silver demand was up 4% and hit a three-year high in 2018, according to the 2019 World Silver Survey released by the Silver Institute this week.

Physical demand for silver came in at over 1 billion ounces last year.

Meanwhile, silver mine production fell for the third straight year, dropping 2% in 2018 to 855.7 million ounces.

According to the Silver Institute, a modest rise in jewelry and silverware fabrication, and a healthy jump in coin and bar demand helped drive overall demand for the white metal higher.

Silver jewelry fabrication increased for the second straight year, rising 4% to an estimated 212.5  million ounces. India was a big player in the silver jewelry market. A surge of buying in the fourth quarter drove annual consumption up 16% and set a new yearly record.

There was a slight contraction in the use of silver in industrial applications. A drop in silver demand from the photovoltaic sector (PV) accounted for the bulk of the decline, offsetting annual increases in electronics and electrical and the brazing alloys and solders sectors.

The above ground silver stock declined 3% from the previous year. However, inventories remain high. This was the first decline in above-ground stocks after nine consecutive years of growth.

Despite the supply and demand dynamics, silver prices struggled last year, averaging $15.71 an ounce. That represents a drop of nearly 8% from 2017. The silver price was drug down along with gold by a surging dollar.

The silver-gold ratio remains historically high. At the time of this report, it was running at over 86-1. As we’ve been reporting for the last year, this is essentially silver on sale. The ratio hit a quarter-century high last November.

Given the supply and demand dynamics, along with the prospects of a weakening dollar in the midst of the “Powell Pause,” it seems likely that gap will close.

“People are turning to silver because of its huge price divergent with gold,” analyst Johann Wiebe told Kitco News. “The gold-silver ratio is ridiculously high and is not sustainable, it’s just a question of when the ratio comes down.” 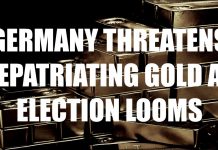