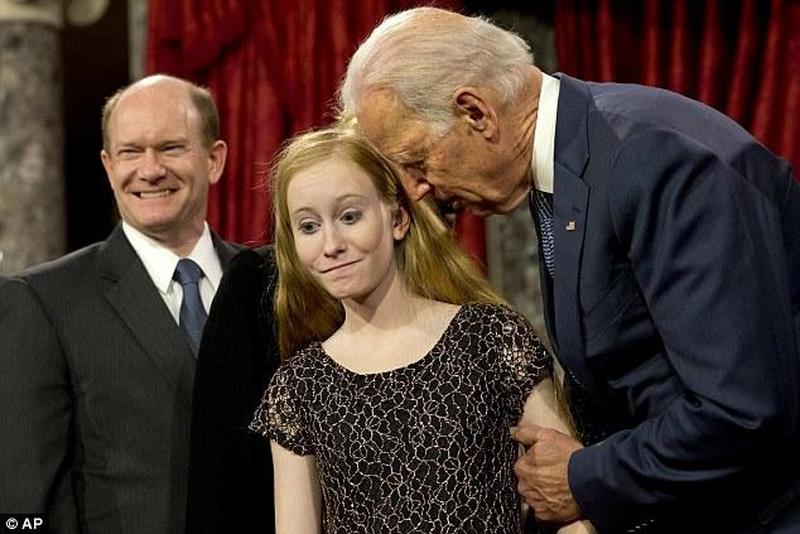 On Monday, a Connecticut woman claims that Biden touched her inappropriately and “rubbed noses” with her during a 2009 political fundraiser in Greenwich.

“It wasn’t sexual, but he did grab me by the head,” Amy Lappos told The Hardford Courant on Monday. Lappos is a former congressional aide to Rep. Jim Hines (D-CT) and first posted about the alleged incident in the Facebook group Connecticut Women in Politics on Sunday using a pseudonym.

“He put his hand around my neck and pulled me in to rub noses with me. When he was pulling me in, I thought he was going to kiss me on the mouth.”

I never filed a complaint, to be honest, because he was the vice president. I was a nobody,” said Lappos. “There’s absolutely a line of decency. There’s a line of respect. Crossing that line is not grandfatherly. It’s not cultural. It’s not affection. It’s sexism or misogyny.”

A spokesman for former Vice President Joe Biden says that recent reports of decades-old images and footage of him creeping on women and children is a “false narrative” perpetuated by trolls from the “dark recesses of the internet,” according to Business Insider.

Biden spokesperson Bill Russo said in a statement Monday that multiple pictures being used to paint the potential 2020 presidential candidate as creepily touching women are being misinterpreted and have been refuted by the subjects of photos that have gone viral.

“These smears and forgeries have existed in the dark recesses of the internet for a while,” he said. “And to this day, right wing trolls and others continue to exploit them for their own gain.” –Business Insider

It’s unclear what Russo means by “forgeries” – since the authenticity of the material has not been challenged to this point.

“There are other, even more insidious examples of claims about the Vice President that have no foundation: the use of photoshopped images and other manipulations of social media,” added Russo. “Perhaps most galling of all, a cropped photo of the Vice President comforting his grandson outside of his son Beau’s funeral has been used to further this false narrative.”

Which, of note, is distinctly different than the below picture of Biden about to mouth-kiss his grandson Hunter after taking the oath of office.

This also doesn’t appear to be a forgery:

At least two of the “creepy Biden” pictures have been addressed, however. One – showing Biden holding the shoulders of the wife of former Defense Secretary Ashton Carter was explained by Carter: “After the swearing in, as Ash was giving remarks, he leaned in to tell me ‘thank you for letting him do this’ and kept his hands on my shoulders as a means of offering his support”

Another photo of Biden trying to kiss the daughter of Democratic Sen. Chris Coons was explaned away after Coons told the Washington Post this weekend that he “did not think of it as anything.”

Former Democratic nominee for Nevada lieutenant governor Lucy Flores accused Biden of smelling her hair before planting a “big slow kiss” on her head in a 2014 incident.

SELCO: Everything Is Fluid When the SHTF – Including the Rules of Survival

SOCIAL ENGINEERING: “THE GOAL SHOULD BE TO MAKE MASKS A SOCIAL AND CULTURAL NORM”

Gold, Stocks, or Real Estate? This Data Can’t Be Unseen