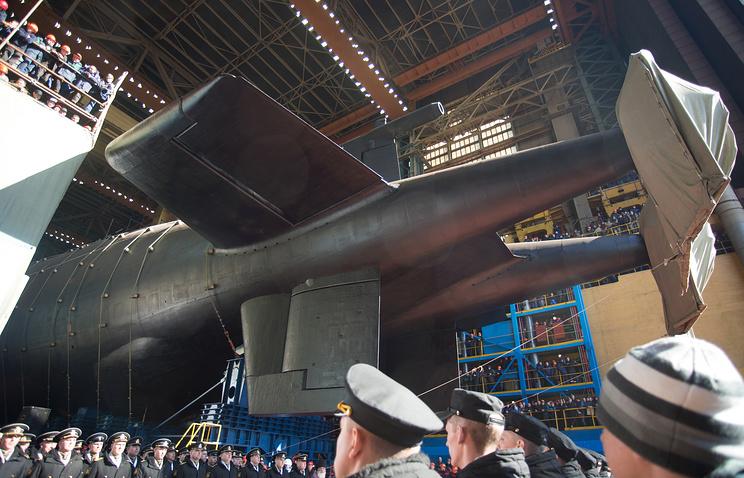 Russia has launched a new submarine that will carry underwater nuclear torpedoes capable of devastating enemy coastlines with a tsunami wave up to 500 meters (1,600 ft) that can leave behind radioactive isotopes, according to NBC News and US-Govt. funded outlet RFE/RL.

The U.S. intelligence agencies estimate Status-6 will carry a multi-megaton thermonuclear bomb payload. For comparisons’ sake the bomb dropped on Hiroshima was 16 kilotons, several orders of magnitude smaller. A one megaton bomb is the equivalent of 1,000 kilotons—one one million tons of TNT. Reports from Russia indicate the bomb could be as large as 100 megatons.

Status-6 is designed to attack enemy coastal cities, ports, shipyards, and naval bases. Once Status-6 arrives at its destination it detonates the bomb, causing an enormous amount of damage through blast and heat. A 100 megaton bomb would generate artificial tsunamis, carrying the destruction far inshore. –Popular Mechanics

Russian President Vladimir Putin oversaw the launch of the Project 09852 special-purpose nuclear-powered submarine Belgorod at the Sevmash Shipyard in Northern Russia on Tuesday, according to Russian state news agency TASS. Of note, the submarine is not yet operational. Construction will be completed afloat, according to TASS, which predicts that the submarine will begin sea trials in 2020, after which it will be delivered to the Russian navy at the end of that year.

A Russian defense industry source told TASS that the Belgorod will carry up to six strategic underwater drones, which can travel up to 54 knots (62 mph) underwater and “avoid all acoustic tracking devices and other traps,” according to Popular Mechanics.

The underwater drone later named Poseidon was unveiled by Russian President Vladimir Putin in his State-of-the-Nation Address to the Federal Assembly on March 1, 2018. The Russian leader said that Russia had already developed drones capable of moving at very large depths and to an intercontinental distance at a speed multiply exceeding the speed of submarines, the most advanced torpedoes and all types of surface ships. As the Russian president said, these drones can be armed with conventional or nuclear munitions, which will allow them to strike a broad range of targets. The Poseidon drone will feature an unlimited operating range and an operational depth of over 1 km. –TASS

In 2015, the Poseidon’s existence was ‘leaked’ during a state-run Channel One report, which noted that it would be launched from the Belgorod and 09851 Khabarovsk series submarines.

Popular Mechanics also notes that the Poseidon drones could be armed with a “salted bomb” which “salts the Earth” with the dangerous isotope Cobalt-60.