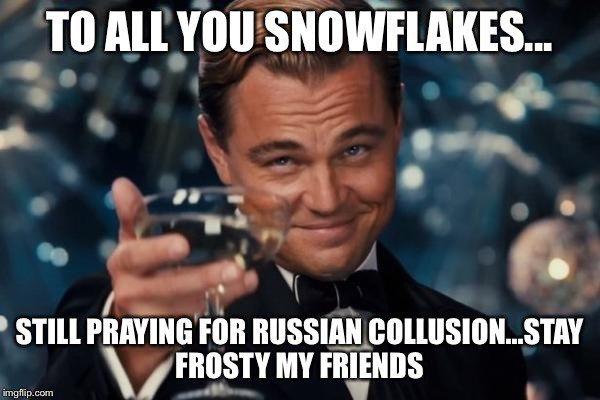 All the fanfare with the release of the Mueller Report three page summaries has the corporatist and defiance media in a tizzy. The deranged progressive zombies that follow every word that Rachel ‘MAD’ Maddow, bleeds out are wiping their own tears that the preordained narrative to bury the Trump movement is premature. Sorry, no celebration for the duped, delusional dregs in search of the most dangerous obstacle to their Marxist redistribution wonderland. The hate machine that trashes all things Trump has perfected the ‘Big Lie’. Accepting all the news that is unfit to print or the social media trolls which reinforce the ‘Fake News’ propaganda that the enlightened leftist cable toadies read off their Teleprompters, is like overdosing on a feel good drug before the inevitable crash.

For those who foster the repeated progressive psychedelic addiction, the only corporality comes from the every establishment elites that the “so called” leftist dissenters ingenuously lap up as gospel, have all been deceived. Now is a good time to take a refresher course in media dissemination. Reflect upon the definitive and unequivocal assessment of global power from the outstanding 1974 movie Network. Arthur Jensen Pitches Economic Determinism’s New World Order to Howard Beale is the most revealing admission ever to be expressed on the silver screen for public consumption.

“Jensen: You have meddled with the primal forces of nature, Mr. Beale, and I won’t have it!! Is that clear?! You think you’ve merely stopped a business deal. That is not the case. The Arabs have taken billions of dollars out of this country, and now they must put it back! It is ebb and flow, tidal gravity! It is ecological balance!

Am I getting through to you, Mr. Beale?”

Well, the depressed brain cell cripples are Trump haters because they want to dismantle the traditions, heritage, institutions and fundamental values of the founding of America. They want an unrestrained and authoritarian centralized despotism. Evading their limited capacity to perceive the overwhelming power that dictates the “primal forces of nature” is a basic flaw in Leftist mindset.

The Union Broadcasting System’s lost credibility exemplifies any of the mainstream media. Only a ratings jump start with their prophet of the airwaves, Howard Beale and the infusion of the Tabloid TV format could get the attention of the uninformed audience.

Trump TV is too hurtful for the snowflakes viewers. However, the smears and slander against the “Drain the Swamp” movement demands a manufactured fabrication 24/7 storyline. The authenticity deprived has little or no willingness to confront the real world. Lest one forgets, the lessons from Jonestown are ignored much in the same way as the programmed marionette hang from a lynching rope of one’s own making.

Daniel J. Flynn writes in the National Review, Drinking the Kool-Aid: Remember When Jim Jones Was a Hero to Democrats? The dogmatists followed their leader right into a cold grave.

“Jim Jones, borrowing a concept from Huey Newton, called the mass murder of more than 900 member of the Peoples Temple in Guyana 40 years ago “revolutionary suicide.” His indoctrinated followers regarded their nihilistic coda a political act. One of the willing suicide cases announced on the death tape, “No other way I would rather go than to give my life for socialism, Communism, and I thank Dad very, very much.”

But the first draft of history depicted the political fanatics as Christian fanatics, despite the group’s explicit atheism and distribution of Bibles in Jonestown for bathroom use. The words “fundamentalist Christianity” were used in a New York Times article to describe Jones’s preaching. The Associated Press called the dead “religious zealots.” Specials on CBS and NBC at the time neglected to mention the Marxism that animated Peoples Temple.

Beyond the ideology that inspired Peoples Temple’s demise, the media whitewashed the politicians who aided and abetted them.”

In today’s world the refusal to accept the vindication of President Trump by one of their own Democrat cohorts in Robert Mueller, has endowed the resistance zealots of the current “Peoples Temple” with their own death wish. They rely upon the approved media for their indoctrinated news. Just Google any political topic and the results will return acceptable results from allowed sources. The rule of thumb to follow, if it appears in a Google search, it most likely will have a progressive bias, as most objective assessments are censored.

Upon the acceptance of Donald Trump as the legitimate President of the United States, the recovery from progressive delusion can begin. Acknowledging that the liberal establishment media is based upon a fictional fairy tale, which broadcasts continual lies, is a necessary step in the healing process.

DOJ Moves To Break Up Google; ‘Most Important Antitrust Case In A Generation’