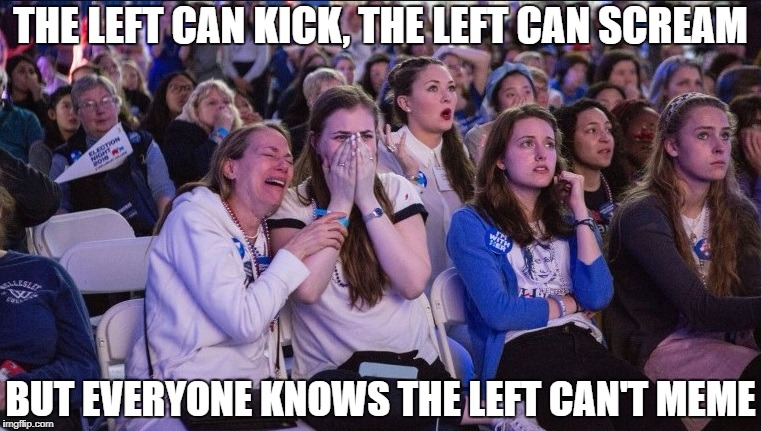 The liberal media, from websites like Mother Jones, to cable news outlets like CNN, are understandably concerned at how effective “memes” are becoming for conservatives in communicating an idea or behavior, using an image or GIF, that goes viral spreading from person to person online, often with the aim of conveying a specific theme, or meaning represented by the meme.

WHY ‘THE LEFT CAN’T MEME’

Recently the leftist website Mother Jones headlined a lengthy piece “The Left Can’t Meme”: How Right-Wing Groups Are Training the Next Generation of Social Media Warriors,” with the sub-header “Memes helped elect Donald Trump. Now well-funded conservative groups are using them to proselytize.” In that piece the writers describe what they find disturbing about “the coming meme war of 2020.”

According to Johnson, the answer to that question is memes. These bits of humor or political propaganda—generally images overlaid with a caption designed to go viral—are best known for littering social media, but some experts think they might have helped elect Donald Trump. Or as notorious internet troll Chuck Johnson has said, “We memed the president into existence.”

Following that unexpected meme-driven success, well-funded conservative groups are making a more organized push to train young internet-savvy right-wingers in the art of meme-making, enlisting a growing army in what they see as the coming meme war of 2020. Turning Point USA, the conservative campus group that organized the conference, is merely one of these organizations seeking to sway hearts, minds, and elections via meme trainings. And it’s clear that when it comes to political memes, the left—which has never taken them very seriously—is trailing the right badly, and falling even further behind.

It is that inability to meme effectively on the left that has caused the EU to pass Article 13, to ban memes, as Stefan Stanford recently detailed in an piece titled “Article 13 Offers Proof Globalists Are Terrified Of ‘Meme Warfare’ In 2020 As EU Enters Orwellian End Game After Draconian Law Sets Up Abolishment Of The ‘Free Internet.” 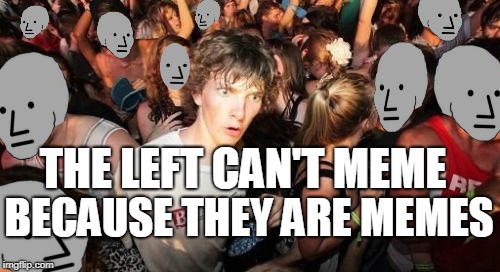 A little further down in the Mother Jones article they explain that perhaps no one understood the effectiveness of memes better than the former executive chairman of Breitbart, Steve Bannon, who helped president Trump get elected in 2016, pointing out that “In 2016, only 5 percent of Breitbart‘s posts were of images, but those images accounted for half of the site’s most-shared posts on Facebook.”

As almost any website owner can tell you, when promoting an article or website on social media, when a post is shared with a captivating image, or a meme, it will garner far more “shares” than a post without an image, which is what makes memes so effective. To be able to make a point with an image, communicating a simple idea via a caption or an overlayed image, will make that idea stick in the mind far more than reading a lengthy post, especially if it is humorous.

That right there is why “The left can’t meme.”  Everything offends them, they have lost the ability to find humor in most things because they are too busy looking for something that may offend someone, somewhere, because they are so focused on being politically correctand attempting to force everyone else to be politically correct, they have stunted their own sense of humor.

Let me provide a recent example: Burger King put out a promotional ad for their new “Vietnamese” burger, where people are seen holding the burger in massively over-sized chopsticks to feed it to another person. The eight second clip shown below.

Some found it amusing, some thought it was silly, but liberals….. no, they screamed “racist.” In fact one woman was so offended that Huffington Post interviewed her.

“I felt extremely fed up, and tired,” Mo said about seeing the ad.

People of color “are constantly having to deal with microaggressions as well as outright hatred and it just never ends,” she added. “And I could not believe that such a concept was approved for such a big, well-known company. It says a lot [about] what kind of demographics they must employ across the board for their ads.”

Humor is subjective, something I find amusing may not be another person’s cup of tea, so to speak, but to take offense at every little thing, and to make a huge deal out of it, is one of the main reasons why “The left can’t meme,” and the reason they are so freaked out over the fact that memes have become such effective tools to promote conservative ideology, or just to make a point.

CNN’s Brian Stelter on his Sunday ‘[UN]Reliable Sources’ show, discussed the “meme wars,” asking his guest David Axelrod, if “Democrats understand what they’re up against,” after showing a Joe Biden meme created by viral meme maker Carpe Donktum, to which President Trump retweeted on Twitter.

“Here’s what Biden is up against. Here’s how it may keep coming back and back and back,” Stelter said. “On one level, it’s just a funny meme. On another level, this is how politics is waged these days. These are the meme wars in action. Do you think Democrats understand what they’re up against?”