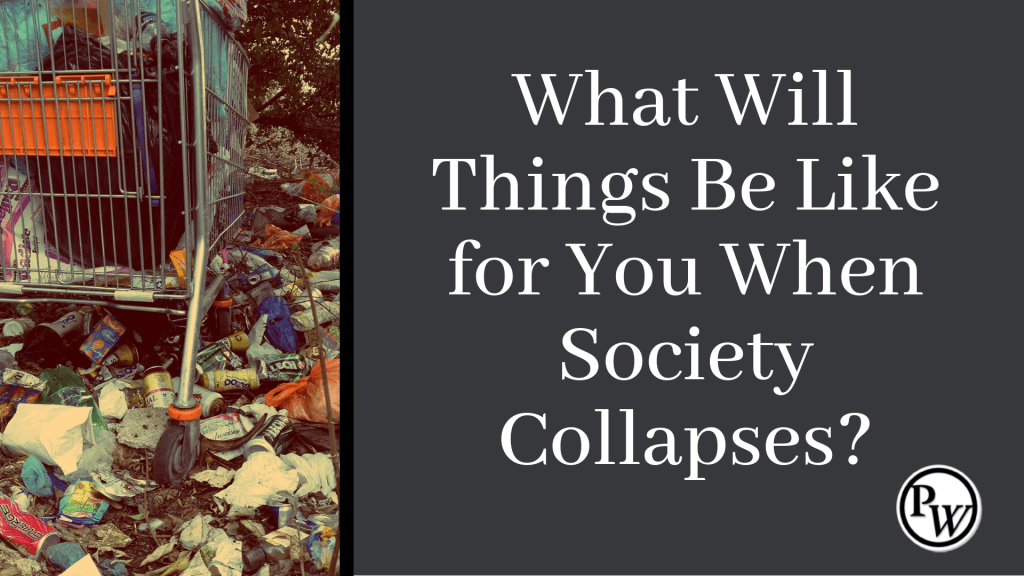 Time of Revelations has come.

Jobless, just with some non-regular income here and there, and my 5 years worth of reserves almost entirely depleted, I am close to the bottom.

I have started to think that perhaps fleeing was not the smartest choice, given that we had some other alternatives that could be managed.

This said, I have been under a serious retrospective, and I have arrived at some important conclusions that I will do my best to explain in the subsequent text.

When a collapse occurs, you’ll have to make hard decisions.

One, my efforts to be independent of the power grid were not enough. Being the family head and with only one salary, and whatever I could earn with my former online job (that later would be my main income when the final stages of the collapse begun), that´s highly understandable.

However there were some precautions that worked very well: three gas bottles, allowing us to easily buy one bottle whenever the lines were short – yes, there were moments when the truck arrived and people were barely arriving, that we could go to take a place in the line, call home and my wife would bring the empty bottle. Upon her arrival, the line was already two or three hundred persons, with me being usually among the first 20s or 30s. Two bottles at home, one being used, another one in storage, and an empty one just waiting. I had to use my camping stove (gulf war edition) several times, but being over 10 years old and without being able to find a spare seals kit, it was not reliable to use and had to be stored again.

Now, with another reference frame, I can see how important is having affordable means to cook a meal. Gas is expensive as heck around here. Electricity? Forget about it. And open space is limited, so using a rocket stove is somehow…problematic, to say the least. Although I would love to taste my loved arepas made in the grill. Even better if they were made by my mom´s lovely hands.

Please let me use my imagination for a moment. Once the collapse in its final stage is starting, the trigger for me was to lose my larger income source. The regular salary was not enough to afford us a living, back then, and I knew it: we had to bug out.

I could have done things differently.

If our situation had been another, we could have just packed our stuff, sort the inconveniences of the road, I have told you before more or less which kind, and arrive safely to our place. Not exactly comfortable, but it was home. Very friendly weather, my family very close, we would be together, and some time and space to try to grow a garden. Albeit this part was not going to be exactly easy, because dry season there is really dry (and rains dogs and cats in the rainy one), it could be sorted with the proper precautions (which I did not have even yet), and I mean the water reservoirs. We could have started a garden with yucca, tomatoes, perhaps onions, and carrots. There was some citrus, and we could have seed beans, of any kind. Some chickens for eggs and broiler, and maybe some classes for kids in the town, or…who knows. Life would have been much easier for everyone, especially for the younger members. Most of our savings would have remained untouched, and we could have invested them in the improvement of the actual infrastructure, to deal with what the collapse brought along. Taller fences, some defense means, a better gate, a chicken coop and maybe goats, improvements of the actual garden…lots of fertilizer, pipes for drop watering, and what not. There were a lot of…family issues that brought me here, but without that strong influencing elements, I would have bugged out and tried to survive with what we could have grown, from our small patch of land. I was going to need much more coffee plants, that’s sure, but I had savings enough back then. It´s sad to see people fighting over a kilo of sugar in this country when there are lots of places where sugar cane can be grown. Processing is not that hard. It has been done manually for centuries already. But that knowledge seems to have been replaced by the oil wisdom.

Making the right choices can be extremely difficult.

I wanted to share that with you because it had been circling in my head these last few weeks, and the conclusions are as follows. It´s extremely hard to make the right choices. Even if you make them, you are unsure about its timing. And to see how people you love get affected by such choices can break your heart. Truly. You have to be ready for that. It is good to hear and try to make choices team labor. And even so, perhaps such choices are not going to be the better ones. Their consequences can last for years before you can redirect everything in the proper direction.

Most of you, I am sure have lots of more experience in life and this can seem obvious. But for those of you that have not, now you know it. Think very carefully about your priorities, elaborate a financial plan to build an infrastructure you can rely on, and make it real no matter how barely enough it could look like. Because if something happens, like a job loss or something else equally traumatic…you will have a parachute instead of the flying squirrel suit and the lake I had. A lake where I am trying desperately not to drown in.

Steam generation may be an alternative when the grid goes down.

OK now, let´s divert our attention to more practical and useful stuff. Forget about my shady mood these days. I have been doing a little research, given the total collapse of our oil and gas industry, our power generation system, etc, etc. There is no way to resolve this problem with the grid in the short term. Once happens whatever is going to happen (and I am sure uncle Donald is going to make it happen) it is very likely that we are going to be called again to show for work. Not so fast…without a working power grid, this is going to be…rough. I have absolutely no experience with alternatives to fossil fuels, but I do trust a lot in modern materials engineering. I trust in knowledge, especially. For basic needs, there is a source that I have not seen as taken seriously, perhaps because it can be dangerous if not handled properly. This is the steam generation. Albeit the biomass generation of our tropical rainforest is not even close to the regeneration capacity of your pinewoods, it is possible to use this old, but proven technology in an environmentally safe, and most importantly, a sustainable way. Maybe I am too old fashion for some things (I have been drooling over restoring a diesel Sterling engine from the middle 1930s that my dad has someplace laying around) but a low rpm, low-pressure steam generator coupled to the proper boiler maybe is a way that could be very useful for you, my dear and truly appreciated people of the North…because remember:

(I just HAD to say that LOL, sorry) Now, seriously, a good steam engine can be attached to a 2kW generator and still be under the 300 rpm and 100 psi, according to a specialized website I checked. Something good for you people is that it generates a lot of excess of heat. This, of course, can be used, and there is a lot of possibilities. Water heating for the restrooms, home heating, maybe for the barn where the animals are. It´s a very good way to recharge your battery bank if there is no sun, and it´s snowing or something. Something that attracts me especially is, a traditional steam engine built with modern materials will be something that future archaeologists will find in the next centuries in your homestead. It won´t be easy for it to explode as it was in the past.

If conventional firewood is used, there will be a lot of smoke being generated. Then, perhaps you would like to attach your smoking utility.