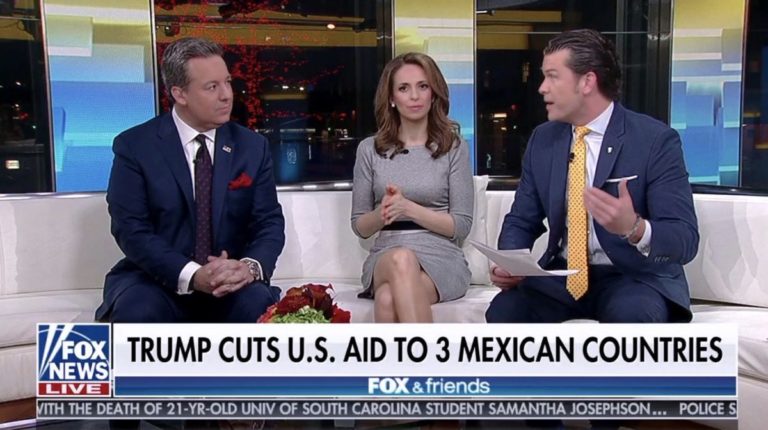 A hefty case can be made that the Empire of Chaos currently has no allies; it’s essentially surrounded by an assortment of vassals, puppets and comprador 5th columnist elites professing varied degrees of – sometimes reluctant – obedience.

The Trump administration’s foreign policy may be easily deconstructed as a crossover between The Sopranos and late-night comedy.

While the U.S. empire’s existed in various states of decline for much of the 21st century, I’ve been opining on the topic with far more frequency and urgency since the election of Donald Trump. This isn’t because he’s fundamentally much different from the imperial managers (aka presidents) that came before him on foreign policy, but because his personality, style and overall boorishness serve to accelerate the pace of decline.

As many astute observers have noted, what really bothers establishment types on the “NeverTrump” right and the “Russiagate conspiracy theory” left is not so much what Trump does, but how he does it. These political cliques may disagree on many issues, but what they have in common — aside from Trump derangement syndrome — is a love affair with U.S. empire and an unwavering dedication to the maintenance of American geopolitical dominance at all costs.

Both the NeverTrump right and the Russiagate conspiracy theory left are concerned that Trump, unlike Obama, is a poor global salesman for empire. Obama had the rare quality of being able to bailout bankers and keep them out of prison, pass healthcare “reform” only an insurance company could love, and expand American wars across the globe and still be revered around much of the world and celebrated as a liberal at home. That’s the sort of person you need in charge to keep a corrupt and violent empire running smoothly.

It keeps the mask on a while longer and allows everyone to pretend the status quo still works. In contrast, there’s no lipstick on the imperial pig under Trump and his band of creepy recycled neocons. It’s just an endless stream of threats and sanctions, and most importantly, an increased willingness to use the U.S. dollar and the global financial system as a weapon, even against allies.

This is called weaponization of the financial system.
If a global financial system can be weaponized by one nation (empire) it fails to serve a neutral function and is on its last legs. Very dumb move. https://t.co/HJjPFQhFUh

What’s most interesting is that as the U.S. runs around sanctioning and trying to regime-change any sovereign state that dares to be anything less than an obsequious poodle, many traditional allies have begun to bristle. We saw it with the opening of a new trade channel earlier this year by France, Germany and Britain to avoid U.S. sanctions on Iran following Trump’s unilateral withdrawal from the JCPOA last May. We saw it again recently with the European Commission decision to allow individual countries to decide for themselves on Huawei’s participation in the 5G buildout, despite the Trump administration calling for a ban. We also saw it with Italy recently signing up for China’s belt and road initiative despite U.S. objections, as well as Xi Jinping signing a variety of deals with France last week while the U.S. remained in the midst of a trade war.

Am I the only one noticing that as the U.S. runs around sanctioning half the planet, China’s going around the world signing deals.

The mere fact that America’s European allies have been so glaringly dismissive of U.S. demands on a variety of fronts recently makes me consider that perhaps a multi-polar world isn’t coming at some point in the distant future, but is in fact already here. In other words, it seems the world as it stands today is already being shaped and influenced by a variety of geopolitically significant powers as opposed to just one. The only faction that doesn’t seem to understand this yet is the U.S. government itself, which is of course a very dangerous situation. The rest of the world doesn’t know how to break reality to those in charge of the levers of power in America. No one wants to tell them bluntly, because it’s become pretty clear that many diehard imperialists are still willing to double down on some very evil and stupid things in order to maintain an illusion of world dominance.

With the failed regime change attempt in Syria and now the flailing coup in Venezuela, it’s become clear the U.S. can’t easily get whatever it wants anymore despite its gigantic defense budget and 800 formal military bases in 80 countries. The most effective weapon the U.S. empire still currently has at its disposal is a dominance of the global financial system and the core role of the USD in it. This is why the Trump administration’s been flexing these financial tools so aggressively, but of course, this abuse of America’s exorbitant privilege is precisely what will ultimately lead to a serious decline in the global position of USD down the road (I expect it to play out by 2025).

All But the Lamest RINOs Are Getting Conserva-Woke Now

Report: Google Posts ‘Mostly False’ On YouTube Searches For Biden’s Fracking Statements. No Such Comments On Videos About Steele Dossier.