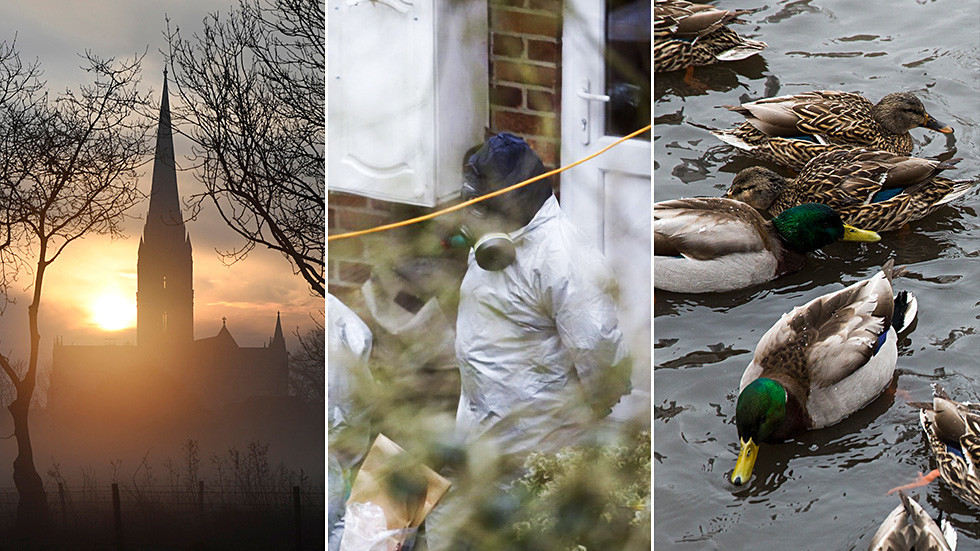 Images of hospitalized kids and dead ducks, allegedly supplied by the UK, were used by the CIA to persuade Trump to get tough on Russia after the attack on the Skripals. But there were no harmed children or ducks. What’s going on?

Just when you thought the Skripal case couldn’t get any more Pythonesque, it just did. According to a report published this week in the New York Times, the then-deputy director of the CIA, Gina Haspel, showed President Donald Trump pictures of “young children hospitalised by the Novichok agent that had poisoned the Skripals” along with “a photograph of ducks that British officials said were inadvertently killed by the sloppy work of the Russian operatives.”

The ‘emotional appeal’ from Haspel, made last March, was successful as Trump “fixated on the pictures of the sickened children and the dead ducks” and embraced the CIA’s “strong option” of expelling 60 Russian diplomats.

You can imagine the conversation, as scripted by Cleese, Chapman and Clark…

Haspel: ‘Look Mr President. I know a dead duck when I see one, and I’m looking at it right now’

Haspel: ‘The plumage don’t enter into it. It’s stone dead. And its name was Donald!’

The story – entertaining as it is – raises a number of serious questions.

So, let’s get our pipes from the rack above the fire, put on our deerstalkers and remember Sherlock Holmes’ famous dictum: “Once you eliminate the impossible, whatever remains, no matter how improbable, must be the truth.”

When you think about it there are four possible explanations for the New York Times story.

Number one is that children were hospitalized and ducks were killed, and it was all covered up from the public by the intelligence services. But this makes no sense at all, as the British authorities – with anti-Russian neocons very close to the action – were desperate to demonize Russia and would surely not have hushed up such terrible things had they actually happened.

Moreover, how possible would it have been to keep it all under wraps? Surely, the parents of the children hospitalised would have spoken up? Surely, some members of the public would have taken pictures with their smartphones of dead ducks floating on the water?

And if the Novichok fall-out was that widespread, why wasn’t the whole of Salisbury sealed off?

Then we’ve got the testimony of Dr Stephen Davies, consultant in emergency medicine at the Salisbury NHS Foundation Trust. Writing in response to a report published in The Times (London) which claimed “Poison exposure leaves almost 40 needing treatment,” Dr Davies stated:

“May I clarify that no patients have experienced symptoms of nerve agent poisoning in Salisbury and there have only ever been three patients with significant poisoning. Several people have attended the emergency department concerned that they may have been exposed. None has had symptoms of poisoning and none has needed a treatment… No member of the public has been contaminated by the agent involved.”

One presumes that the “three patients with significant poisoning” the good doctor was referring to were Sergei and Yulia Skripal, and DS Nick Bailey, none of whom, by any stretch of the imagination, could be described as ‘children.’

It’s also the first time that anyone has mentioned ducks being killed following the peculiar incident. Wouldn’t UK newspapers have been full of dead ducks pictures had local bird life in Salisbury been affected by the events of March 4, 2018? You can just imagine the ‘Evil Putin kills Arthur Mallard’ headline in the Sun, can’t you?

So, accepting there were no ‘hospitalized children’ or ‘dead ducks’ (and this was also confirmed this week by the director of public health at Wiltshire Council),what conclusions can we draw?

The second explanation is that the British authorities, in their desperation to get Trump to take “strong action”, provided fake photographs to the CIA. The photographs were of hospitalized children and dead ducks from somewhere else, not Salisbury. With the children they could have spun people being taken into hospital for precautionary checks as being ‘hospitalized.’

That would go along with plenty of other reports that the UK worried that the maverick Trump wouldn’t be as anti-Russian as it has been. Think back to early 2017 and reports of how terrified the British neocon faction was that the soon-to-be inaugurated US President would seek a rapprochement with Vladimir Putin. Think too of the ‘Golden Showers’ dossier, written by a former British Intelligence officer, and the similarities to the Zinoviev Letter of 1924.

Yes, the notion that Britain faked photos is credible, given the geopolitical context, but according to Deborah Haynes, foreign affairs editor at Sky News and the former defence editor of the Times, UK security sources have said they were unaware of children hospitalised or of wildlife killed in the Skripal attack. “If that’s true, I wonder what these images used by the CIA were!” Deborah asks.

Update: UK security sources say they’re unaware of children hospitalised because of #novichok or wildlife killed in #Skripal attack. May have been a photo of a dead swan though not evidence swan was killed by #Novichok. If that’s true, I wonder what these images used by CIA were!