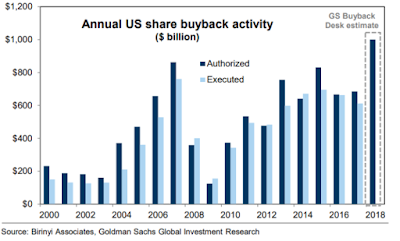 For anyone with a technical chart and two brain cells to rub together, they know that the primary thing that has helped the stock markets recover from their 60% decline from a decade ago was monetary intervention from the central banks. 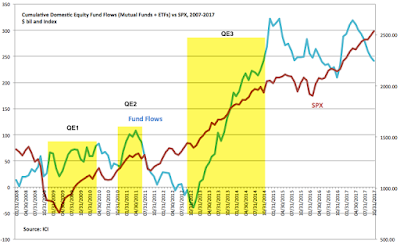 But when the Fed decided they needed to slow down their monetary expansion due to the yield curve threatening to invert and the advent of real inflation reaching above 10%in late 2016, something was necessary to replace the Fed put and keep stocks artificially propped up.  And that something of course was an increase in share buybacks.

Ironically, the December/January crash of stock prices entering into 2019 appears to have been intrinsically tied to the Q4 earnings period where the SEC placed a blackout for share buybacks during this time.  And of all things, on April 5 Goldman Sachs stepped up to validate this as Congress begins to discuss whether companies buying back their stock should be further regulated.

Goldman’s valiant effort to halt regulatory and legislative focus on buybacks – which also included Goldman’s ex-CEO Lloyd Blankfein issuing a rebuttal defending the practice on Twitter, saying the money “gets reinvested in higher growth businesses that boost the economy and jobs” did little however to stem the tide and as a result buybacks have been getting increasing scrutiny in the wake of the tax reforms in late 2017, when companies used money saved from the lower taxes as well as repatriated cash to return money to shareholders in record amounts, with total announced buybacks surpassing $1 trillion for the first time in 2018. As a result, Republican Senator Marco Rubio of Florida released a plan last month that would curb buyback incentives. Democratic Senator Chris van Hollen of Maryland may propose legislation curbing executive share sales after repurchase announcements. The culmination – so far – was the US Senate convening hearings and introducing legislation to prohibit public companies from repurchasing their shares on the open market. This was too much for Goldman, which realized that the carrot approach is not working, and late on Friday went all “stick”, when one month after his first report exposing buyback “misconception”, Goldman’s David Kostin doubled down, effectively warning that a ban on buybacks would likely result in a market crash, as “eliminating buybacks would immediately force firms to shift corporate cash spending priorities, impact stock market fundamentals, and alter the supply/demand balance for shares.” – Zerohedge

When you couple in the fact that the Fed announced they were halting the raising of interest rates during their January FOMC meeting, and even hinted towards returning to an interventionalist policy in markets,