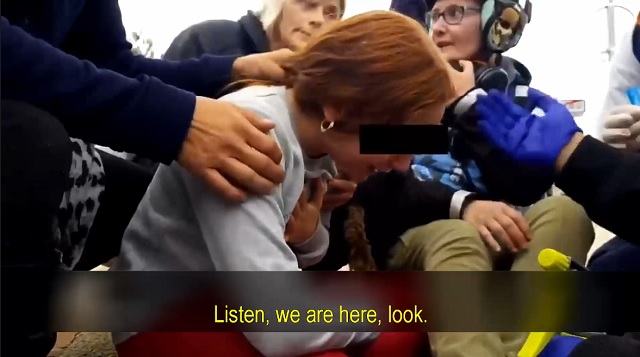 French President Emmanuel Macron’s stormtroopers gassed children playing on a merry-go-round at a park over the weekend while attempting to shut down the yellow vest protests, according to video reports.

From Gates of Vienna:

The following videos show two separate incidents of police brutality in France during last weekend’s Yellow Vest demonstrations. Many thanks to Ava Lon for the translations, and to Vlad Tepes for the subtitling.

The first video was recorded during a Yellow Vest demonstration in the city of Nantes in Brittany. The protest was close to a public park where a “fun fair” for children was taking place. The police shot gas (presumably tear gas) at the demonstrators, and inadvertently gassed the children on a merry-go-round. Towards the end of this clip you can see people helping a little girl who was incapacitated by the gas:

The second video records events at a Burger King during the demonstration. The exact location in France is not clear. In it you see several young people trapped at the back of the restaurant, lying helplessly on the floor while riot police beat them with batons:

Though the media hyperventilated for weeks on end over the Trump administration using tear gas to repel illegal immigrants attempting to invade our southern border, they couldn’t care less about Macron repeatedly gassing his own citizens to shut down protests against globalism.