Ecuador’s president is threatening to soon decide on Julian Assange’s refuge after his government falsely accused WikiLeaks of publishing files about a scandal that threatens to bring the president down, as Elizabeth Vos reports.

Ecuadorian President Lenin Moreno said Tuesday he would decide “in the short term” the fate of Julian Assange after claiming that WikiLeaks had “repeatedly violated” the terms of Assange’s asylum in Ecuador’s London embassy by commenting on a scandal linking a Panamanian investment company with Moreno and his family.

Those conditions, or protocol, were imposed by Ecuador on Assange in March 2018 and bar him from commenting publicly on political matters in exchange for being allowed to remain a refugee in the embassy. Assange never agreed to the protocol, which contradicts international refugee law guaranteeing freedom of expression. In addition there is protocol on WikiLeaks, which still has a working Twitter account.

“Ecuador”s President Lenin Moreno stated today that Assange has ‘violated the ‘conditions’ of his asylum’ and that he will ‘take a decision’ ‘in the short term” after @WikiLeaks reported on the existence of the #INAPapers offshore corruption scandal wracking his government,” WikiLeaks tweeted Tuesday.

WikiLeaks had reported about the scandal allegedly involving Moreno and his family with INA Investments Corp, though WikiLeaks has not published any documents related to the case. Moreno’s spokesman, however, has implied that WikiLeaks has. A search of Wikileaks’ website shows no such files.

According to Telesur English the scandal came to light in February when Ecuadorian legislator Ronny Aleaga told reporters he had “received a dossier anonymously filled with documents that will implicate Lenin Moreno and his family in alleged crimes of corruption, perjury and money laundering.” The dossier has come to be known as the INA Papers. 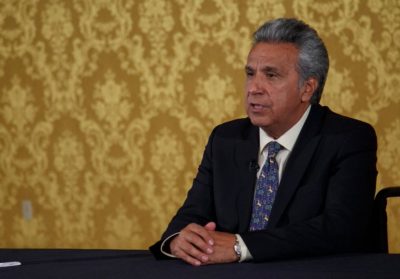 The story was first reported by the Ecuadorian news outlet La Fuente in an article titled: “The Offshore Labyrinth of the Presidential Circle.” Ecuadorian media reported that the attorney general’s office has initiated a preliminary investigation and that Aleaga would be summoned on Thursday to “give his version and acknowledge his complaint.”

The president of the National Assembly, Elizabeth Cabezas, has also come under investigation after allegedly trying to prevent an investigation into the scandal, the state-owned El Universo newspaper reported.

The embattled Moreno has lashed out at WikiLeaks and Assange.

“The Australian founded the WikiLeaks portal, which in the last days broadcast press releases and images of the private life of President Lenin Moreno. The leaks made by WikiLeaks on electronic communications of the president Lenin Moreno will motivate legal actions, on the international level, against the directors of said website, as announced by the Chancellor of Ecuador José Valencia.”

Moreno appears to have attempted to deflect from the growing scandal by using it as a pretext to blame WikiLeaks and expel Assange.

The former consul at the Ecuadorian embassy in London, Fidel Narvaez, countered Moreno’s accusationby saying that WikiLeaks never published the INA Papers, but merely tweeted about the subject.

“It is absurd that the government of Lenin Moreno intends to link Assange with publications of pages totally unrelated to Wikileaks, or with contents of the New York Times, and it would be ridiculous for the prosecution to investigate a “leak” that does not exist, but only in the false news published by the newspaper that you [Lenin Moreno] direct.”

He added: “Exactly one year ago, the government of Lenin Moreno has isolated Julian Assange in a regime that is almost a prison, who since then has not issued a single tweet. The government is looking for a pretext to end Julian’s asylum and prepares the conditions to subject the country to historical humiliation.”

In a separate article, translated electronically, Narvaez argued: “Despite being an outrageous accusation, the farce has gone so far that the Ecuadorian National Assembly has issued a resolution to investigate Julian and that it emboldens the government to take measures to ‘Protect national interests.’ In short, the government seeks a false pretext to end the asylum and protection of Julian Assange.” 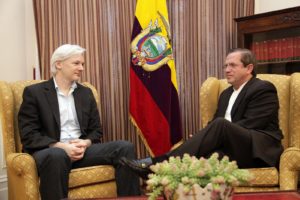 Attorney and author Eva Golinger, a Latin America analyst, also wrote via Twitter (translated electronically): “This [accusation] is completely false. Wikileaks did not leak any document about the corruption of Lenin Moreno. They only sent a tweet referring to the evidence about the illicit actions of Lenin that had been published by other media. Blaming Assange is irresponsible.”

Golinger added in a separate tweet: “These false accusations are part of @Lenin’s efforts to justify the illegal rendition of Julian Assange to the United States. Since there is no legal basis for doing so, they are making things up. Dangerous, irresponsible and an abuse of human rights.”

Moreno’s accusations were echoed by major Ecuadorian news outlets such as el Telegrafo, which reported that Ecuador’s secretary of communication had accused Venezuela’s President Nicolas Maduro of “financing the attacks of Julian Assange, to end the peace of Ecuador and the region, and even links the former Ecuadorian president in the plan.”

Last December, the The New York Times reported that in May 2017, Paul Manafort flew to Ecuador for negotiations with President Moreno, during which Moreno discussed handing over Assange in exchange for “concessions like debt relief from the United States.” The Times quoted “three people familiar with the talks, the details of which have not been previously reported.”

Assange sought and received asylum in the Ecuadorian embassy in London in June 2012. He fears that if he leaves the embassy he will be arrested for skipping bail and extradited to the United States for publishing classified documents. Under the previous government of President Rafael Correa, the Ecuadorian government was largely supportive of Assange, an attitude that has shifted markedly under Moreno. 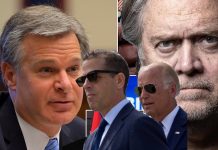