A crazed leftist with a mohawk attacked an elderly gentleman minding his own business inside of a Starbucks in Palo Alto, CA because he was wearing a red MAGA hat.

A ‘woman’ who goes by the name Parker Mankey, posted photos of the elderly Trump supporter to her Facebook page Monday and called on her Facebook friends to find out who the “freak” is and “confront him.”

Parker Mankey, who declared her support for Bernie Sanders, says screaming at him, stalking him and doxxing him is a way to fight back against Fascism.

“I yelled at him. Called the entire Starbucks to order and yelled at him more about how it is not ok to hate brown people,” Parker said. “He threatened to call the cops. I left after yelling at him some more.”

Parker the Fascist wasn’t done yet, though — she said she went back into Starbucks to yell at the peaceful elderly man some more and she wanted to find out who he was and where his kids lived.

“I went back in and yelled that I had changed my mind and wanted him to call the police because I wanted to know his name, where he lived, his wife’s name, and where his kids went to school,” Parker said in her FB post.

The elderly gentleman proceeded to gather his belongings and headed to the cash register where he reportedly complained about the crazed leftist screaming at him.

Parker says she followed the man to the cash register and “called him more names.” She bragged about calling him a “wimp” then “chased him out of Starbucks yelling at him to get the fuck out” of her town. 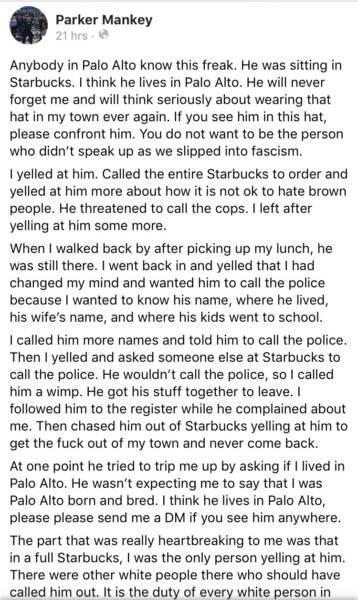