The media’s virtual blackout of the Harold Moody story is disturbing, considering the ties between Clinton and Moody, who were photographed together. Moody has met both Bill and Hillary Clinton, according to documented evidence.

Harold Moody was arrested in November for distribution and possession of child pornography after he was caught repeatedly in chat rooms in which he and others were sharing child pornography, including at least one video of adults having sex with a child. Moody pleaded not guilty.

“I’ve heard of White privilege but never Perv privilege – i am not the Juke Box at Waffle House…I do not play on demand…” Moody told fellow users in the chat room in response to video requests.

Moody was spokesman for the Democratic Party of Arkansas during the 2016 election and was previously the chairman of the Pulaski County Democratic Committee.

In November 2017, another employee of Pulaski County Youth Services was arrested for the alleged late-night rape of a 14-year old boy in a parked car.

In his capacity as state Democrat Party spokesman, Moody oversaw the selling of tickets to a Hillary Clinton fundraiser in July 2015.

The Times Record reported in 2015: “State Democratic Party spokesman H.L. Moody said the party sold all 1,600 floor seats for the $200-a-plate dinner, then began selling $15 arena seats. He estimated the audience at over 2,000 people — former state Highway Commissioner John Burkhalter said onstage that more than 2,500 were present — and said the party had raised about $450,000, enough to cover its entire annual budget. On Friday, Trump spoke to about 1,000 people in Hot Springs. He said during his speech that the Democratic Party had cut ticket prices to lure people to its event. Moody disputed that claim. “I reject the notion that we reduced ticket prices,” he said. “The floor seats sold for a higher ticket price than we’ve ever sold them before, and they also sold faster than they’ve ever sold before, and that’s why we opened the arena seats. The original plan did not call for arena seats, but we had to open them up because there was so much demand for tickets.’”

Moody praised Hillary Clinton in an interview with the Arkansas Times after Clinton’s defeat in the 2016 election and said that Bill Clinton’s presidential election in 1992 inspired him to get into politics.

“I think Secretary Clinton summed it up best when she said (at a charity gala on Nov. 16) that there were days when she wanted to curl up and never leave the house. I totally get that, but, as somebody that pays the electric bill by working in politics, I just don’t have that luxury. Also, the longer I am lying down and feeling bad, the longer they can say the DPA is dead, and that’s simply not the case,” Moody said in the interview.

“But then in 1992, when [Bill Clinton], who I had met at the duck calling contest in Stuttgart many times, was running, it suddenly became, almost in a way, personal for me. I think I was 12 or 11 at that point, so there wasn’t much I could do other than watch and learn. What I remember most is on election night, when [Clinton] won, I saw the live television footage of downtown Little Rock and the celebration and I knew I should have been there, that that was exactly where I was supposed to be. I guess since then I’ve been trying to get back to that place,” Moody said in the interview.

SILVER HAS LEFT THE STATION! 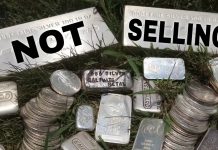 Why I’m NOT Selling My Silver