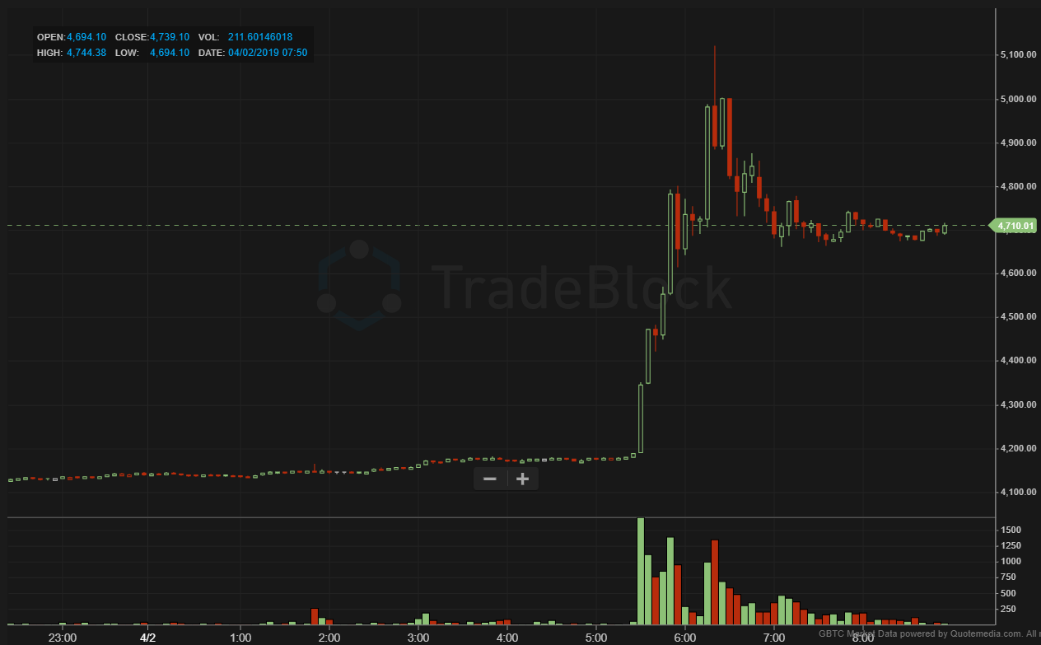 The CBOE may be regretting its decision to abandon Bitcoin futures trading this morning, when shortly after midnight Eastern time, bitcoin suddenly broke the calm that had blanketed the crypto space for over three months, when it exploded as much as 23% or $1,000 higher in minutes, rising briefly above $5,000, its highest level since November, and pushing the entire $160 billion cryptocurrency space sharply higher, with rival coins Ether, Litecoin also soaring, as did cryptocurrency-linked stocks including Remixpoint and CMC Markets Plc, as well as that old market favorite Riot Blockchain.

At its peak, the 23% intraday move, which added more than $17 billion to the value of digital assets, was the biggest since early 2014. Even after paring some gains, with bitcoin currently up just over 15% at $4,777.81, the daily swing was the biggest since the euphoric peak bubble days of late 2017.

Understandably, traders was keenly focused on identifying the catalyst behind the move although a clear reason for the sudden surge has yet to emerge. George Harrap, chief executive officer at Bitspark, told Bloomberg he’s putting “most things on pause” until the market settles down. His contacts in the Bitcoin community have yet to identify a catalyst for the sudden jump.

“The reason why? Anybody’s guess at the moment,” Harrap said, as analysts could not point to any specific news or developments in the cryptocurrency sector that could explain the mystery buyer’s big order.

Some of the potential triggers cited on trading desks and in social media included a sizable block of expiring puts, short covering by traders who had stop-loss orders around the $4,200 level and an April Fool’s Day story on a little-known online news site claiming that the U.S. Securities and Exchange Commission had approved Bitcoin exchange-traded funds, although that was quickly discounted as the gains persisted even after the story was discounted.

“There has been a single order that has been algorithmically-managed across these three venues, of around 20,000 BTC,” he said. “If you look at the volumes on each of those three exchanges – there were in-concert, synchronized, units of volume of around 7,000 BTC in an hour”.

Another possible reason: crypto vol has troughed, prompting renewed interest in the asset class by investors seeking volatility at a time when cross-asset vol has likewise collapsed.

Another theory: renewed interest in money “offshoring” by Asian and/or Turkish investors.

Of course, it may well be the case that with all central banks once again caught in a rush to debase their currencies and ease monetary policy, investor interest is once again turning to fiat money “alternatives.”

Outsized price moves of the kind rarely seen in traditional markets are common in cryptocurrency markets, where liquidity is thin and prices highly opaque. So orders of large magnitude tend to spark buying by algorithmic traders, said CryptoCompare’s Charlie Hayter.

As bitcoin surged, there were 6 million trades over an hour, Hayter said – three to four times the usual amount, with orders concentrated on Asian-based exchanges. “You trigger other order books to play catch up, and that creates a buying frenzy.”

To be sure, bitcoin susceptibility to unexplained, erratic price swings is nothing new and made it very popular among speculators, who are seeking a return to the glory days of 2017 when Bitcoin surged more than 1,400%. However, since its peak around $20,000 in late 2017, bitcoin suffered a 74% crash which eliminated much if not all of the froth in the former asset bubble.

Of course, erratic moves such as this one have deterred institutional investors, whose concerns about cryptocurrencies range from uncertain regulation to exchange hacks and market manipulation.

Predictably, the skeptics promptly emerged despite the sudden price gains which pushed the price of bitcoin back to levels last seen in November 2018 when the crypto broke down below a former support just above $6,000:

“Events such as today’s will probably be seen negatively, or viewed as this market doesn’t conform to the trading of traditional instruments,” said Dave Chapman, CEO of crypto exchange ANXONE. “We have to realize that this asset class is only a decade old, and it only started getting mainstream attention five years ago.”