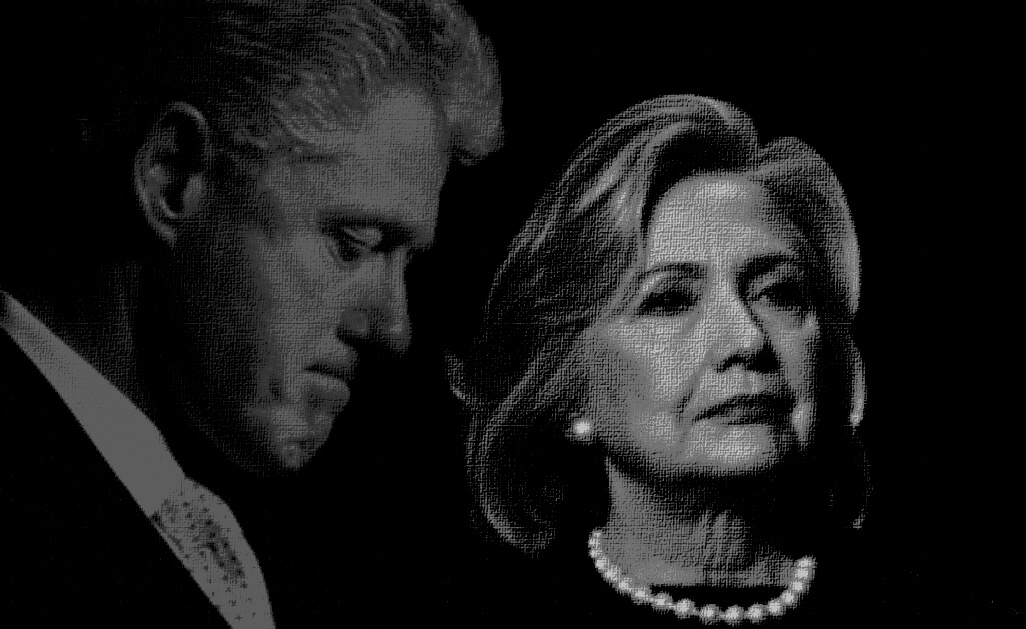 The question on everyone’s mind – are Bill and Hillary Clinton connected to or involved with child sex trafficking or child labor trafficking networks – or, are they advocates for children as they portray themselves to be? Though, the focus is on both Bill and Hillary, this report will primarily break down a timeline of Hillary’s work as it relates to children, in addition to both of their connections with individuals who have been indicted and/or convicted of crimes against children – because they are stacking up. The information that follows will provide facts, for each person to use their own discernment in determining what they believe to be truth, or until further information is revealed.

1970: Worked at Yale Child Study Center, learning about early childhood brain development, and research assistant on the book Beyond the Best Interests of the Child, and handled cases of child abuse at Yale–New Haven Hospital

1971: Met husband Bill, interned at law firm Treuhaft, Walker and Burnstein where she worked on child custody and other cases

1973: Postgraduate study on children and medicine at Yale Child Study Center, her article “Children Under the Law” was published in the Harvard Educational Review, staff attorney at Marian Wright Edelman’s Children’s Defense Fund in Cambridge, MA, consultant to Carnegie Council on Children

1977: Co-founded Arkansas Advocates for Children and Families – a state level alliance with Children’s Defense Fund, and worked pro bono in child advocacy during her work at Rose Law Firm

1988-92: Children’s Defense Fund Chairman of the Board and on the board of the Arkansas Children’s Hospital’s legal services

1995: Wrote an article on orphaned children that led to the Adoption and Safe Families Act in 1997

1996: Published book “It Takes A Village: And Other Lessons Children Teach Us

1997: Supported State Children’s Health Insurance Program, and promoted nationwide immunization against childhood diseases; hosted child care conference and early childhood development and learning conferences at White House; initiated and shepherded the Adoption and Safe Families Act which required states to terminate parental rights for children in foster care for 15 out of 22 months and provided funding for efforts in encouraging adoption as well as subsidies for adoptive children up through age 18; By executive memorandum, her husband President Bill Clinton added the “Adoption 2002 Initiative” which aimed to lower barriers to adoption so as to double the rate of adoption by 2002

2000: Hosted children and adolescents conference and conference on teenagers at White House

2005: Introduced the Family Entertainment Protection Act with other senators to protect children from inappropriate content found in video games

2007: Via Clinton Health Access Initiative, worked in Pakistan to train nurses and midwives to perform both births and abortions

2009: Via Clinton Health Access Initiative, worked in Zambia, Malawi, Haiti, Mexico and Central America to train nurses and midwives to perform both births and abortions.   Partnered with the Polaris Project who runs the National Human Trafficking Resource Center and Hotline, and is also a Clinton Global Initiative member, to build an “Anti-trafficking approach replicable worldwide.”

2010: Clinton Health Access received $25 million from IKEA for CHAI to join the “Every Woman Every Child” initiative so CHAI can partner with governments to educate moms on the right treatment for their child’s diarrhea and encourage manufacturers to develop child-friendly formulations, with a focus in Kenya, Madhya Pradesh and Uttar Pradesh.

2013: Through Bill, Hillary & Chelsea Clinton Foundation focused on early childhood development and initiative “Too Small to Fail” led by former Australian Prime Minister Julia Gillard to encourage girls worldwide to enroll in secondary schools; Lead “No Ceilings: The Full Participation Project,” a partnership with Bill & Melinda Gates Foundation to study data on progress of girls and women around the world; Via Clinton Health Access Initiative, launched a 7-year health program in Rwanda with Ivy Leagues from the U.S. and $150 million from the U.S. Government, to train over 6,000 young women to be nurses and midwives for performing both births and abortions.

2018: Campaigned for women’s right to abortion, and cheered Governor Cuomo’s on, leading up to his announcement of passing New York’s new abortion laws allowing abortions up to full term, which removed legal protections for failed abortions where babies are born alive – meaning, they allow them to die.

Does all of this involvement with children equate to people who are advocating for children, or is it cover for other nefarious actions? Review all of the information below to draw conclusions.

Last year, the Clinton Health Access Initiative (CHAI), another entity that was never filed properly and is operating illegally, received over US$1.1 million for an award from the Bill & Melinda Gates Foundation – a huge contributor to the Clintons, and NORAD – who also helped fund their Ten Island Challenge program. The award was allegedly for saving the lives of mothers and newborns.

Back in the mid 1990s, Belgium reached out to the National Center for Missing and Exploited Children, in request for assistance with their missing children issues. The NCMEC’s Board of Directors authorized the creation of a new organization that would devote itself to doing globally what NCMEC was committed to doing in the United States. In 1998, members of the Board of the newly created International Center for Missing and Exploited Children (ICMEC) held their first meeting, and in April 1999 it was launched by then First Lady Hillary Clinton, Lady Catherine Meyer, and Cherie Booth Blair, wife of former British Prime Minister Tony Blair. The full archived press release can be viewed here.

Richard Branson’s mother, Eve Branson, was a founding board member of ICMEC in 1999 and served on the Board of Directors until 2005. Richard Branson was ICMEC’s founding sponsor. ICMEC is a 501(c)(3) tax-exempt charity supported entirely by private funds and resources, and is headquartered in Alexandria, Virginia. It is a non- government agency. It also has an Asia-Pacific office and Latin America & The Caribbean office. Since their inception, they have helped to create four national or regional missing and exploited children’s centers around the world. One of those is the Global Missing Children’s Network (GMCN), which happened to launch in 1998, the same year ICMEC launched. There are 29 member countries on 5 continents allegedly working to help recover missing and abducted children.

In a photo of the Board of Directors provided on Wikipedia, Eve Branson along with her son Richard Branson, and a lot of other familiar faces are pictured.

Bill and Hillary Clinton’s ties with Richard Branson go way back, as well as forward. They are all currently working together on The Ten Island Challenge pilot program, which launched in 2012 and began with ten islands, and quickly evolved to over twenty islands, all throughout the drug and child trafficking transits in the Caribbean. Since their inception, they have now branched out to form alarming new partnerships and focus on the tourism and hotel industry. This Ten Island Challenge program, funded by GEF, an arm of the World Bank, OPIC, the Dutch postal code lottery, and the Norwegian government, has allegedly set out to setup islands with solar farms and renewable energy.

Most of these Caribbean islands have been deemed tier 2 & 3 and are subject to U.S. aid restrictions due to their level of human trafficking and subjecting large populations to modern slavery – as the documentation reveals in this report. Based on Hillary’s portrayed background in fighting for children’s rights, why then would she wish to focus her energy on setting up a small solar farm to feed a block of homes on each of these islands – all of which include free solar systems to the government buildings – rather than fighting for the suffering children that reside on these islands?

Another important and relevant fact to include, is that Planned Parenthood setup the Caribbean family Planning Affiliation on 10 of those islands as well. The same year Clinton’s Ten Island Challenged launched, Planned Parenthood Federation announced their plan to training youth leaders in Latin America, Africa and the U.S., as well as their desire to combat the vulnerability of youth to unintended pregnancy and unsafe abortion. Why is this relevant? Because the Clintons have been working with Planned Parenthood since 1993 when Bill Clinton removed the “gag order” to secure ongoing funding for clinics performing abortions, and both have been training midwives and nurses to perform abortions in multiple countries, which all began in New York City.

Back to ICMEC: To understand the magnitude of ICMEC’s reach, in a 2014 report for the United States Senate Committee on Foreign Relations pertaining to “International Parental Child Abduction” it states that ICMEC has trained law enforcement in 121 countries. They have reviewed laws in 200 countries and worked with parliaments in 100 countries to enact new law on child pornography. They built a global missing children’s network to include 22 countries, established national centers in multiple countries, and created a regional center in Europe, serving 13 countries in the Balkan region.

In addition, they met with 400 Arab leaders in Cairo to create an agreement on child protection. They also partnered with the Vatican, Mayo Clinic and Il Telefono Azzurro to create ‘The Declaration of Rome’ on children’s rights. And finally, they entered into formal partnerships with Interpol, and launched a Global Health Coalition of pharmaceutical companies and health care institutions to address a public health crisis with child sexual abuse.

Ted Cruz: Big Tech Believes It Has Authority over What the Press Is Allowed to Report