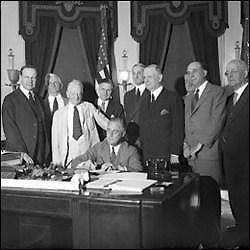 As both the interim and final report from your Royal Commission into Misconduct in the Banking, Superannuation and Financial Services Industry has confirmed, the good, decent, hardworking people of Australia are under attack from their own banking system in a manner reminiscent of an attack from a foreign invader that wants to destroy the will and financial resources of the citizens in order to gain absolute control of the country.

Americans, more than any other people in the world, can understand and relate to the precarious predicament in which you now find yourselves. The devious vices and devices of your banksters to transfer the meager savings of the common man and woman to their own greedy pockets have been laid bare by your Royal Commission. But just as happened here in the United States following the report of the Financial Crisis Inquiry Commission, no concrete measures to end the domination of the banks has occurred.

Australians, like Americans, remain on the road to financial ruin at the hands of predatory banking behemoths that are using their concentrated money and political power to attack each and every democratic principle that we cherish as citizens – from repealing consumer-protection legislation to installing their own shills in government to regulatory capture of their watchdogs to corrupting the overall financial system that underpins the stability of our two countries. Sadly, citizens at large do not understand that their own deposits at these mega banks are being used to accomplish these anti-democratic goals.

What has now occurred in Australia is precisely what has occurred in America. Last year Bob Katter, MP in your House of Representatives, introduced the Banking System Reform (Separation of Banks) Bill 2018 in the Australian Parliament. This year, Senator Pauline Hanson introduced a bill of the same name in the Australian Senate. The legislation is tailored after the 1933 legislation that was passed in the United States, the Glass-Steagall Act, to defang the banking monster that brought on the 1929 stock market crash and ensuing depression by separating commercial banks, which take in the deposits of risk-adverse savers, from the globe-trotting, risk-taking, derivative-exploding investment banks. (An unsavory group of bank shills succeeded in repealing the Glass-Steagall legislation in the U.S. in 1999 and then enriched themselves from the repeal. One year later the U.S. experienced the dot.com bust and eight years after that the country experienced the greatest financial crash since the Great Depression – what you call the GFC or Global Financial Crisis but U.S. bank lobbyists prefer to dub The Great Recession.)

U.S. Senator Elizabeth Warren, a Democrat, and the late Senator John McCain, a Republican, had been introducing the 21st Century Glass-Steagall Act for the past five years in the U.S. Congress. Just like the legislation proposed in Australia, it would have restored integrity to deposit-taking commercial banks by separating them from the predatory investment banks that financially incentivize their employees to fleece unsuspecting customers while using the deposits to engage in high-risk gambles that regularly implode. The powerful mega banks in the U.S. and their legions of lobbyists have worked hard to prevent this legislation from gaining momentum.

Despite the critical need for this legislation in both countries, mainstream media has not done its share to inform and educate the public about the pending legislation. We know this to be true in Australia because the Royal Commission received more than 10,000 submissions from the Australian public while the Senate’s request for public comment on the Glass-Steagall legislation has thus far received just 350 responses. The Senate Committee has elected to publish just a sliver of those responses.

Rick Rule: The Gold Bull Market Has Just Started. Are You Ready This Time?