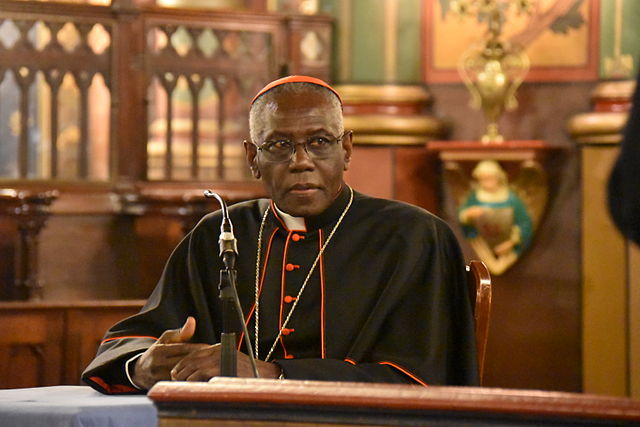 This truth-teller could be the next Pope.

The prominent Vatican Cardinal Robert Sarah, as his newly released book is causing furor in Europe, said it is wrong to “use the word of God to promote migration.”

The Guinean cardinal, prefect of the Vatican’s Congregation for Divine Worship, said that using the Bible to promote migration constitutes “false exegesis,” adding that it is better “to help people flourish in their culture than to encourage them to come to Europe.”

In an interview last week, the cardinal condemned the Church’s push for migration into Europe in the strongest terms, insisting that most immigrants wind up “without work or dignity” and assume the condition of slaves.

“Is that what the Church wants?” he asked, adding that the Church should not support “this new form of slavery that is mass migration.”

The cardinal also said that the demise of Christian Europe does not bode well for the future of the world.

“If Europe disappears, and with it the priceless values of the Old Continent, Islam will invade the world and we will completely change culture, anthropology, and moral vision,” he warned.

Cardinal Sarah has recently published a new book titled Evening Draws Near and the Day is Nearly Over (from Luke 24:29), in which he laments the “collapse of the West,” as well as the “migratory processes” that threaten Europe’s identity.

The cardinal insists that he wrote the book not to discourage believers but to “give hope” to all God’s people. “This is not the end of the world, the Church will rise,” he said.

He also mocked virtue signallers and those who refuse to defend the moral traditions of the Catholic Church:

In his interview, however, the cardinal pulls no punches in decrying what he sees as a betrayal of many of the Church’s pastors to preach the true Gospel of Christ and, instead, waste their time in political activism.

“In the Church there have always been betrayals. Today, I can say without fear that some priests, some bishops and even some cardinals are afraid to proclaim what God teaches and to transmit the doctrine of the Church. They are afraid of being seen as reactionary,” he said.

“And so they say confusing, vague, inaccurate things, to escape any criticism, and to enlist in the stupid evolution of the world. This is a betrayal,” he said.

“If he does not teach the faith, if he enjoys activism instead of reminding people that they are made for prayer, he betrays his mission,” Sarah said. “Jesus says, ‘I will strike the shepherd and the sheep of the flock shall be scattered.’ This is what is happening today. People no longer know who to turn to.”

There are some who “yield to the morbid, wicked temptation to align the Church with the current values of Western societies. Above all they want people to say that the Church is open, welcoming, attentive, modern,” he said.

“Some have adopted the ideologies of today’s world with the fallacious pretext of being open to the world. But instead we should bring the world to be open to God, who is the source of our existence,” he said.

The cardinal also offered his support for nationalist movements in Europe that wish to recover their sovereignty from Brussels.

“When I visited Poland, a country often criticized, I encouraged the faithful to affirm their identity as they have done for centuries,” the cardinal said. “My message was simple: you are first and foremost Poles and Catholics and only afterward Europeans. You must not sacrifice these first two identities on the altar of a technocratic Europe that recognizes no homeland.”

“The Brussels Commission thinks only about building a free market in the service of the great financial powers,” he continued. “The European Union no longer protects the peoples within it. It protects the banks.”

“This contemporary desire to globalize the world, ridding it of nations with their distinctive characteristics is sheer madness,” he said.

Here’s some more of what he said from The Daily Mail:

Sarah, from Guinea, who serves as the head of the Vatican’s liturgy office, added that he believed ‘Islam will invade the world’ if migration is not controlled.

‘If the West continues in this fatal way, there is a great risk that, due to a lack of birth, it will disappear, invaded by foreigners, just as Rome has been invaded by barbarians,’ he added.